Antimony is an element which is semi-metallic, hard and brittle. It is lustrous grey or silver colored and occurs in nature as sulfide mineral stibnite. Antimony is used to make semiconductor devices including infrared detectors and diodes and hence its usage in the electrical industry. It is also alloyed with other metals, such as lead and tin, to improve their strength and hardness. As a result, it is used for toughening solders, bullets cable sheathing and plain bearings and also to improve the rigidity of lead-alloy plates in lead-acid batteries. It is added to halogen containing flame retardants too.

The global antimony market is estimated to garner noteworthy revenue by the end of 2031 by growing at a CAGR of ~7% over the forecast period, i.e., 2022 – 2031. Further, the market generated remarkable revenue in the year 2021. Higher utilization of antimony in battery manufacturing is anticipated to be one of the major growth drivers of the market. For instance, the global demand for batteries was estimated to be approximately 180 GWh in 2020 and is further anticipated to reach more than 1,900 GWh by 2030. 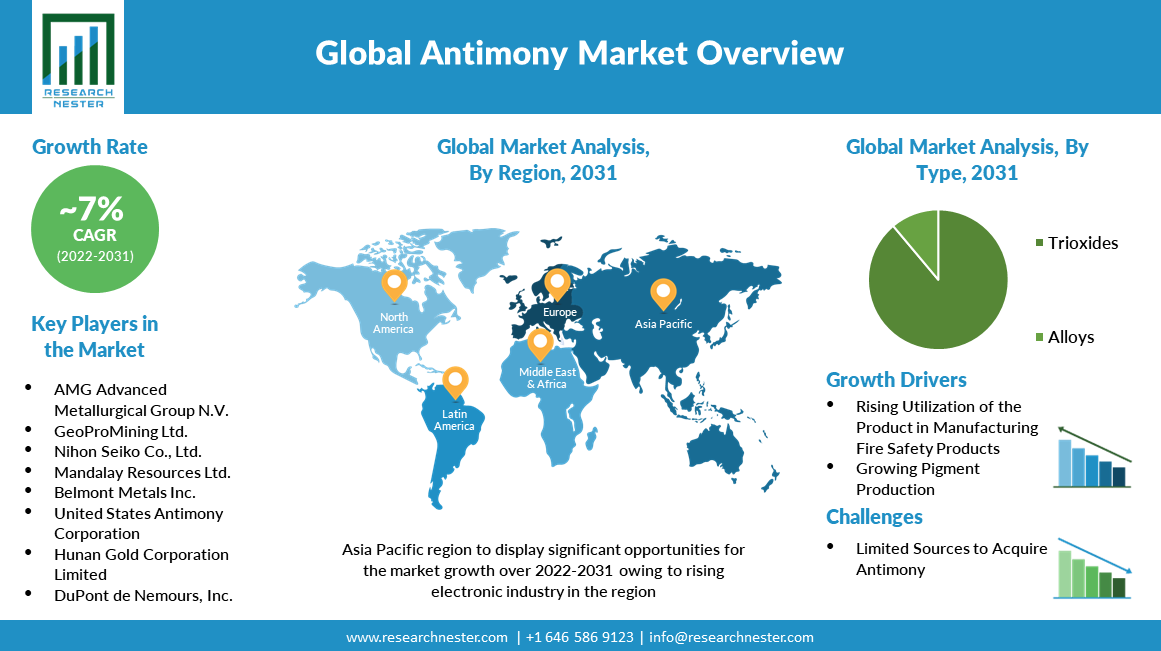 The global antimony market is estimated to witness remarkable growth on the back of the up-surged requirement of antimony in fire safety. Although antimony has no flame retardant properties, when it is utilized with halogenated compounds, it creates flame retardant properties owing to the synergistic effect. Institute for Health Metrics and Evaluation released a set of data showing that more than 120,000 deaths were caused due to heat-related incidents in 2017 across the globe. Hence, such demand and requirement for antimony are projected to propel the growth of the market over the forecast period.

The value of glass-ceramic was estimated to be around USD 1 billion in 2021 which is further expected to reach approximately USD 1.5 billion by the year 2026.

Cable sheathing is generally associated with fiber cable technology which is highly utilized to circulate internet services. World Bank released a set of data showing that in 2020, 60% of the global population was using the internet. 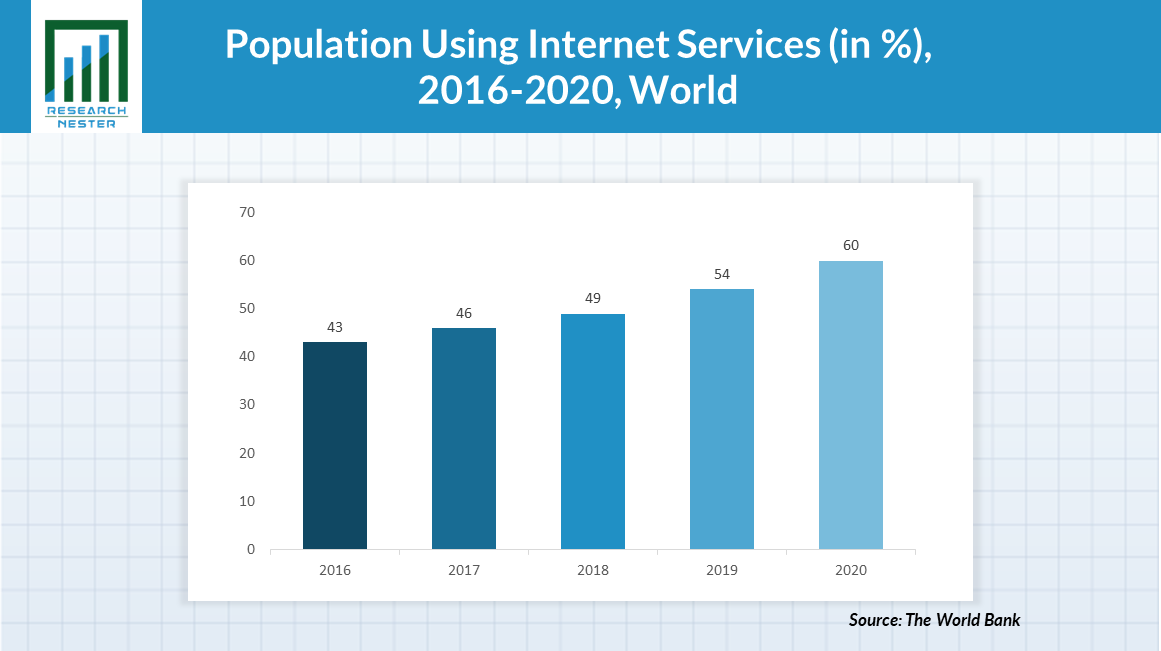 As of 2020, the flame retardants industry was valued at approximately USD 7 billion which is further forecasted to reach around USD 15 billion in 2030.

The worth of the paint & coating industry is projected to reach more than USD 195 billion by the year 2018.

The Li-ion battery recycling industry is anticipated to reach around USD 10 billion by the year 2027.

The global antimony market is segmented and analyzed for demand and supply by type into alloys and trioxides, out of which, the trioxides segment is anticipated to hold a notable share in the global antimony market during the forecast period on account of its higher utilization in pigments, ceramics, as a flame-proofing agent, staining of copper and iron. Antimony trioxides are also utilized in the decolorizing of glass. For instance, the revenue of the dyes and pigments industry is projected to reach about USD 1100 million by the year 2015.

Regionally, the global antimony market is studied into five major regions including North America, Europe, Asia Pacific, Latin America and Middle East & Africa region. Amongst these markets, the market in the Asia Pacific region is projected to hold the largest market share by the end of 2031. The growth of the market is ascribed to the developing electronic and automotive industries in the region. For instance, the electronic industry in the Asia Pacific region amounted to about USD 250 billion in 2020. Additionally, higher demand for antimony in the automotive industry is further anticipated to propel the growth of the market over the forecast period. For Instance, revenue generated by motor vehicles and other parts dealers in the U.S. was estimated to be around USD 1 million in 2021. Furthermore, the total sale of light vehicles in the U.S. was estimated to be around 13 million units in 2021. Based on these factors, the market is estimated to grow rapidly in the region during the forecast period.

Furthermore, the global antimony market is also anticipated to obtain the second-largest share in the North America region. The growth of the market in the region is accounted to the constantly growing electronic industry and the growing awareness of fire safety. Data provided by the National Fire Protection Association (NFPA) demonstrated that in 2020, there had been about 1,388,500 fire incidents in the United States. 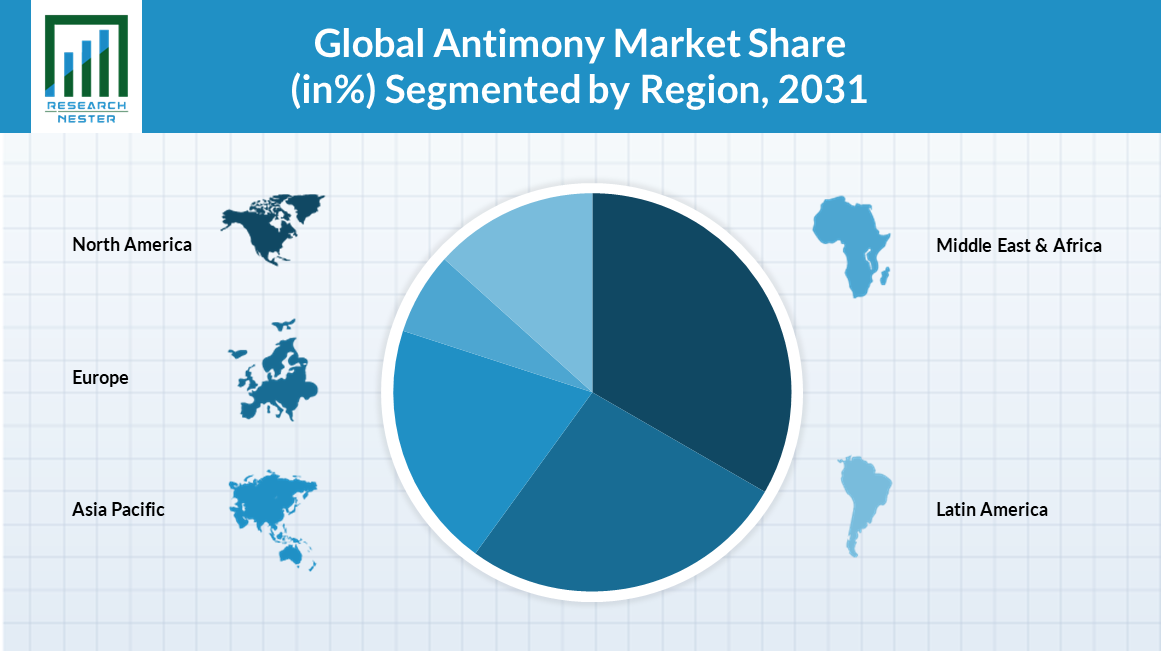 The global antimony market is further classified on the basis of region as follows:

Our in-depth analysis of the global antimony market includes the following segments: 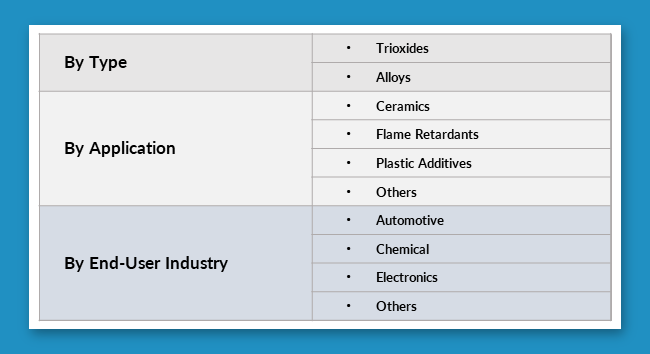 What are the major factors driving the growth of the antimony market market?

Growing awareness of the regulations associated with fire safety and significant utilization in plastic additive applications are the major factors driving the growth of the antimony market.

What would be the CAGR of antimony market market over the forecast period?

What are the challenges affecting the antimony market market growth?

The geopolitical tensions among countries associated with the convenient supply of antimony are estimated to hamper the market growth.

Which region will provide more business opportunities for growth of antimony market market in future?

The market in the Asia Pacific region is projected to hold the largest market share by the end of 2031 and provide more business opportunities in the future.

Who are the major players dominating the antimony market market?

What are the segments in the antimony market?

Which segment captures the largest market size in the type segment in the antimony market?

The trioxide sub-segment is anticipated to garner the largest market size by the end of 2031 and display significant growth opportunities.