Anti-Drone Market Segmentation by Technology (Kinetic, Laser, and Electronic System); by Application (Detection, Detection & Disruption, and Others); by End User (Commercial, Defence, and Others) and By Type (Hand-Held, UAV-Based, and Ground-Based) - Global Demand Analysis & Opportunity Outlook 2030

The global anti-drone market is estimated to garner a notable revenue by growing at a significant CAGR over the forecast period, i.e., 2021–2030. The growth of the market can be attributed to its ability to detect or intercept any unmanned aircraft (UAV), which helps to detect the presence of drones from kilometres away, identify the model type, and neutralize them. Moreover, anti-drone is a customizable integrated system that can include different types of solutions and equipment depending upon customer needs and requirements, including different combinations of drone neutralization equipment, UAV detection equipment and additional security solutions for enhanced level of protection. This customizable feature is estimated to boost its demand amongst different end-users. Furthermore, rising concerns over the potential security threats from unauthorized aircraft systems among both the military and civilian sectors, is anticipated to drive the market growth. Additionally, advancement in technology, along with increasing use of drones for professional, as well as leisure activities, is projected to boost the market growth. The global sale of drones amounted to over USD 20 billion in 2020, which is estimated to grow rapidly by the end of 2030. The increase in sale of drones, is estimated to promote the demand for anti-drone systems throughout the forecast period. 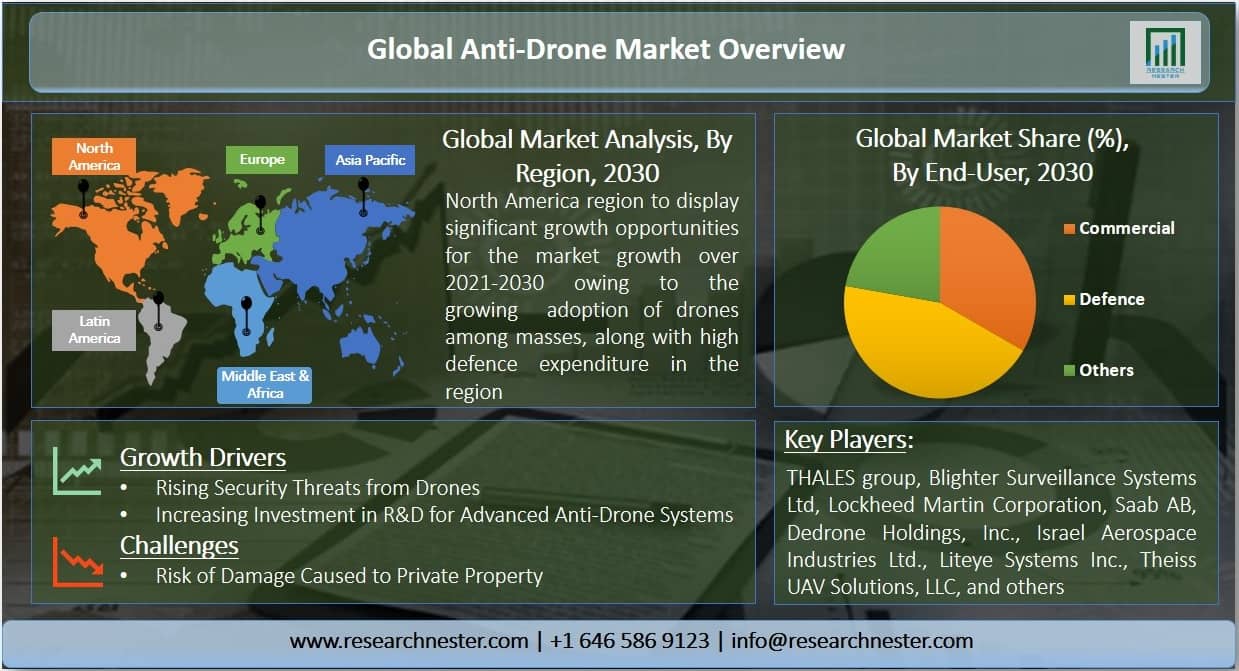 The global anti-drone market is segmented by technology into kinetic, laser, and electronic system, out of which, the laser system segment is anticipated to hold the largest market share during the forecast period, on the back of high accuracy and quick acting capability which makes it an appropriate technology for anti-drone systems. Additionally, the laser system offers significant flexibility, high precision, low cost per shot, and great speed which is estimated to boost the growth of the segment. On the basis of end-user, the market is segmented into commercial, defence, and others, out of which the defence segment is anticipated to hold the major share in the market, over the forecast period. This share can be attributed to the growing need for high security in military installations and other defence sites, in order to combat the threats posed by unauthorized drones.CLICK TO DOWNLOAD SAMPLE REPORT 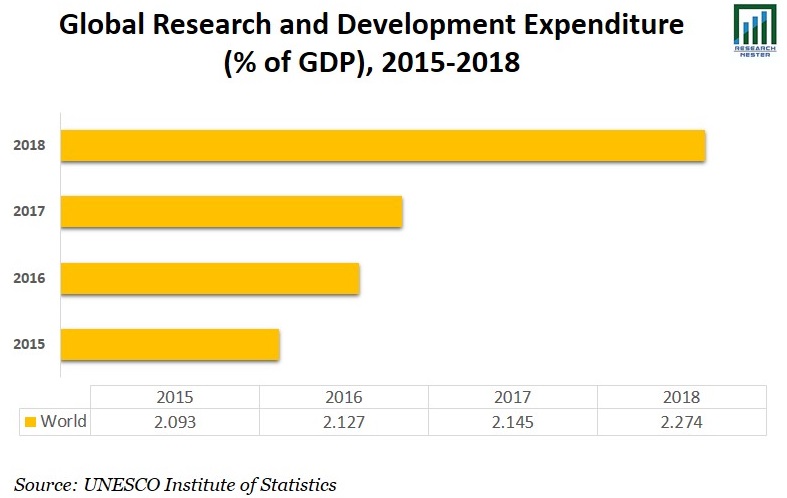 Regionally, the global anti-drone market is segmented into five major regions including North America, Europe, Asia Pacific, Latin America and Middle East & Africa region. The market in the North America is anticipated to hold the largest market share throughout the forecast period, on the back of presence of advanced defence system, along with high expenditure on defence sector in nations such as the United States. As per the data by the World Bank, North America spent 3.253% of its GDP on military in the year 2019. Moreover, the growing adoption of drones by the masses in North America, backed by the high disposable income, is estimated to boost the demand for anti-drone systems amongst the defence sector, along with other commercial end-users. The market in the Europe region is anticipated to witness notable CAGR over the forecast period, on the back of increasing security breeches in countries, such as, United Kingdom, Germany, Poland, Russia, and others, along with developing military system. 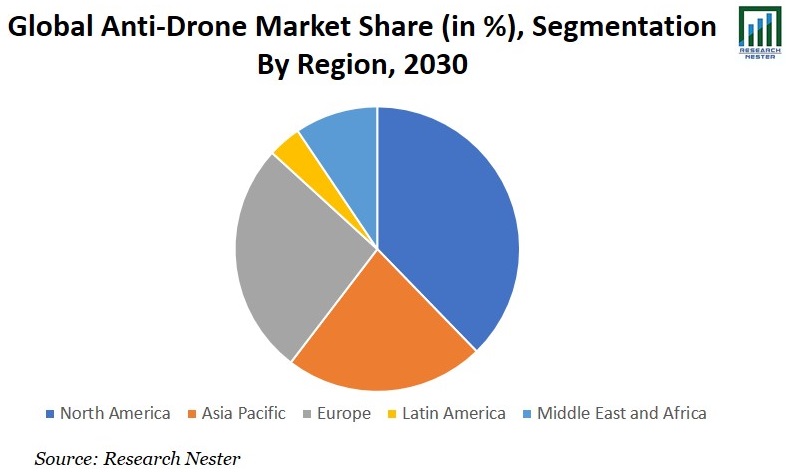 The global anti-drone market is further classified on the basis of region as follows:

Our in-depth analysis of the global anti-drone market includes the following segments:

What are the major factors driving the growth of the anti-drone market?

Increasing demand for anti-drone system amongst the defence sector to strengthen security and combat the threat of unauthorized drones is the major factor driving the market growth.

What would be the CAGR of anti-drone market over the forecast period?

What are the challenges affecting the anti-drone market growth?

The unwanted damage caused to the public property while jamming or destroying the unauthorized drone is estimated to hamper the market growth.

Which region will provide more business opportunities for growth of anti-drone market in future?

The North America region will provide most growth opportunities for the market, on the back of high government funding in the defence sector in the region.

Who are the major players dominating the anti-drone market?

What are the segments in the anti-drone market?

The market is segmented by technology, application, end-user, type, and by region.

Which sub-segment captures the largest market size in end-user segment in the anti-drone market?

The defence segment is anticipated to hold largest market size over the forecast period owing to the growing threats to public security by unmanned aerial vehicles.