The global animal genetics market is estimated to garner a revenue of ~USD 10067 Million by the end of 2033 by growing at a CAGR of ~6% over the forecast period, i.e., 2023 – 2033. Further, the market generated a revenue of ~USD 5407.0 Million in the year 2022. The growth of the market can primarily be ascribed to the spiking animal livestock population resulting in the higher requirement for healthcare data worldwide. It is observed that in 2022, the cattle population reached approximately 1000 million head which was an increase from around 900 million head in 2018. 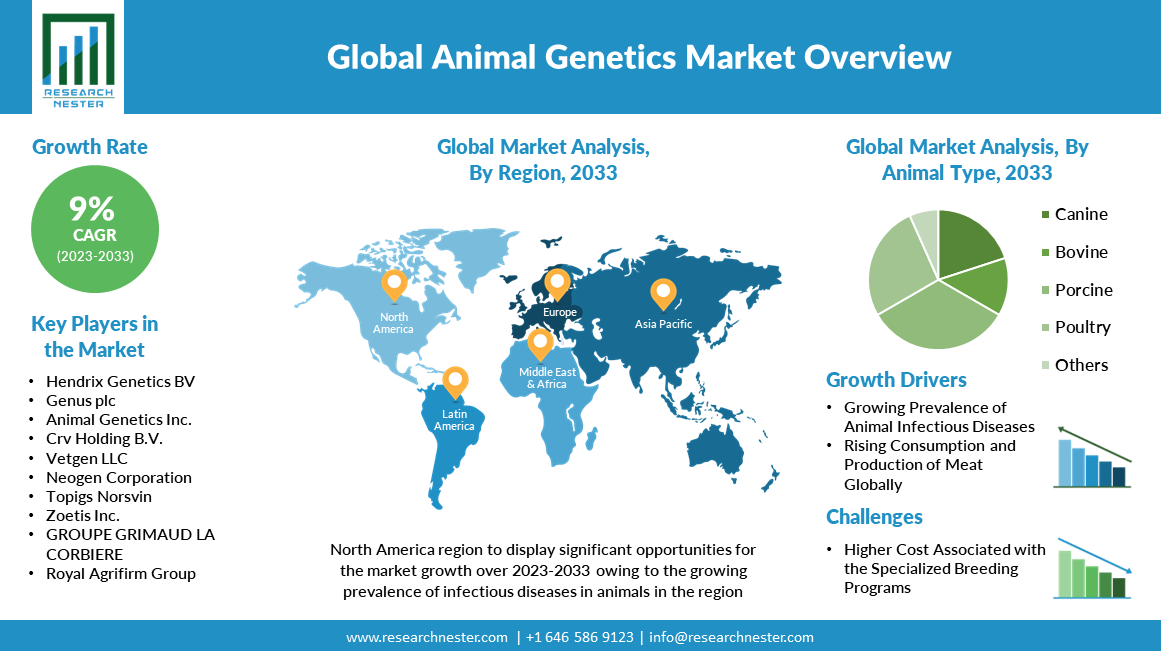 Get more information on this report:Request Sample PDF

Global animal genetics market trends such as, skyrocketing penetration of animal genetic companies, a growing number of undernourished populations worldwide, and significant growth in beef consumption are projected to influence the growth of the market positively over the forecast period. For instance, the production of beef and veal was estimated to be around 55 million metric tons in 2022 across the globe. Animal genetics is a vital part of livestock development, it is research on genes and their effects on animals. Animal genetics becomes important to enhance all aspects and for better production of products received from animals such as, eggs, meat, milk, fiber, and others. Hence, all these factors are estimated to propel the growth of the market over the forecast period.

The global animal genetics market is segmented and analyzed for demand and supply by animal type into canine, bovine, porcine, poultry, and others, out of which, the porcine segment has the highest market share of 31.15% in 2022. The growth of the segment can be accounted to the rising number and demand for pigs to obtain pork, hence, the need for animal genetics emerges to avoid any diseases spreading from pigs across the globe. For instance, the number of pigs was highest in China with over 400 million heads while in the United States, the were projected to be nearly 70 million heads in 2022.

The North America animal genetics market, amongst the market in all the other regions, is projected to hold the largest market share by the end of 2033. The growth of the market can be ascribed to the surged demand for high-quality breeds and the rising consumption and production of pork. As of 2021, approximately 25,000 million pounds of pork were produced in the U.S., up from almost 24,000 million pounds in 2018.

Our in-depth analysis of the global animal genetics market includes the following segments:

What are the major factors driving the growth of the animal genetics market?

Growing prevalence of animal infectious diseases and increasing demand for animal protein are estimated to majorly boost the market growth.

What would be the CAGR of animal genetics market over the forecast period?

What are the challenges affecting the animal genetics market growth?

The higher cost associated with the specialized breeding programs is estimated to challenge the market growth.

Which region will provide more business opportunities for growth of animal genetics market in future?

The market in North America, with the current highest market of 36.26%, is projected to keep holding the largest market share by the end of 2033 and provide more business opportunities in the future.

Who are the major players dominating the animal genetics market?

What are the segments in the animal genetics market?

The market is segmented by animal type, genetic material, genetic testing, and by region.

Which segment captures the largest market size in animal type in the animal genetics market?

The porcine segment, with the current highest market share of 31.15%, is anticipated to keep holding the largest market size by the end of 2033 and display significant growth opportunities.