Alzheimer’s disease is a disorder of the brain which commonly occurs among the older population. It is characterized by the gradual degeneration of the brain tissue, which eventually results in temporary or permanent loss of memory. According to the Alzheimer’s Association in 2020, an estimated 5.8 million people above the age of 65 in America are living with Alzheimer’s disease. This number is further predicted to increase to 13.8 million people above the age of 65 by 2050.

On the basis of region, the Alzheimer’s treatment market is segmented into North America, Europe, Asia Pacific, Latin America and Middle East & Africa. 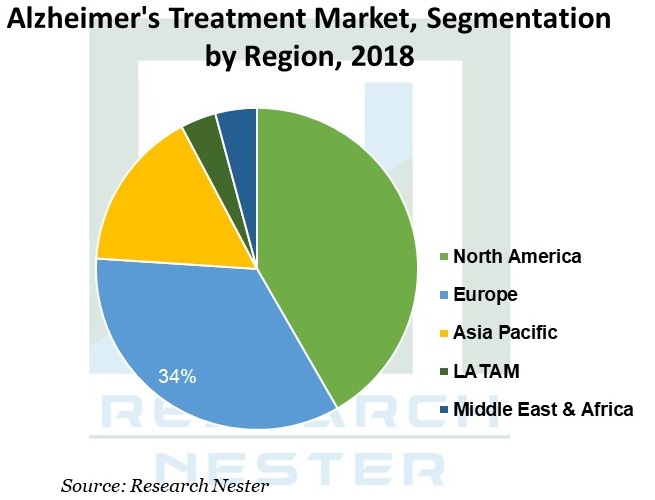 On the basis of drug class, the market for Alzheimer’s treatment is segmented into standalone drugs and combination drugs, out of which, the standalone segment is further sub-segmented into cholinesterase inhibitors and N-methyl-D-aspartate (NMDA) antagonist. The segment for standalone drugs is predicted to lead the market with highest market share, while the segment for combination drugs is anticipated to grow at the highest CAGR of 8.69% over the forecast period.

Based on the distribution channel, the market is segmented into online and offline segment, which is further segmented into hospital pharmacy and retail pharmacy. The offline distribution channel is anticipated to hold the leading share in the market on account of larger presence of hospital and retail pharmacies in the world. On the other hand, the segment for online distribution channel is predicted to grow at the highest CAGR of 8.12% during the forecast period. Over the years, the concept of online pharmacies has increased significantly owing to the various advancements in the e-commerce industry. The preference for online pharmacies is estimated to increase among the patients on account of various factors such as ease and convenience, confidentiality, low cost, and others. Additionally, they offer easy accessibility to people with limited mobility, thus attracting a lot of consumers. Furthermore, many online pharmacies deliver their products within a very short period of time, which has encouraged a wide range of patients to opt for it, thus contributing to the market growth.

The Alzheimer’s treatment market is segmented on the basis of product into wearable and non-wearable segments. The market for wearable devices is projected to witness the highest growth rate over the forecast period. A number of technological advancements have been made in the recent years in order to develop wearable devices for patients living with Alzheimer’s disease and providing them advanced treatment at home. Additionally, the wearable devices provide the care taker information about the movement, heart rate, pattern of sleep, among others, which is further estimated to attract a significant number of patients. Non-wearable devices segment is estimated to hold the leading share in the market with a market value of USD 10.09 million by the end of 2027.

On the basis of end user, the market is segmented into hospitals, clinics, nursing homes and home care settings. The segment for hospitals is anticipated to hold the leading share in the market in the coming years as a result of rising cases of Alzheimer’s disease that require admission of patients in hospitals for better care. Moreover, the segment for clinics is predicted to grow at the highest rate with a CAGR of about 10.12% over the forecast period. The rising number of clinics that offer treatment for Alzheimer’s disease is anticipated to fuel the market growth in the coming years. 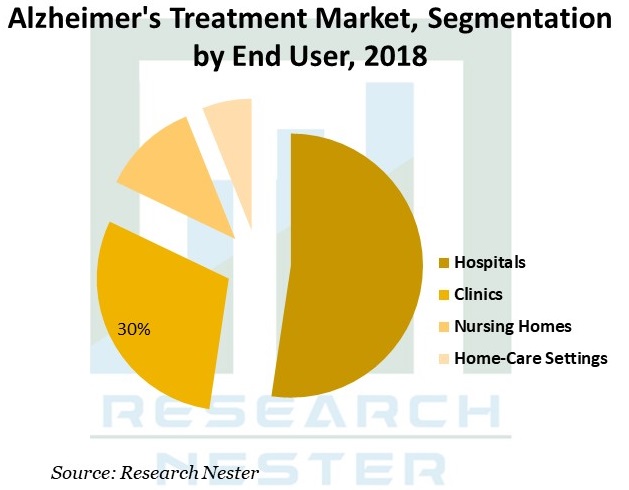 What are the major factors driving the growth of the Alzheimer’s Treatment market?

Growing cases of Alzheimer’s disease, especially among the elderly population is a major growth driving factor for the market.

What would be the CAGR of Alzheimer’s Treatment Market over the forecast period?

Which region is currently holding dominating share in the Alzheimer’s Treatment market?

Which region will provide more business opportunities for growth of Alzheimer’s Treatment market in future?

: Asia Pacific will provide more business opportunities for market growth on account of emergence of better healthcare facilities and infrastructure.

Who are the major players dominating in the Alzheimer’s Treatment market?