The global alpha-2 receptor agonists market is estimated to grow with a moderate CAGR during the forecast period, i.e., 2022-2030. The growing prevalence of hypertension and associated disorders, along with the increasing applications of alpha-2 receptor agonists are expected to fuel the progress of this market in the coming years. Along with this, the increasing elderly population and change in lifestyle patterns have given way to the prevalence of various metabolic disorders among people on a global scale, which is expected to lead to an increase in demand for drugs specialized in their treatment. Alpha-2 receptor agonists are increasingly being adopted for treatment as they can reduce blood pressure by inhibiting sympathetic activity in the brain, which in turn is anticipated to drive market growth in the future. The growth of the market can also be attributed to factors such as the rising consumption of unhealthy food, and growing alcohol and tobacco intake on a global level. Furthermore, rising number of incidences of hypertension in lower income nations is expected to provide growth opportunities to the market in the forecast period. According to the data collected from World Health Organization, it was estimated that in 2019, 1.13 billion people globally had hypertension, of which two-thirds of people were living in low and middle-income regions. 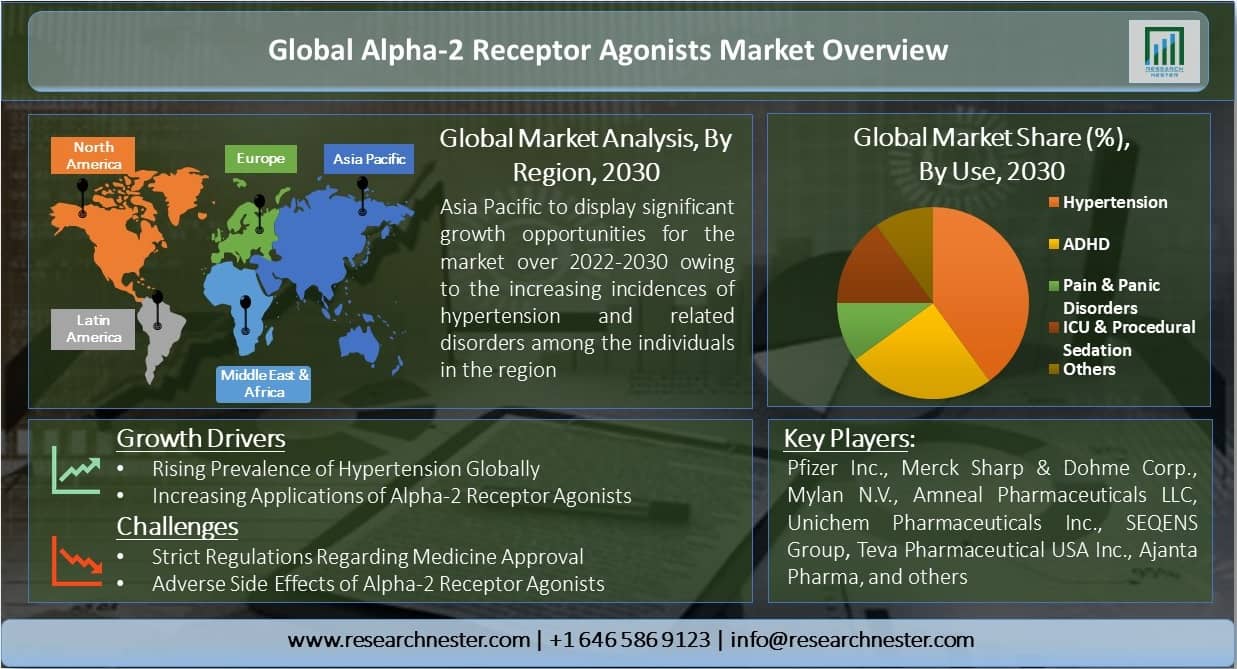 The market is segmented on the basis of use into hypertension, attention-deficit/hyperactivity disorder (ADHD), pain & panic disorders, ICU & procedural sedation, and others, out of which, the hypertension segment is anticipated to grab the largest share by the end of 2030 on account of high prevalence of hypertension worldwide. Moreover, the increase in consumption of unhealthy food which is one of the major risk factors for hypertension, is also projected to contribute to the growth of the segment during the forecast period. Additionally, on the basis of distribution channel, the hospital pharmacies segment in the global alpha-2 receptor agonists market is projected to grow with a significant CAGR over the forecast period. The growth of the segment can be attributed to the fact that a considerable portion of the population around the world with hypertension and associated disorders tend to choose hospital facilities for treatment.

Geographically, the global alpha-2 receptor agonists market is segmented into North America, Latin America, Europe, Asia Pacific and the Middle East & Africa region. The market in the Asia Pacific is predicted to grow at the highest CAGR over the forecast period owing to the increasing incidence of hypertension-related disorders and growing penetration of alpha-2 receptor agonists in the region. Furthermore, the market in North America is evaluated to occupy the largest share in terms of revenue during the forecast period, owing to the rise in prevalence of attention deficit/hyperactivity disorder (ADHD), accompanied by the presence of leading market players in the region. Along with this, North America also leads in terms of advancements in clinical research, which is also expected to contribute to the region’s market growth in the near future. Alternatively, the market in Europe is also anticipated to occupy a significant share on account of the increasing prevalence of cardiovascular diseases and rising awareness about hypertension in the region. As per the data published in the journal Annals of Global Health in 2020, cardiovascular diseases (CVD) are the leading cause responsible for deaths in Europe and accounts for 45% of the total number of deaths in the region. More than 4 million individuals in Europe suffer death annually from cardiovascular diseases. 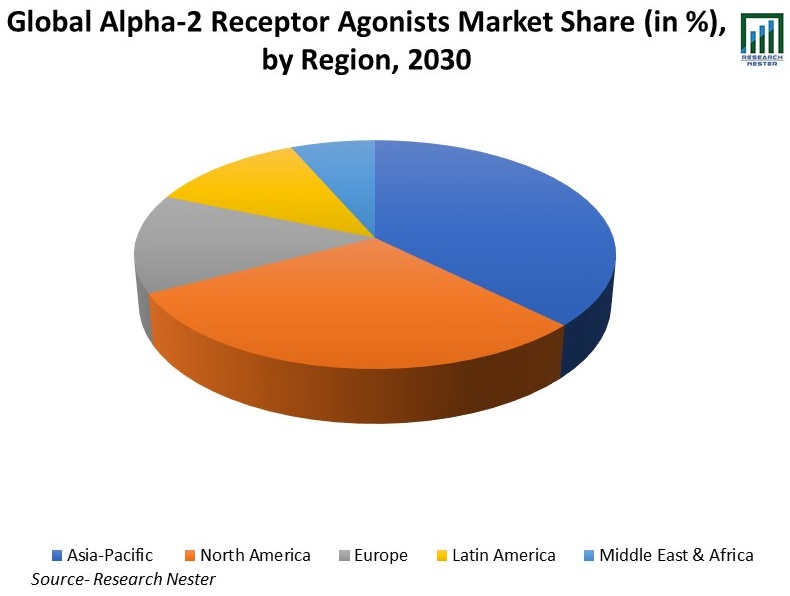 The global alpha-2 receptor agonists market is further classified on the basis of region as follows:

1) What are the major factors driving the growth of the alpha-2 receptor agonists market?

Ans: The increasing prevalence of hypertension and growing applications of alpha-2 receptor agonists are the key factors driving market growth.

2) What would be the CAGR of alpha-2 receptor agonists market over the forecast period?

3) What are the challenges affecting the alpha-2 receptor agonists market growth?

Ans: Strict regulations with medicine approval and the adverse effects of alpha-2 receptor agonists such as sedation & fatigue are estimated to hamper market growth.

4) Which region will provide more business opportunities for growth of alpha-2 receptor agonists market in future?

Ans: The market in Asia Pacific region will provide ample growth opportunities to the market owing to the increasing incidence of hypertension-related disorders among the individuals.

5) Who are the major players dominating the alpha-2 receptor agonists market?

7) What are the segments in the alpha-2 receptor agonists market?

Ans: The market is segmented by use, distribution channel, and by region.

8) Which segment under the distribution channel segment captures the largest market size in the alpha-2 receptor agonists market?

Ans: With respect to distribution channel, the hospital pharmacies segment is anticipated to hold the largest market share owing to the preference of the population with hypertension and associated disorders choose hospital facilities for treatment.