The global aircraft battery market is estimated to garner a revenue of USD 1068.7 Million by the end of 2030, by growing at a CAGR of 7.26% over the forecast period, i.e., 2021 – 2030. Moreover, in the year 2020, the market attained a revenue of USD 539.2 Million. The growth of the market can be attributed to growing demand for aircrafts, backed by the rising urbanization, and for the transitional shift towards electric aircrafts worldwide. According to the statistics by the World Bank, urban population as a share of global population increased from 43.029% in the year 1990 to 56.15% in the year 2020. On the other hand, according to the statistics by the General Aviation Manufacturers Association, the total number of aviation airplane shipments globally increased from 1132 units in the year 1994 to 2399 units in the year 2020. Batteries are a vital part of any modern aircraft as it is used in various applications, such as cranking of engine, starting standby power unit, canopy opening, and others. Over the last decade, the growth in passenger air travel has witnessed a massive growth, and is driving the need for advanced aircrafts. The surge in the adoption of aircrafts is therefore projected to drive the demand for aircraft batteries, and in turn drive the market growth. Moreover, growing adoption of commercial and recreational drones worldwide, along with the increasing effectiveness of aircraft batteries are also expected to create numerous opportunities for market growth. 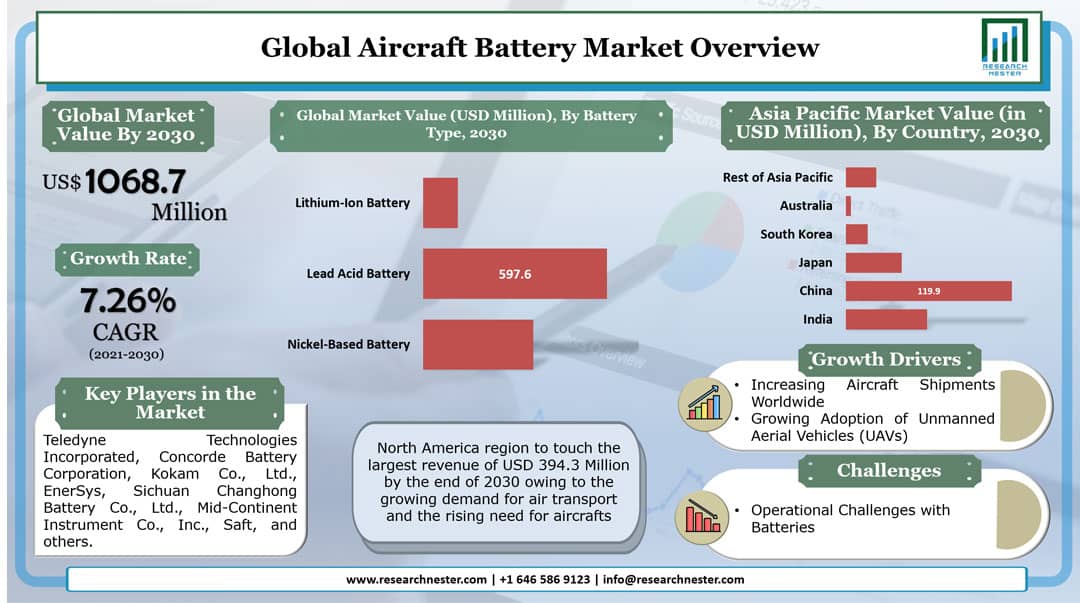 1) What are the major factors driving the growth of the aircraft battery market?

Ans: The rising number of aircraft shipments around the world is one of the major factors anticipated to drive the growth of the market during the forecast period.

2) What would be the CAGR of aircraft battery market over the forecast period?

3) What are the challenges affecting the aircraft battery market growth?

Ans: The operational challenges that remain with batteries is one of the major factors estimated to hamper the market growth.

4) Which region will provide more business opportunities for growth of aircraft battery market in future?

Ans: The market in the Asia Pacific is anticipated to display significant business opportunities in the coming years.

5) Who are the major players dominating the aircraft battery market?

7) What are the segments in the aircraft battery market?

8) Which segment captures the largest market size in battery type segment in the aircraft battery market?

Ans: The lead acid battery segment is anticipated to garner the largest revenue of USD 597.6 Million by the end of 2030 and display significant growth opportunities.