The AI-based electrical switch market is estimated to grow with a moderate CAGR during the forecast period, i.e., 2022-2030. The increasing use of AI technology in electrical devices, along with the growing demand for smart public and private infrastructure, are expected to fuel the progress of this market. The proliferation of AI technology has made inroads into the electrical devices sector owing to its capability to reduce human efforts and thus, increase convenience. Along with this, the growing global population and the consequent tendency of urbanization have raised the need to create smart infrastructure, which includes the use of smart switches in residences and public infrastructure. The growth of the market can also be attributed to factors, such as, the ability of AI-based electrical switches to reduce energy consumption, and the increase in awareness about using energy-efficient devices among consumers on a global level. According to the data collected from International Energy Agency, the energy intensity, i.e., the amount of energy used to generate a unit of GDP, of the world’s economy reduced by 36% between 1990 and 2018. The adverse impact caused by the rise in average global temperature due to carbon emissions has led the countries to declare joint action plans to tackle climate change. These actions include the technological solutions to reduce energy consumption. The adoption of novel technologies to curb environmental degradation is expected to boost the demand for AI-based smart switches, owing to their energy-saving capacity and the ability to minimize redundancies caused by the use of manual controls. Also, the increase in government initiatives to improve the efficiency of power consumption led to the rise in awareness for the benefits of smart electrical devices in emerging economies. CLICK TO DOWNLOAD SAMPLE REPORT 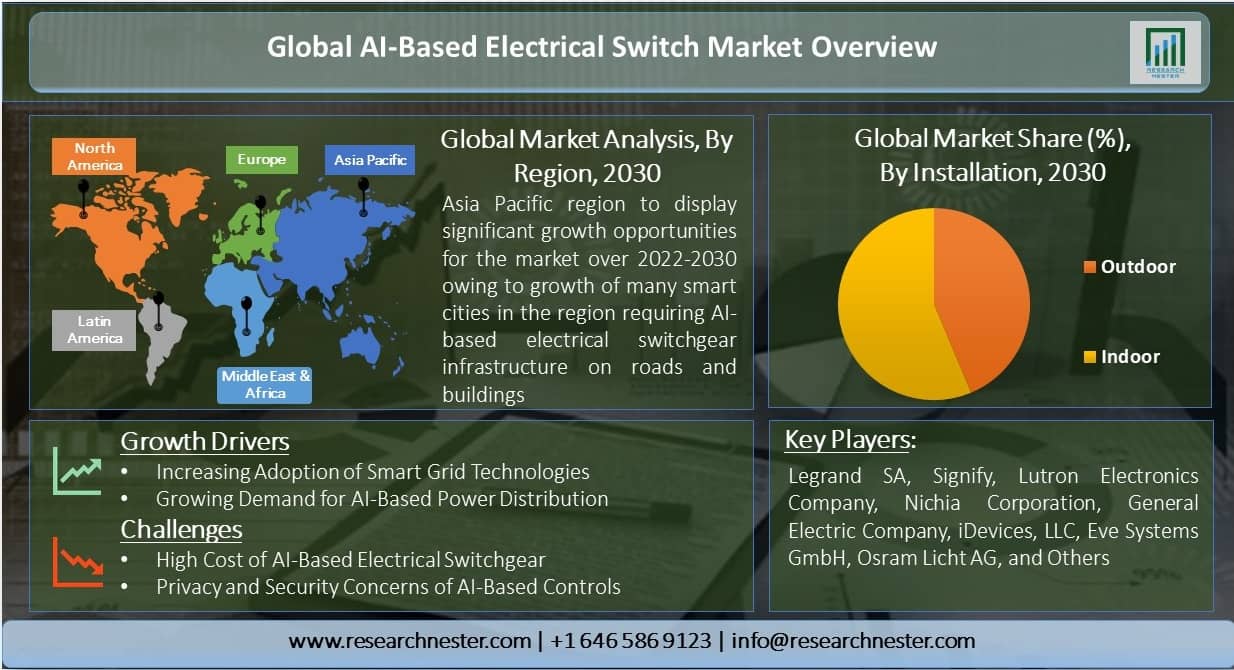 The market is segmented on the basis of installation into indoor, and outdoor, out of which, the indoor segment is anticipated to grab the largest share by the end of 2030 on account of higher rate of adoption of AI-based electrical switches in commercial and industrial establishments. Moreover, there has been a considerable growth of commercial sector in developing countries, which is also projected to contribute to the growth of the segment during the forecast period.

Geographically, the market is segmented into North America, Latin America, Europe, Asia Pacific, and Middle East & Africa region. The market in the Asia Pacific is predicted to grow at the highest CAGR over the forecast period owing to the growth of smart cities which require AI-based electrical switch infrastructure on roads & buildings on a large scale, and increase in per capita income in the countries of the region. Furthermore, in 2030, the market in North America is evaluated to occupy the largest share in terms of revenue, owing to the increasing use of AI-based smart switches for domestic use for energy management, accompanied by the rising adoption of these switches by commercial sector because of its cost-saving potential. Along with this, increasing government initiatives to adopt energy-efficient electrical solutions in the region are also expected to contribute to the market growth. Alternatively, the market in Europe is also anticipated to occupy a significant share in the AI-based electrical switch market throughout the forecast period on account of growing consumer awareness about AI-based electrical switches and government initiatives to encourage the use of smart technologies in the region. As per the analysis of European Environment Agency (EEA), total greenhouse gases emissions in European Union have decreased by 2 % in 2018, 17% since 2005, and by 23% since 1990. Energy efficiency is considered as one of the essential drivers of this. 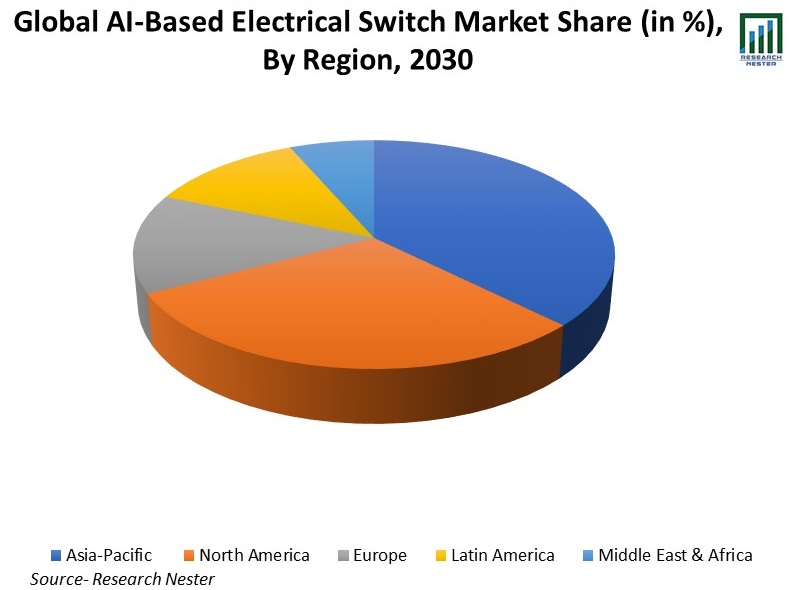 The global AI-based electrical switch market is further classified on the basis of region as follows:

What are the major factors driving the growth of the AI-based electrical switch market?

The increasing use of AI technology in electrical devices and the growing demand for smart public and private infrastructure are the key factors driving market growth.

What would be the CAGR of AI-based electrical switch market over the forecast period?

What are the challenges affecting the AI-based electrical switch market growth?

The high costs of AI-based electrical switches and privacy & security concerns of AI-based controls are estimated to hamper market growth.

Which region will provide more business opportunities for growth of AI-based electrical switch market in future?

The market in Asia Pacific region will provide ample growth opportunities owing to the growth of many smart cities in the countries of the region which require AI-based electrical switch infrastructure on roads and buildings on a large scale.

Who are the major players dominating the AI-based electrical switch market?

What are the segments in the AI-based electrical switch market?

The market is segmented by installation, end-user, and by region.

Which segment under the end-user segment captures the largest market size in the AI-based electrical switch market?

With respect to end-user, the commercial segment is anticipated to hold the largest market share owing to the increasing use of AI-based electrical switches in the commercial sector on a global level.