The acute care needleless connector market is estimated to grow with a moderate CAGR during the forecast period, i.e., 2021-2029. An increase in research and development costs to develop innovative connector solutions catering to the dynamic customer demands and improving healthcare practices towards eliminating the causes of needle-stick injuries and infections are anticipated to drive the growth of the acute care needleless connectors market during the forecast period. The advantages offered by needleless systems over conventional intravenous systems are expected to provide significant growth opportunities in the market in the coming years. The market is also gaining from the increasing disposable income of people in emerging economies, which has enabled them to spend comfortably on expensive treatments and afford costly medication and medical devices. According to the data collected from the World Data Bank, in 2019, the global GDP per capita was estimated to be USD 11,433 compared to USD 11,385 in 2018 and USD 10,827 in 2017. 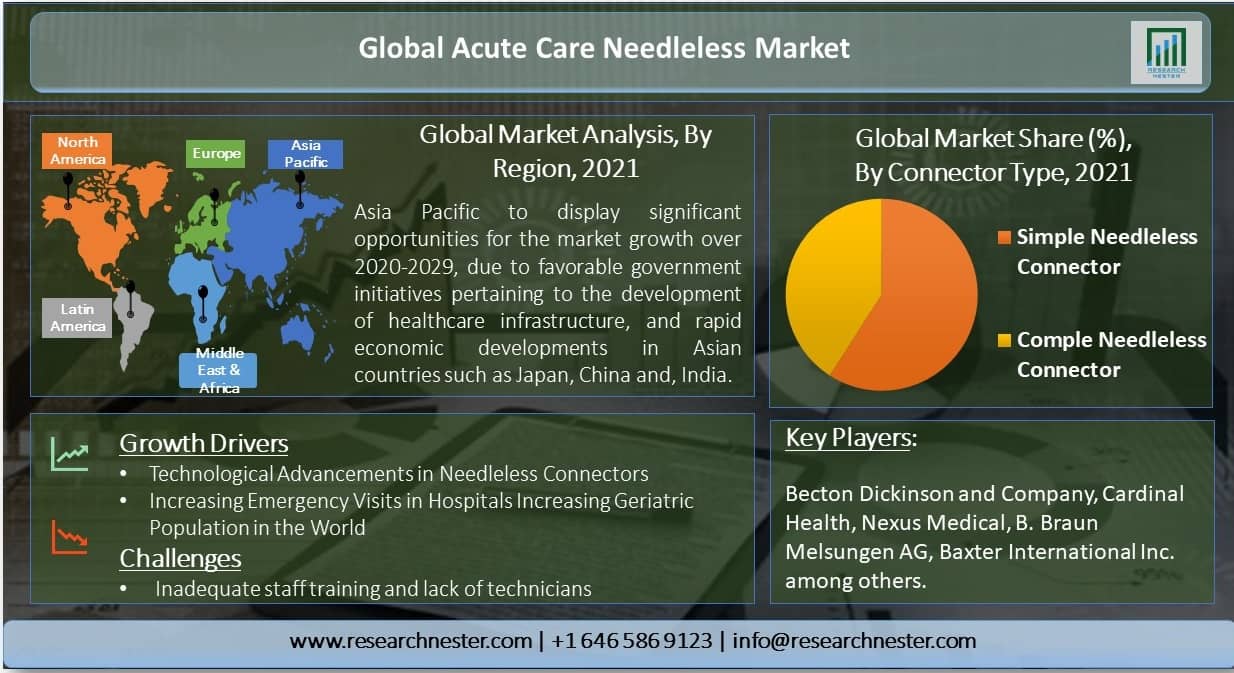 Based on the end-user industry, the global acute care needleless connector market's hospital segment is projected to grow with a significant CAGR over the forecast period. The segment's growth can be attributed to the fact that due to the increasing number of emergency visits in hospitals, the demand for these connectors has increased overall. CLICK TO DOWNLOAD SAMPLE REPORT

Geographically, the market is segmented into North America, Latin America, Europe, Asia Pacific, and the Middle East & Africa region. The Asia Pacific is expected to grow at a lucrative rate over the forecast period due to the increasing prevalence of chronic diseases, favorable government initiatives on the development of healthcare infrastructure, and rapid economic consequences in Asian countries such as Japan, China India. Furthermore, in 2021, North America has emerged as one of the highest revenue-generating regions due to rising awareness levels among healthcare practitioners pertaining to the advantages of needleless connectors, improved healthcare infrastructure, and rapid growth in the geriatric population. According to the Centers for Disease Control and Prevention (CDC), the number of emergency department visits resulting in hospital admission was 16.2 million in 2016. Hence, with the increasing number of emergency department visits, the acute care needleless connectors market growth in the United States is expected to increase. 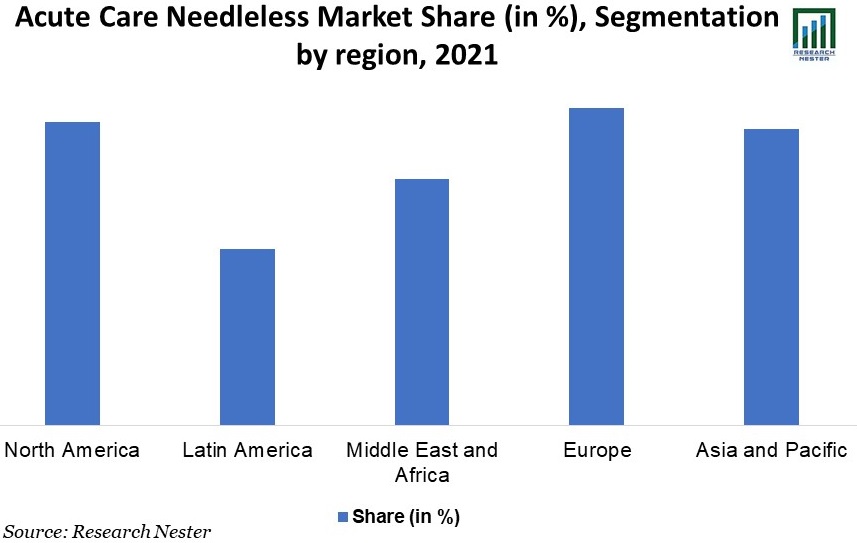 The global acute care needleless connector market is further classified on the basis of region as follows:

What are the major factors driving the growth of the Acute Care Needleless Connector market?

What would be the CAGR of Acute Care Needleless Connector market over the forecast period?

What are the challenges affecting the Acute Care Needleless Connector market growth?

Inadequate staff training and lack of technicians are estimated to hamper market growth.

The market in Asia Pacific region will provide growth due to favourable government initiatives pertaining to the development of healthcare infrastructure, and rapid economic developments in Asian countries such as Japan, China, and India.

Who are the major players dominating the Acute Care Needleless Connector market?

What are the segments in the acute care needleless connector market?

The market is segmented by mechanism type, connector type end-use industry and region.

Which segment under the application segment captures the largest market size in the acute care needleless connector market ?

With respect to application, the speciality hospitals segment is anticipated to hold the largest market share owing to the increasing number of emergency visits to the hospitals.