Base Stations are fixed-point infrastructures required for wireless communication and computer networking across various end-use applications including telecom companies, cloud & data centers, and memory & storage and security companies. The growing demand for high-speed data with low latency and rapidly increasing use of services and applications that are data-heavy has bolstered the demand for 5G networks, further boosting the demand for 5G base stations by telecom operators. In 2019, the global 5G base station market accounted for USD 6,204 Million and is estimated to garner USD 179,490.50 Million by 2028 by growing at a CAGR of 33.70% during the forecast period, i.e., 2020-2028.

The 5G base station market in Asia Pacific held the highest share in 2019 and is estimated to hold this position throughout the forecast period. On the back of rising investments for the 5G enabled smart devices and base stations, supporting 5G new radio (NR) frequencies, the market in the region is estimated to touch USD 146,913 Million in the year 2028. The second highest revenue is anticipated to be attained by the 5G base station market in Europe. In 2020, the market in Europe is projected to cross USD 1,760 Million. The growth of the market in Europe can be attributed to growing investments and developments related to the expansion of 5G spectrum roadmap, further providing better connectivity, network coverage, and experience to the end-users. 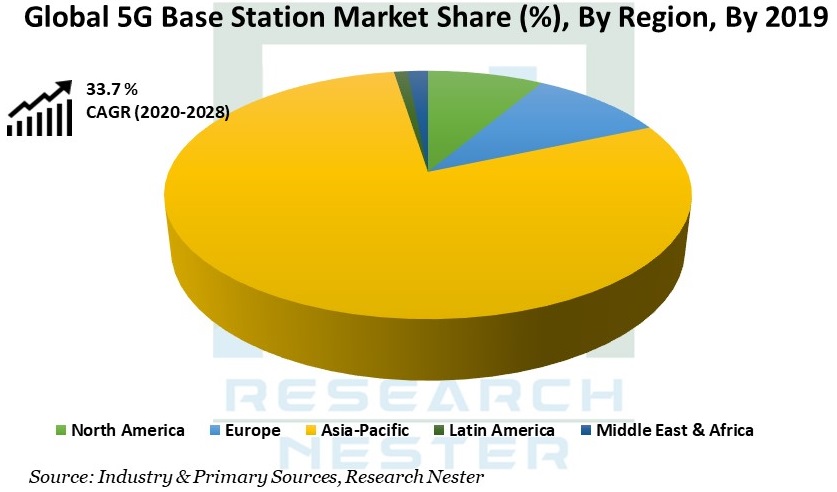 The market is segmented by component into remote radio unit (RRU), small cells, macro cells, baseband processing unit (BPU), MIMO and fiber optic cables among other components. On the back of various notable features such as cost effectiveness, easy installation, enhanced capacity and performance, the small cells segment is projected to be fastest growing segment that is estimated to grow by a CAGR of around 35% during the forecast period, whereas, MIMO is anticipated to be the highest revenue generating segment throughout the forecast period. CLICK TO DOWNLOAD SAMPLE REPORT 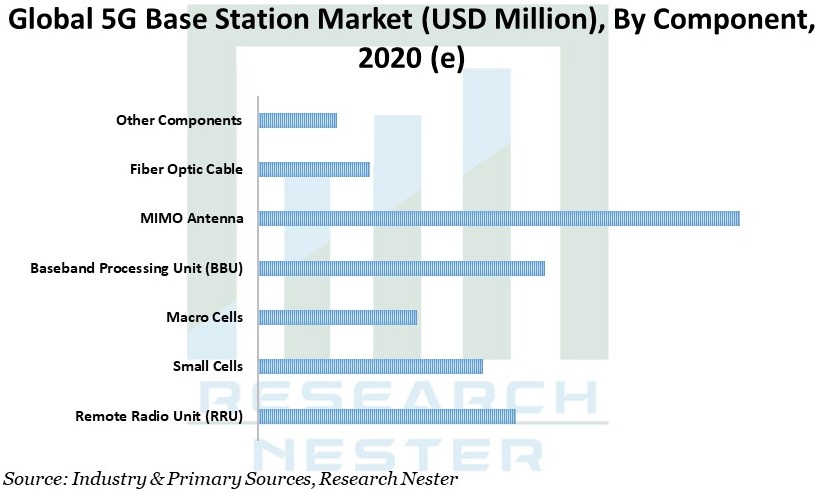 The market is bifurcated by core network technology into software defined network (SDN) and network function virtualization (NFV), out of which, the NFV is the highest revenue generating segment. NFV plays a major role as an integral part of the 5G infrastructure and the technology is used in the 5G wireless networks as it provides cost-efficient and energy-saving solutions.

The global 5G base station market is segmented by area into rural and urban, out of which, the urban area segment accounted for more than 90% of the market share in 2019. This growth can be attributed to rising rate of urban population and digitalization which is further driving the demand for connected and smart devices with high speed internet connectivity and minimal latency. 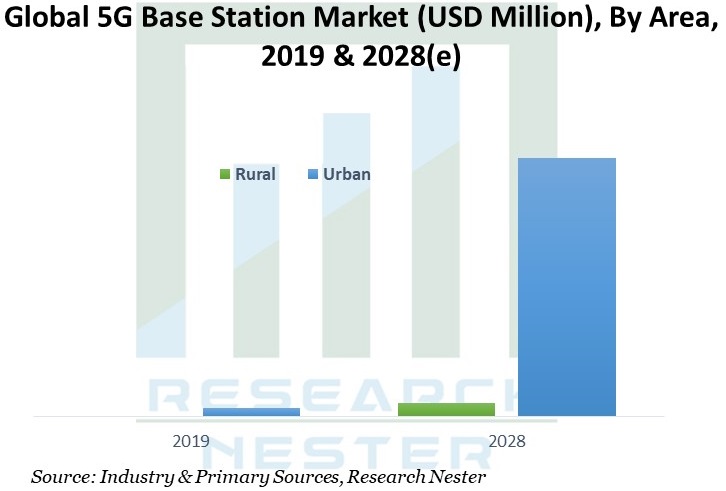 By 5G Base Station Type

The global 5G base station market is segmented by frequency band into less than 2.5 GHz, 2.5 – 8 GHz, 8 – 25 GHz, more than 25 GHz. Among these segments, more than 25 GHz segment held the highest market share in 2019, followed by 8GHz – 25GHz segment in the same year. For long-term steady network connectivity, more spectrum is required to provide a stable 5G quality service, thereby driving the demand for 8GHZ to 25GHZ frequency band.

The 5G networks are expected to be 20 times faster than the 4G networks providing higher bandwidth with high data speed and negligible latency which has further resulted in high penetration and adoption of 5G technology among consumers. Moreover, increasing demand for higher bandwidth among consumers and businesses for various applications such as entertainment, virtual meetings, IoT, and cloud-based services among other applications is estimated to boost the growth of the 5G base station market globally.

The rising trend in usage of interconnected devices, increasing usage of consumer electronics and rise in per capita data consumption is leading to major network advancements. A viable option to fulfil such requirements is the adoption of 5G technology. With rising per capita income and disposable income, consumers are ready to invest in advanced services like 5G technology. These factors are projected to drive the market growth.

The power consumption by a typical 5G base station is almost over twice that of the 4G networks. Moreover, high investment along with strict regulatory policies pertaining to the deployment of 5G base stations are some of the major factors that might act as barriers to the growth of the market during the forecast period.

Some of the prominent industry leaders in the global 5G base station market are Huawei Technologies Co., Ltd., ZTE Corporation, Telefonaktiebolaget LM Ericsson, Nokia Corporation, Samsung, NEC Corporation, Alpha Networks Inc., Airspan Networks, CommScope, Motorola Solutions, Inc. and others. Despite the challenges faced by various businesses and countries due to COVID-19, more than 65% of the players are estimated to invest in 5G over the duration of next 5 years.

What are the major factors driving the growth of the 5G base station market?

Rising number of internet-connected devices and increasing demand for high-speed internet connectivity with low latency are some of the major factors driving the market growth.

What would be the CAGR of 5G base station market over the forecast period?

Who are the major players dominating the 5G base station market?

What are the major segments in the 5G base station market?

What can be the significant growth indicators for the urban area segment in the 5G base station market?

Rising rate of urban population and digitalization are estimated to be significant growth indicators for urban area segment growth.

Stringent authoritative regulations related to the deployment of base stations are estimated to act as barriers to the growth of the market.