The second largest region to hold the highest market share in 2016 was Europe, owing to increasing demand for virtual reality game consoles in the region. Along with that, the high adoption rate of VR contents in gaming market is escalating the expansion of Europe 360-degree camera market with a significant CAGR of 34.5% during the period 2017-2024.CLICK TO DOWNLOAD FREE SAMPLE REPORT 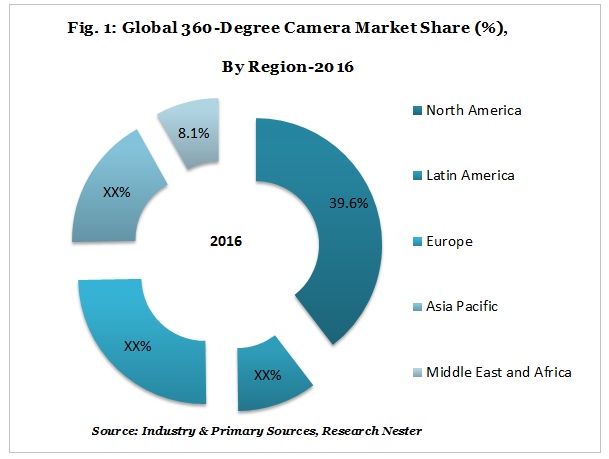 Further, the growing GDP of emerging economies such as India, China, Japan, and Singapore along with increased penetration of VR headsets and high demand for 360 degree-cameras in media and entertainment industry are likely to fuel the growth of the Asia Pacific region at highest pace in overall 360-degree camera market with a CAGR of 36.9% over the forecast period. Furthermore, Brazil and Rest of Latin America are the largest revenue generating countries in Latin America, whereas rising disposable income and increasing demand for VR video entertainment is predicted to trigger the growth of the GCC 360-degree camera market in Middle East and Africa.

The global 360-degree camera market has been segmented by application into residential, commercial, industrial, healthcare, defense, media & entertainment and others. Among these segments, the media & entertainment segment held the highest market share of around 22.5% in 2016 and is expected to be the most lucrative segment in upcoming years by expanding at the highest CAGR of 37.2% over the forecast period. Further, the defense segment is anticipated to account for second largest market share by the end of 2024. 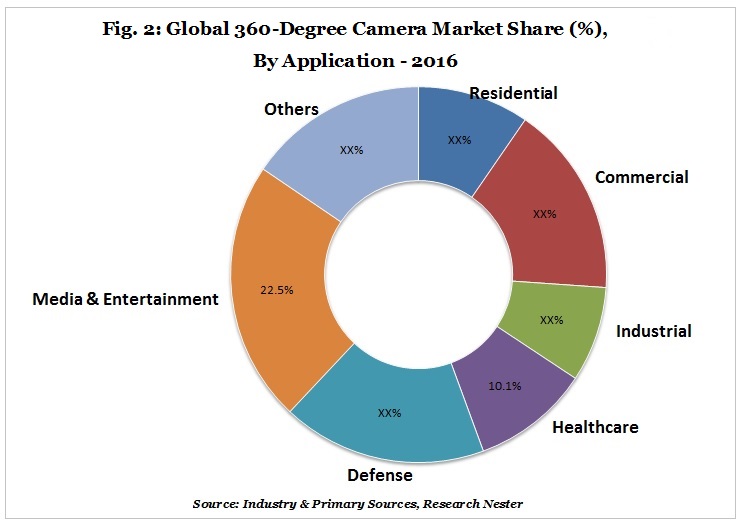 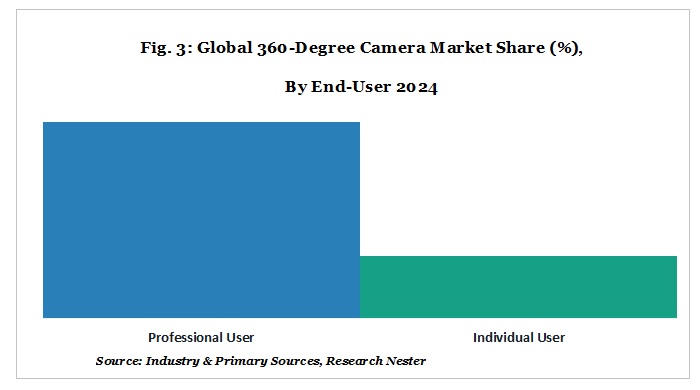 The global 360-degree camera market is divided by connectivity into bluetooth, Wi-Fi and others, out of which, the Wi-Fi segment is anticipated to dominate the market by observing a growth rate of 8.2x over the forecast period.

The global 360-degree camera market is segmented by price range into premium price, mid-price and low price. Among these segments, the premium segment accounted for largest market valuation of USD 766.5 Million in 2016, whereas the mid-price segment is predicted to reach highest market valuation as compared to other segments by 2024 by expanding at a highest CAGR of around 35.0% over the forecast period. 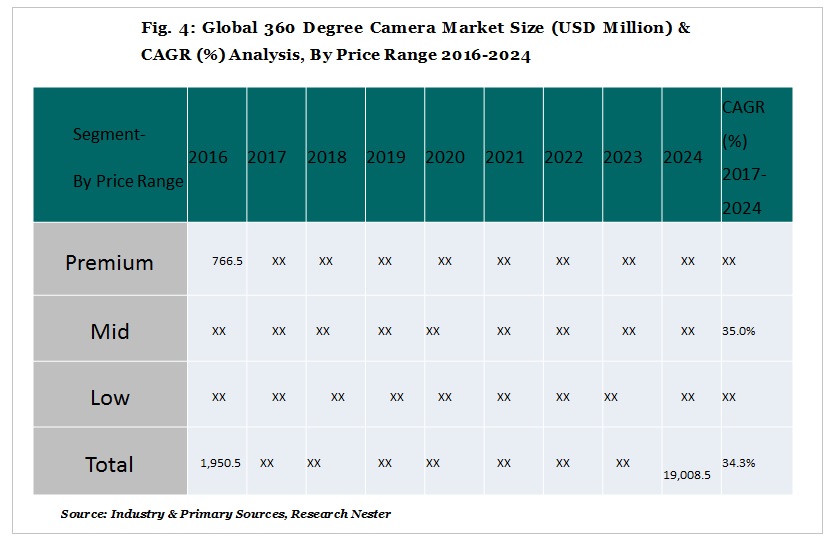 The global 360-degree camera market is thriving on the back of increasing popularity of virtual reality videos, technological advancements in 360 degree cameras and rising adoption in media & entertainment industry among its wide range of applications. Further, the tourism industry in developed countries is using virtual reality videos to gain attention of maximum tourists. For instance, Australia became the first tourism board in Hong Kong who are using virtual reality to inspire travellers. Additionally, the growing admiration of virtual tour amongst the population is also believed to aid the 360-degree cameras market to grow in near future.

There is a lack of awareness related to 360-degree cameras among people which is one of the major factors behind their low adoption rate. Additionally, the limitations of hardware and software and lack of proper compatibility with other devices combined with high cost associated with 360-degree camera are likely to hinder the growth of the global 360-degree camera market over the next few years.

SAMSUNG Electronics Co., Ltd., a global leader in manufacturing of high tech electronics and digital media is concentrating on expanding company's product portfolio by offering new products in consumer electronics market. Further, the company is focusing to reinforce competitiveness, services and business to business along with expanding their products by creating best in class consumer experience based on innovation and operation excellence. Furthermore, the company is introducing new technologies and focusing on continuous high R&D investments

Moreover, other key and niche players are working towards the expansion of product portfolio along with investing in high quality R&D to develop highly engineered and innovative technologies in order to gain competitive edge in the global 360-degree camera market.