Global wireless Bluetooth headset market is anticipated to witness a robust growth over the forecast period i.e. 2017-2024. Technological advancement with multimedia accessories and rising adoption of smart phones, computers and media streaming devices are some major factors which are anticipated to foster the growth of global wireless Bluetooth headset market over the forecast period. 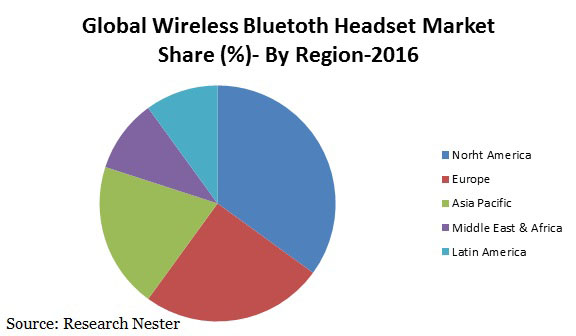 Asia Pacific region is expected to be the fastest growing region of wireless Bluetooth headset market. This growth of Asia Pacific region can be attributed to the increasing number of smartphone users and high adoption of innovative technologies in this region.CLICK TO DOWNLOAD FREE SAMPLE

Apart From this, Europe region is expected to witness a satisfactory growth over the forecast period due to the increasing consumer’s disposable income and rising adoption of music streaming devices.

Global wireless Bluetooth headset market is further classified on the basis of region as follows: