The global white cement market is estimated to garner a sizeable revenue and grow at a CAGR of ~4% over the forecast period, i.e., 2022 – 2030. The growth of the market can be attributed to the increasing number of infrastructural activities across the world, and rising demand for aesthetics in the construction industry. Along with these, growing requirements for spaces from healthcare and educational sectors has led to the surge in construction of these buildings, which is expected to drive market growth in the upcoming years. Furthermore, technological advancements in mixtures and surface treatments of white cement creating new applications for white cement, is also projected to offer lucrative opportunities to the market in the near future. In addition, rapid population growth and changing lifestyles are predicted to lead the expansion of the market. According to the World Bank, the total population of the world in 2020 was 7.753 billion, up from 7.673 billion in the previous year. The world population has only witnessed a hike since 1960. 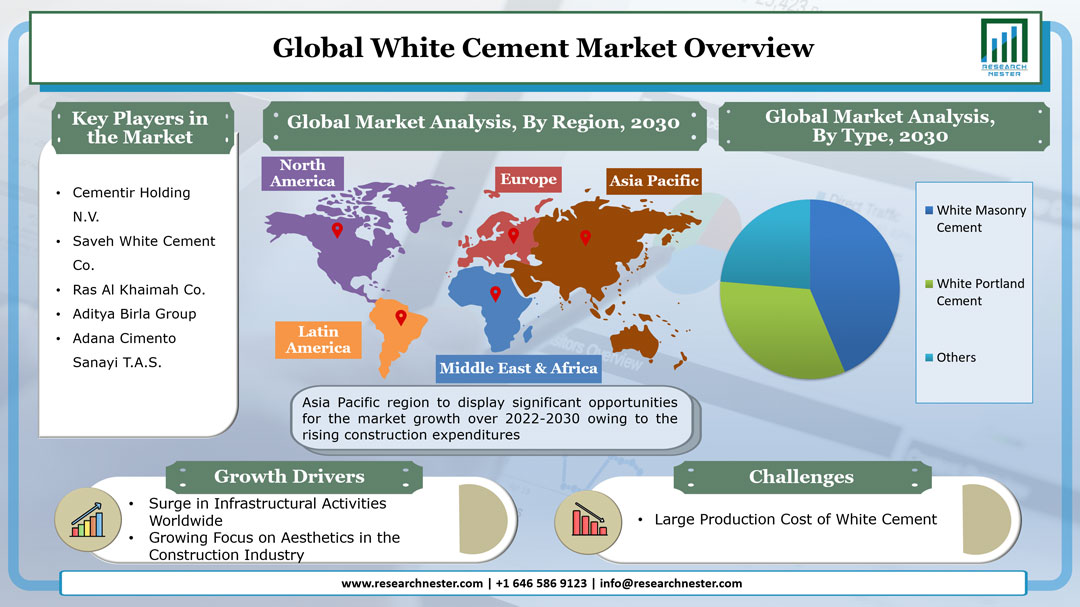 The market is segmented by application into residential, commercial, infrastructure, industrial, and institutional, out of which, the infrastructure segment is anticipated to hold the largest share in the global white cement market. This can be accounted to the growing usage of white cement for swimming pools and for covering facades and increasing investment in infrastructural development worldwide. Apart from these, white cement is popularly used with pigments for imparting attractive colors and shades to mortars and concrete. This is also assessed to boost the growth of the market segment in the coming years. Additionally, on the basis of type, the segment for white Portland cement is evaluated to grab the largest share over the forecast period owing to its ability to ensure clean, bright and consistent colors, including pastel colors.

On the basis of geographical analysis, the global white cement market is segmented into five major regions including North America, Europe, Asia Pacific, Latin America and the Middle East & Africa region. The market in the Asia Pacific is estimated to witness noteworthy growth over the forecast period on the back of the surge in construction and building expenditures, and growing demand for white cement in commercial projects in India and China. In the financial year 2017, around 9 percent of India’s total GDP share was spent in the construction sector, up from approximately 8.5 percent from the previous year. The increase in urban population is also projected to drive the region’s market growth in the future. Moreover, the market in Europe is anticipated to occupy a significant market share during the forecast period, which can be credited to the increase in renovation and remolding activities, and shift in construction trend from steel and glass to cement.

The global white cement market is further classified on the basis of region as follows:

Our in-depth analysis of the global white cement market includes the following segments:

What are the major factors driving the growth of the white cement market?

The major factors driving market growth are increasing number of infrastructural activities across the world and rising demand for aesthetics in the construction industry.

What would be the CAGR of white cement market over the forecast period?

What are the challenges affecting the white cement market growth?

High production cost of white cement is estimated to hamper the market growth.

Which region will provide more business opportunities for growth of white cement market in future?

Asia Pacific will provide more business opportunities for market growth owing to the surge in construction and building expenditures, and growing demand for white cement in commercial projects.

Who are the major players dominating the white cement market?

What are the segments in the white cement market?

Which segment captures the largest market size in the application segment in the white cement market?

The infrastructure segment is anticipated to hold largest market size and is estimated to grow at a notable CAGR over the forecast period and display significant growth opportunities.