The global wearable injectors market is estimated to grow with a moderate CAGR during the forecast period, i.e., 2022-2030. The growing prevalence of chronic medical conditions and increasing geriatric population, along with the technological developments in drug delivery injectors globally, are expected to fuel the progress of this market in the near future. According to the data collected from Organization for Economic Co-operation & Development (OECD), in 2019, about 33% of the total population of OECD countries aged 15 years and more had two or more chronic conditions, and the number increased to 58% in persons with age more than 65 years. Moreover, the ability of wearable injectors to administer new formulations with higher volume and viscosity can significantly improve the patient experience, which in turn is expected to boost market growth in the coming years. The growth of the market can also be attributed to factors such as the continuous expansion in research for the development of biologics and favorable reimbursement policies for wearable injectors in prominent economic regions. 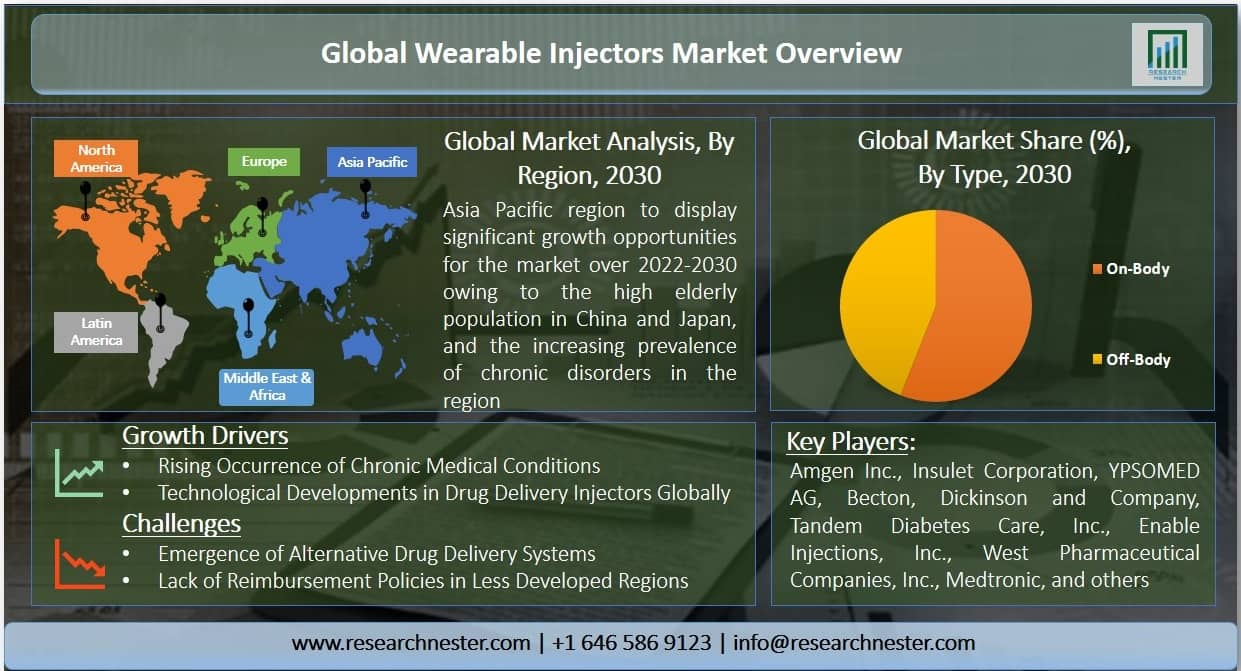 The market is segmented on the basis of type into on-body and off-body, out of which the on-body segment is anticipated to grab the largest share by the end of 2030 on account of the increasing demand for this type of injector owing to the presence of multiple features. In addition, on-body wearable injectors are comfortable to be worn on the skin, along with their water-resistant capability and ease of use at home, which is also projected to contribute to the growth of the segment during the forecast period. Additionally, the off-body injector segment is also expected to grow significantly in the years to come as these devices reduce the problems such as adhesive fitting issues, painful removal and skin sensitivity.

Based on end-user, the home care settings segment in the global wearable injectors market is projected to grow with a significant CAGR over the forecast period, which can be attributed to the surge in preference for self-administration of drugs and the rise in the development of advanced drug delivery options, which minimize the need for technical expertise while administering medications. Additionally, the restrictions posed by COVID-19 outbreak has also resulted in the rising adoption of self-administration of drugs in-home care settings, especially by the vulnerable groups such as the geriatric population, which is also expected to support the market growth.

Geographically, the global wearable injectors market is segmented into North America, Latin America, Europe, Asia Pacific, and the Middle East & Africa region. The market in the Asia Pacific is predicted to grow at the highest CAGR over the forecast period owing to the large elderly population in many countries of the region such as China and Japan, and the increasing prevalence of chronic disorders in the region. Furthermore, the market in North America is evaluated to occupy the largest share in terms of revenue over the forecast period, ascribing to the strong presence of leading market players in the region. Along with this, North America also leads in terms of presence of strong healthcare infrastructure, which is also expected to contribute to the market growth in the region. Alternatively, the market in Europe is also anticipated to occupy a significant share in the market on account of its success in drug trials, rising cases of cancer and the increasing ageing population in the region. As per the Annals of Oncology of the European Society for Medical Oncology, the predictions for cancer-related deaths in the European Union for 2021 are 1,267,000 deaths 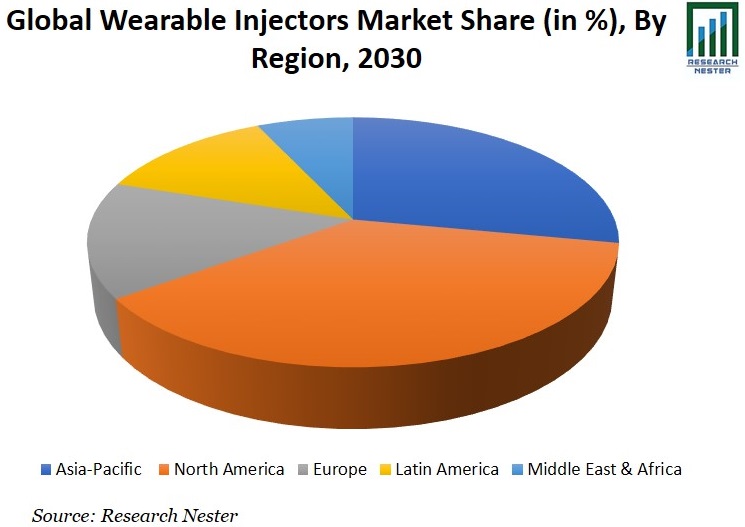 The global wearable injectors market is further classified on the basis of region as follows:

Our in-depth analysis of the global wearable injectors market includes the following segments:

What are the major factors driving the growth of the wearable injectors market?

The rising prevalence of chronic medical conditions and the technological developments in drug delivery injectors globally are the key factors driving market growth.

What would be the CAGR of wearable injectors market over the forecast period?

What are the challenges affecting the wearable injectors market growth?

The emergence of alternative drug delivery systems and the lack of reimbursement policies in low and middle-income regions are estimated to hamper market growth.

Which region will provide more business opportunities for growth of wearable injectors market in future?

The market in Asia Pacific will provide ample growth opportunities owing to the high elderly population in many countries of the region and the increasing prevalence of chronic disorders.

Who are the major players dominating the wearable injectors market?

What are the segments in the wearable injectors market?

Which segment under the end-user segment captures the largest market size in the wearable injectors market?

With respect to end-user, the home care settings segment is anticipated to hold the largest market share owing to the surge in preference for self-administration of drugs.