The global wearable cardioverter defibrillator market is segmented based on region into North America, Europe, Asia Pacific, Latin America and Middle East & Africa. The North America wearable cardioverter defibrillator market had a market share of 47.28% in the year 2019 and is expected to hold the largest market share by the end of 2028. The growth in this region can be attributed to the increase in investment towards the medical device sector from government and private entities to maintain the highest quality of services. The Asia Pacific region captured a market size of USD   36,793.76 thousand in the year 2019 and is expected to reach USD 223,072.54 thousand by 2028, by a CAGR of 27.14% during the forecast period owing to the rising availability of advanced infrastructure for research along with rising investment to address the growing demand for advanced treatment solutions in this region. 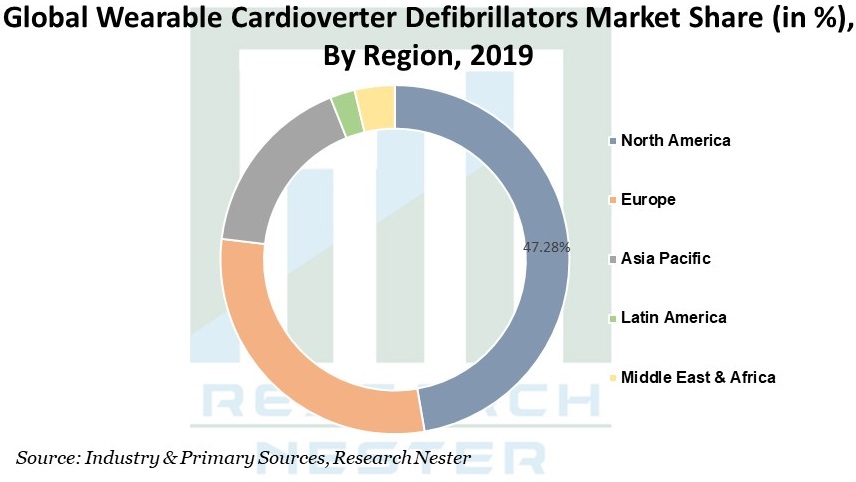 Based on indication, the global wearable cardioverter defibrillators market is segmented into myocardial infarction, congenital heart disease, ventricular arrhythmias, peripartum cardiomyopathy, tetralogy of Fallot, Wolff-Parkinson-White (WPW) syndrome, and others. Amongst these, ventricular arrhythmias segment is the most commonly occurring heart disorder that results in abnormal heartbeats, and also sometimes lead to cardiac arrest. The segment had accounted for 39.11% of the market share in 2019. Ventricular arrhythmia is unusual in children, but it may occur in patients with associated congenital heart diseases.

The market is segmented by demography into pediatric, adults, and geriatric. The adult population in the world has increased rapidly over the past few years. People with high risk of cardiovascular diseases usually include adults with hypertension, diabetes, obesity, and other diseases. The adults’ segment is estimated to touch USD 152,758.51 thousand by the end of 2020. It is projected to be the fastest growing segment and held the largest market share of 78.42% in 2019. 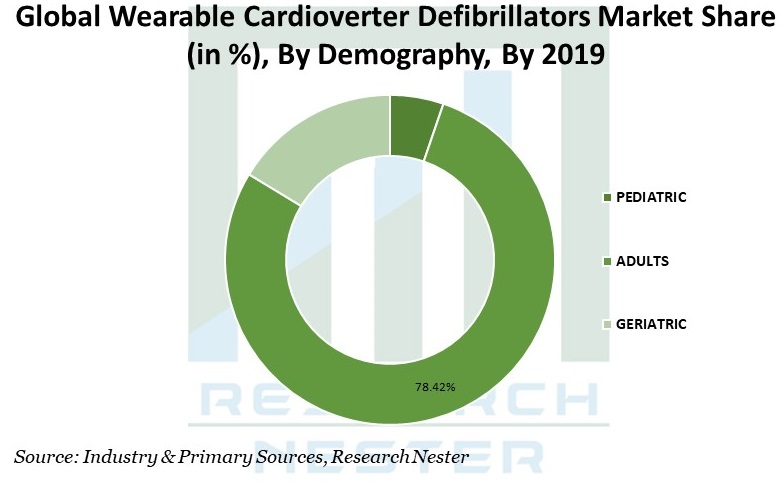 The market is segmented by end user into home care settings, hospitals, cardiology clinics, and ambulatory surgical center. Home care setting segment accounted for the largest market share in 2019. It is the preferred way of treating patients to preserve their independence and remain in the comfort of their surroundings. Moreover, more people nowadays are focusing more on spending on resources for proper care at home. Furthermore, with the advancement in medical technology, the physicians can now assist their patients virtually, which has further led to the increasing acceptance of home care settings. Hospitals segment has accounted for a significant market share in the past years and is anticipated to play a key role in the growth of the market on account of increasing number of hospitals providing numerous options for treatment across developing countries.

High risks of cardiovascular diseases are attributed to behavioral factors including tobacco, alcohol, and unhealthy diet consumption. According to the World Health Organization, the global CVD death burden is estimated to have risen to 17.9 million in 2016, out of which, 85% of the deaths were due to heart attacks and strokes. Additionally, raised blood pressure, overweight, and obesity also increase the risk of heart attack and other CVD diseases. Moreover, the old age population has also increased the incidence rate of cardiovascular disorders and an increase in exposure to CVD risk factors linked to social and economic development. Countries have different CVD causes, such as, Argentina has the highest number of patients with Hypertension, India and China have an increased number of people smoking tobacco, Australia has about 1/4th of the population with hypertension, around 1/3rd of women population in Mexico are obese, and overweight children in the US and Russia account high in alcohol consumption. The increasing incidences of CVDs is therefore anticipated to drive the growth of the global wearable cardioverter defibrillators market.

The increasing investment in various international healthcare programs funded by the government and other organizations such as the World Health Organization is one of the major factors accelerating the market growth. Healthcare spending is increasing owing to several factors such as an aging population, changes in disease prevalence or incidence rate, and increase in the cost of services. Moreover, the increasing investment in the research and development sector is also expected to promote market growth in the forecast period. Additionally, the rapidly growing incidences of cardiovascular diseases has encouraged a significant number of manufacturers to develop new technologies in order to provide advanced screening and treatment methods.

Since there is a disruption of supply chain across the globe owing to Covid-19, the manufacturer ZOLL Medical Corporation is witnessing a severe shortage of raw material components which are required to meet the production needs. Many of the countries that were previously dependent on imports from China & US for medical products had to reevaluate their priorities to meet the drastically changed market scenario, particularly with rising geo-political tensions disrupting various micro-markets.

1) What are the major factors driving the growth of the wearable cardioverter defibrillator market?

Ans: Growing incidence of cardiovascular diseases, increasing healthcare expenditure, and technological advancements in the field of healthcare are some of the major factors driving the market growth.

2) What would be the CAGR of wearable cardioverter defibrillator market over the forecast period?

5) Who are the major players dominating the wearable cardioverter defibrillator market?

7) What are the major segments in the wearable cardioverter defibrillators market?

Ans: Stringent government regulations, lack of skilled professionals and limited awareness among people are estimated to act as barriers to the growth of the market.