The weapon mount market is anticipated to record a significant CAGR during the forecast period, i.e., 2021 – 2029, on the back of increasing procurement programs for armored vehicles, naval ships, and aircrafts, and rising demand for remote weapon stations for military applications by several countries around the globe. Along with these, growing need of mounts in navy, escalating use of unmanned vehicles in the war zone, increase in military investments and surging security measures worldwide are also expected to fuel market growth in the coming years. It was calculated the global military expenditure reached a value of approximately USD 2 billion by the end of 2019. Furthermore, intensifying innovations by key market players is estimated to offer lucrative opportunities to the market over the forecast period.

The market is segmented by mount types into static, turret, coaxial, fixed pintle/pedestal, RWS, swing arm, monopods, bipods, and tripods, out of which the static segment is evaluated to hold the largest share during the forecast period. This can be credited to the increment in number of platforms where static mount can be placed and the rising modernization of naval fleet. Apart from these, growing demand for static mounts on ground operations and vehicles is also assessed to drive growth of this segment in the future. Furthermore, the man operated segment of the mode of operations segment is projected to constitute for a larger share in the market on account of an increase in demand of armories such as machine guns, sniper rifles, and automatic rifles by the military globally. 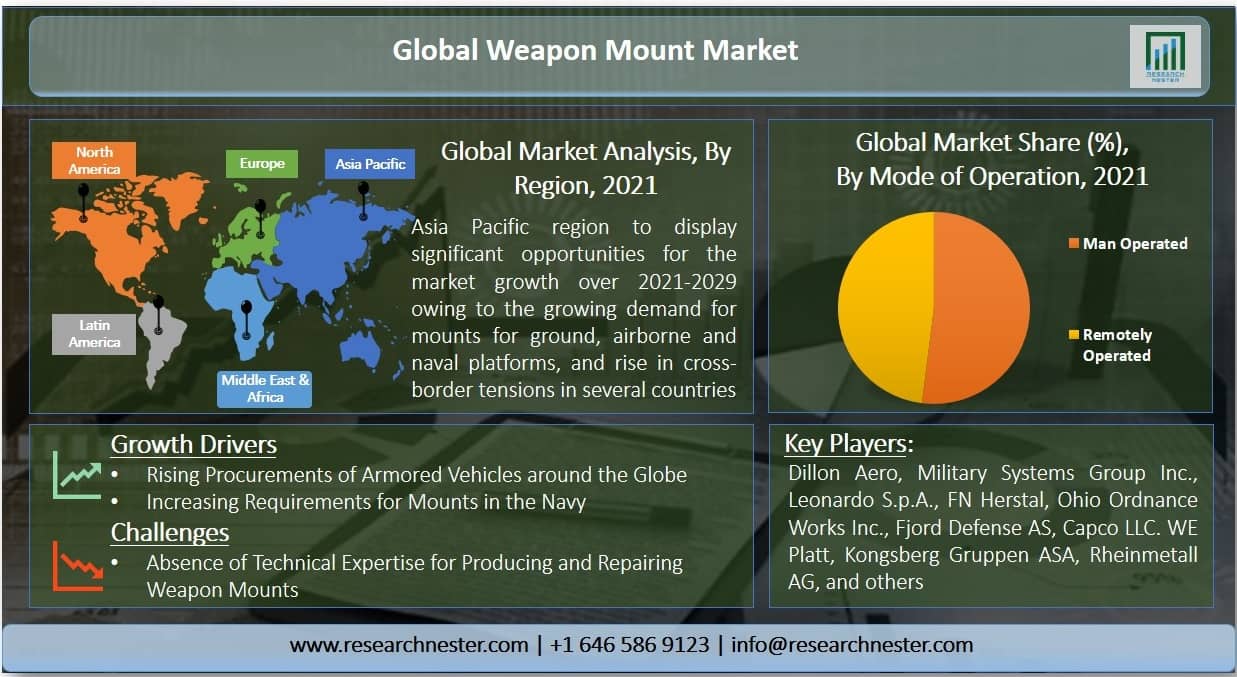 On the basis of geographical analysis, the weapon mount market is segmented into five major regions, including North America, Europe, Asia Pacific, Latin America, and the Middle East & Africa. Asia-Pacific is estimated to occupy the largest share in the market during the forecast period owing to the augmented demand for weapon mounts for ground, airborne and naval platforms. In addition to this, different border disputes between countries such as China, India, Pakistan, Afghanistan, North Korea, and South Korea, among others, are driving these countries to increase their investment in defense technology, which includes the procurement of armored vehicles, combat aircraft, naval ships, and weapons for soldiers which supports the development of the market in the near future. Moreover, Europe is also estimated to garner significant market share during the forecast period, which can be attributed to the increasing defense investments in countries such as Germany, Russia and France. For instance, Russia allocated more than $65 billion for military spending in the year 2019. CLICK TO DOWNLOAD SAMPLE REPORT 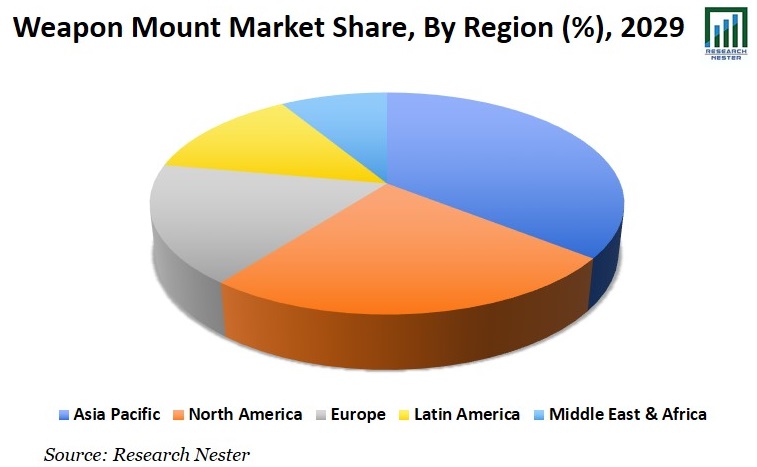 The weapon mount market is further classified on the basis of region as follows:

Our in-depth analysis of the weapon mount market includes the following segments:

By Mode of Operation

What are the major factors driving the growth of the weapon mount market?

Increased procurement of armored vehicles globally and growing demand for mounts in the navy are estimated to drive market growth.

What would be the CAGR of weapon mount market over the forecast period?

What are the challenges affecting the weapon mount market growth?

Lack of technical expertise required for manufacture and repairing mounts is estimated to hamper the market growth.

Which region will provide more business opportunities for growth of weapon mount market in future?

Who are the major players dominating the weapon mount market?

What are the segments in the weapon mount market?

The market is segmented by mount type, platform and mode of operation.

Which segment captures the largest market size in the mount type segment in the weapon mount market?

The static segment is anticipated to hold largest market size in value and is estimated to grow at a notable CAGR over the forecast period and display significant growth opportunities.