· July 2019: Fetch Robotics, Inc., a company engaged in the manufacture and development of collaborative, autonomous mobile robot solutions for warehousing and logistical markets raised a sum of USD 46 million through Series C funding. The funding is expected to help Fetch Robotics to expand its operations in the U.S.A. The funds is also expected to be used for increasing the production for meeting consumer demand and for research and development purposes.

· September 2018: GreyOrange, a global technology company in AI powered robots had completed another round of funding by raising USD 140 million by Series C funding as part of its efforts to develop flexible and scalable solutions for end to end automation across the supply chain starting from factories to fulfilment centres and beyond.

A robot is a machine that contains parts that can allow it to move and perform the tasks by making its own basic decisions. New technological advancements such as Artificial Intelligence (AI) and the Internet of Things (IoT) have found their way into warehouses and are trying to address the more pressing challenges faced in the global market by warehouses such as rising wages, lack of sufficient labour and many more. Warehousing is an important part of supply chain that has been evolving due to automation. Warehouses are having the option to select robotic solutions that can help with various processes. Warehouse automation technologies are becoming sophisticated and are focusing on fulfillment of orders, material handling, supply chain logistics and distribution for industry.

The growth of the global warehouse robotics market is driven by factors such as increasing expenditure on research and development, advancement in technology that have made robots smaller and better, the rise in demand for automation globally due to shortage of labour in some places and increasing levels of competition in e-commerce and many more. According to a study released by American Trucking Associations (ATA), 90 percent of for-hire truck-load carriers reported that they could not find enough drivers capable of meeting the requirements of Department of Transportation.

The global warehouse robotics market is anticipated to register a robust CAGR over the forecast period i.e. 2020-2027. The market is segmented by product, function and by end user, out of which, the mobile robots forming part of product type segment is anticipated to occupy the highest market share, on account of their use in transportation, inspection and other tasks. Mobile robots also find their application in healthcare where they assist doctors and surgeons during surgeries. According to World Robotics report released by International Federation of Robotics (IFR), the annual global sales of robots was valued at USD 16.5 billion in 2018. CLICK TO DOWNLOAD SAMPLE REPORT

The governments across the globe have been encouraging innovation in technologies, so that it would play a major role in improving the innovation capacity in a nation. The governments are being ranked across the globe according to their ease of doing business. As per a World Bank Report published on doing business in 2019, United States of America, United Kingdom and Japan are ahead and are ranked among the top fifty nations in terms of ease of doing business. The Asia Pacific region saw India considerably improve its ease of doing business ranking while being measured under various areas of doing business. This is anticipated to encourage more number of startups to adopt warehouse robots into their operations, in order to improve the efficiency and save on costs. Ever since the adoption of AI, almost every work can be modified at a warehouse by automation. AI helps in predicting demand for the product by helping in organizing the commodities to be shipped to warehouses at reduced costs, thus helping to save transport costs.

Moreover, Robot as a Service (RaaS) model has been introduced as compared to adoption of robots which may take several years to obtain returns on their capital investments. This is seen as a cost effective, scalable, flexible and less risky approach for companies in terms of costs and would encourage higher use of warehouse robots, as it does not require any additional infrastructure. Additionally, these robots can have 24x7 operations which would help improve the productivity and revenues. These factors are anticipated to drive the growth of the market over the forecast period.

The number of startups that are established have been slowly increasing with every passing year, with new innovations driving the growth of the markets across the globe. According to Observer Research Foundation (ORF), 14036 startups have been recognized by the Government of India as potential businesses for which financial support is expected to be provided. Currently, 660 startups have also been provided with business support and funding has been granted for 132 enterprises by the government. With India being the fastest growing market for e-commerce sector, the growth of the e-commerce market will have a direct impact on the micro, small and medium industries in terms of obtaining financing, technology and training. Around 27% of Indian MSMEs which are online today are using E-Commerce. The entry of MSME businesses into e-commerce space requires only an investment of US 100 dollars, which has helped to increase the establishment of a large number of E-commerce startups. 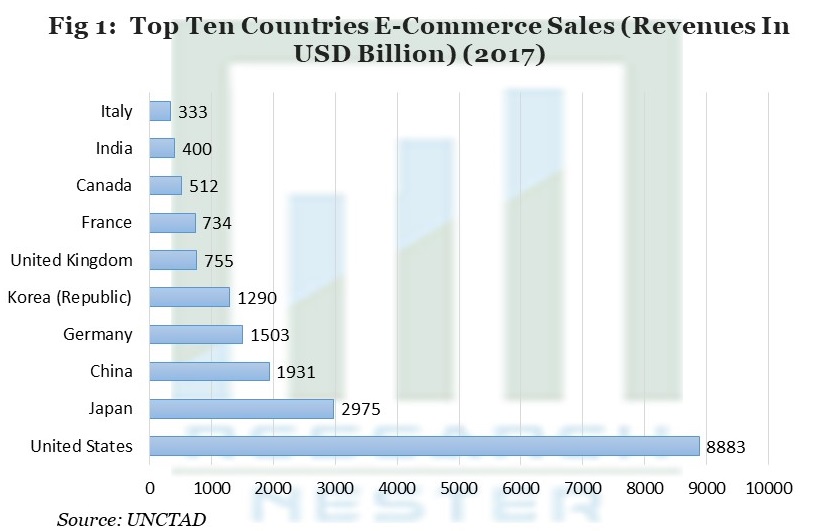 High Product Costs And Reduction In Human Workforce Due To Automation

On the basis of regional analysis, the global warehouse robotics market is segmented into five major regions including North America, Europe, Asia Pacific, Latin America and Middle East & Africa region. The market in North America is anticipated to occupy the highest market share, owing to adoption of robotics for management in warehouses much earlier than many other countries. Moreover, the rapid growth of the e-commerce industry is anticipated to drive the growth of the market over the forecast period.

The global warehouse robotics market is further classified on the basis of region as follows: