·     April, 2021: KR CYBERTECH nano series, a subsidiary of KUKA announced the launch of a new range of automated vehicles with lowest maintenance requirements.

The global warehouse automation market is estimated to grow at a CAGR of ~15% over the forecast period, i.e., 2022 – 2030. The growth of the market can be attributed to the growing adoption of robotics and automation amongst various end-user industries, and constant development in the field of technology. The technological advancement and new breakthroughs in robotics and automation technology is estimated to primarily drive the market growth. With the rise in the population of consumers, manufacturing of consumer goods has also risen tremendously in the past decade. As a result, there is an up-surge in the number of warehouses to stock and supply goods. The growing emergence of warehouses is estimated to boost the market growth. In the year 2018, around 18,200 warehouses functioned worldwide, up from less than 16,000 in 2014. Along with this, over 40,000 new FMCG stores were launched across the world in the same year. Moreover, reduction in labor costs, and increased working speed are some of the major factors estimated to boost the market growth. In addition to this, the growing cases of accidents in industrial workplaces, especially warehouses, is another major aspect, promoting the adoption of automation in warehouses. According to the data by the International Labor Organization (ILO), over 340 million workplace accidents are caused annually, resulting in 2.3 million deaths. Use of automatic robots and machines lowers the risk of accidents, making warehouses safer to work. This is estimated to further encourage the market growth. 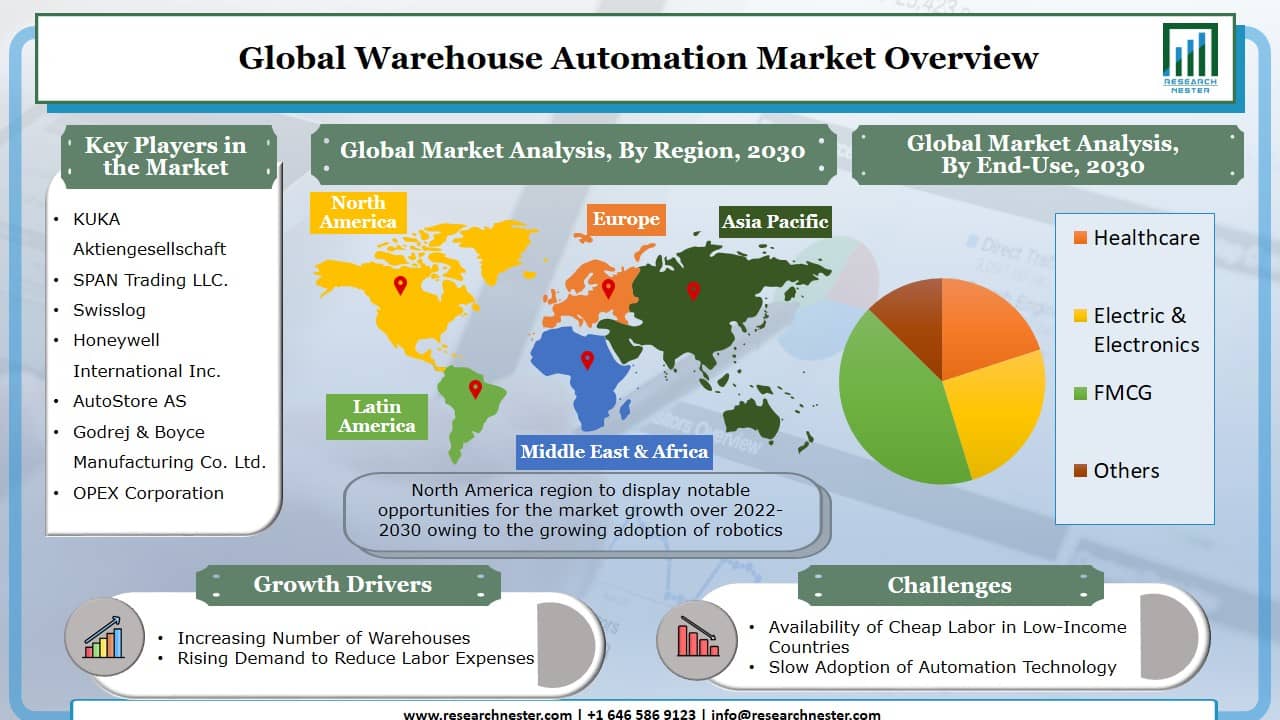 The market is segmented by end-user into healthcare, electric & electronics, fast moving consumer goods, and others, out of which, the fast-moving consumer goods (FMCG) segment is anticipated to hold the notable share in the global warehouse automation market over the forecast period on account of owing to the growing demand for consumer goods, backed by rising number of consumers. Moreover, growth in manufacturing industry is expected to boost the segment growth. CLICK TO DOWNLOAD SAMPLE REPORT

On the basis of geographical analysis, the global warehouse automation market is segmented into five major regions including North America, Europe, Asia Pacific, Latin America and Middle East & Africa region. The market in Asia Pacific region is estimated to witness noteworthy growth over the forecast period on the back of rapid industrial development, coupled with the growing automotive industry and demand for enhanced material handling solutions in the region. Moreover, growing consumer goods manufacturing industry in the countries, such as, India, Japan, Korea, and China, is estimated to boost the market growth. For instance, manufacturing contributes to around 30% of the economy of China.

The market in the North America region is anticipated to gain the largest market share throughout the forecast period owing to the growing adoption of robotics and automatic technology, along with higher labor cost in the region. Moreover, increasing focus on the adoption of industrial internet of things (IIoT) is also expected to create significant growth opportunities for market growth in the region. 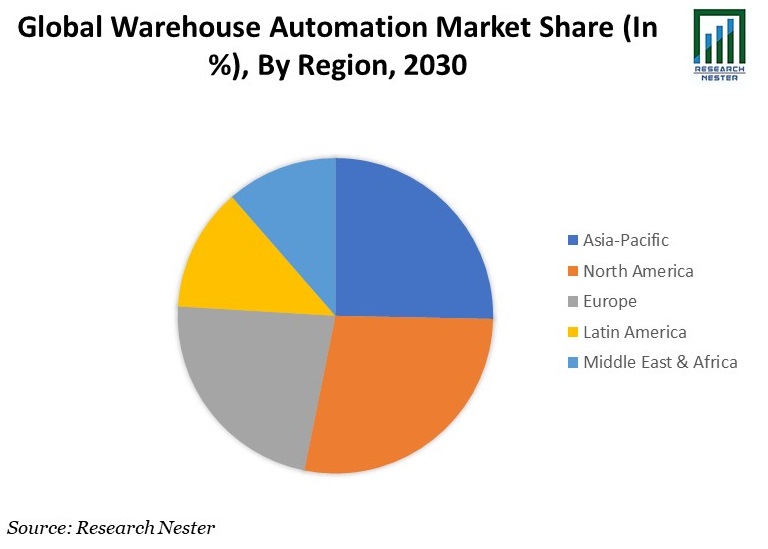 The global warehouse automation market is further classified on the basis of region as follows:

Our in-depth analysis of the global warehouse automation market includes the following segments:

What are the major factors driving the growth of the warehouse automation market?

The growing adoption of automation technology, and increasing number of warehouses to boost the market growth.

What would be the CAGR of warehouse automation market over the forecast period?

What are the challenges affecting the warehouse automation market growth?

Availability of cheap labor in low-income countries and high cost are estimated to hamper the market growth.

Which region will provide more business opportunities for growth of warehouse automation market in future?

The market in the Asia Pacific is expected to provide maximum growth opportunity over the forecast period, owing to the growing manufacturing industry in the region.

Who are the major players dominating the warehouse automation market?

The major players in the market are KUKA Aktiengesellschaft, SPAN Trading LLC., Swisslog, Honeywell International Inc., AutoStore AS, and others.

What are the segments in the warehouse automation market?

The market is segmented by component, application, end-users, and by region.

Which segment captures the largest market size in component segment in the warehouse automation market?

The storage and retrieval system segment is anticipated to hold largest market size over the forecast period and display significant growth opportunities.