The global viral warts treatment market is estimated to garner a sizeable revenue and grow at a CAGR of ~3% over the forecast period, i.e., 2022 – 2030. The growth of the market can be attributed to the growing prevalence of skin disorders across the world, and rapid growth in the number of cases of people suffering from warts. As of August, 2021, warts affect approximately 10 percent of the population around the world. The prevalence of the diseases is as high as 10 percent to 20 percent in young children.

Along with these, rise in clinical trials conducted by various pharmaceutical companies, and surge in investments for developing specific and sophisticated treatment for viral warts are also crucial factors expected to boost the growth of the market in the upcoming years. Furthermore, escalating developments in the healthcare sector in developed and developing nations, coupled with increasing population are projected to offer lucrative opportunities for market growth in the near future. 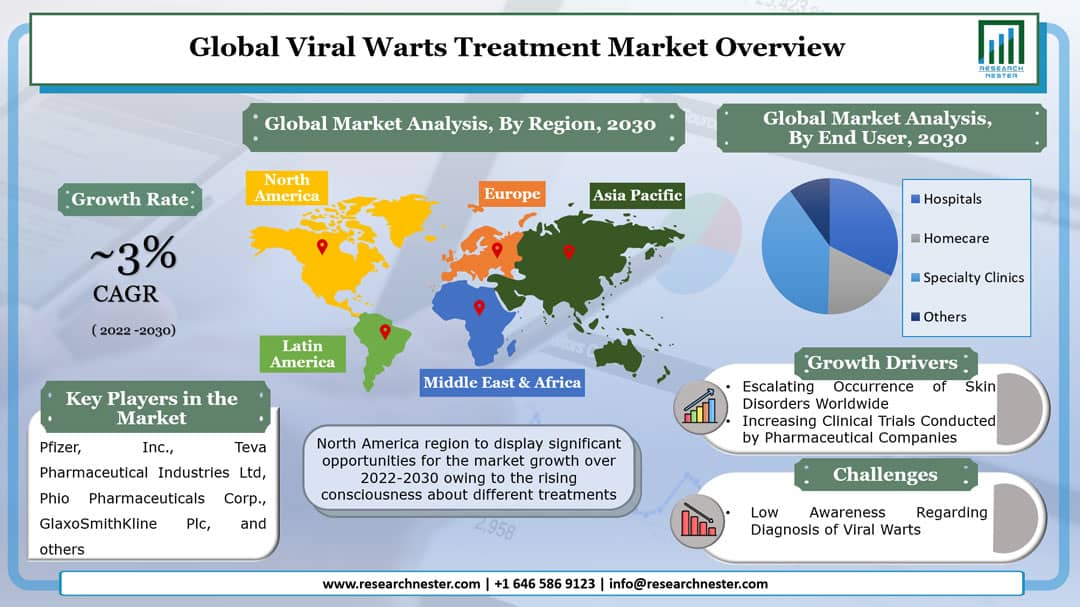 The market is segmented by treatment into physical destruction, chemical destruction, immunomodulation, and others, out of which, the physical destruction segment is anticipated to hold the largest share in the global viral warts treatment market. This can be accounted to the fact that physical destruction, such as cryotherapy with liquid nitrogen, represents the first line of treatment for different types of warts, providing cure rates of 50 percent to 80 percent. Apart from this, the immunomodulation segment is also assessed to grab a significant share over the forecast period ascribing to the low cost, readiness in availability and low chance of complications associated with this type of treatment. Additionally, on the basis of end user, the specialty clinics segment is predicted to acquire the largest share by the end of 2030, which can be credited to the growing preference of people to pursue treatment in a facility specializing in the treatment of the disorder. CLICK TO DOWNLOAD SAMPLE REPORT

On the basis of geographical analysis, the global viral warts treatment market is segmented into five major regions including North America, Europe, Asia Pacific, Latin America and the Middle East & Africa region. The market in the North America is estimated to gather the largest share over the forecast period on the back of the rising awareness regarding different treatment options, well-established healthcare infrastructure and high healthcare spending in the region. As per the data provided by the Centers for Disease Control and Prevention, the total national health expenditure in the United States accounted for a value of USD 3.6 trillion in 2018, or USD 11,172 per capita. The total value of the same as share of GDP was 17.7 percent that year. In addition, increase in drug approvals is also expected to boost the region’s market growth in the coming years. Moreover, the market in Europe is also predicted to acquire a notable share during the forecast period, which can be credited to the growing research and development activities in the healthcare sector, and presence of prominent market players in the region. 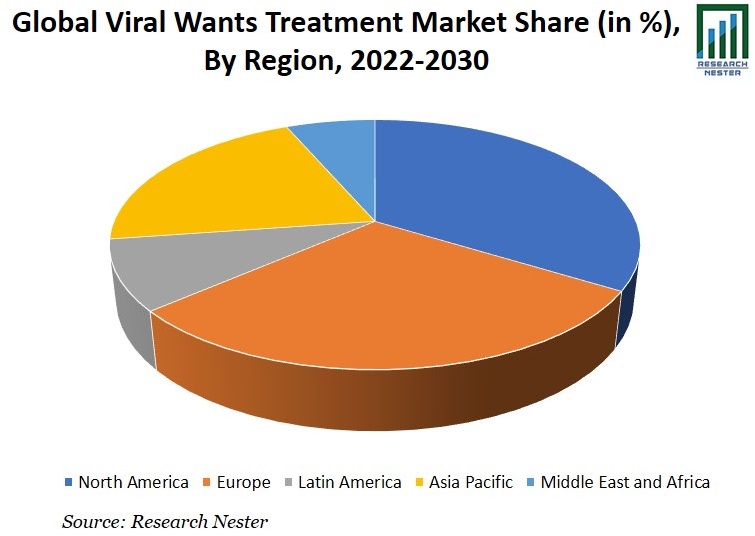 The global viral warts treatment market is further classified on the basis of region as follows:

By Mode of Administration

What are the major factors driving the growth of the viral warts treatment market?

What would be the CAGR of viral warts treatment market over the forecast period?

What are the challenges affecting the viral warts treatment market growth?

Lack of awareness about diagnosis of viral warts is estimated to hamper the market growth.

Which region will provide more business opportunities for growth of viral warts treatment market in future?

Who are the major players dominating the viral warts treatment market?

What are the segments in the viral warts treatment market?

The market is segmented by treatment, drug distribution channel, mode of administration, end user, and by region.

Which segment captures the largest market size in the treatment segment in the viral warts treatment market?

The physical destruction segment is anticipated to hold largest market size in value and is estimated to grow at a notable CAGR over the forecast period and display significant growth opportunities.