Extensive insights into the Growth of U.S. SCARA Robotics Market amidst COVID-19

SCARA or Selective Compliance Articulated Robot Arm is a robot which stays rigid in Z-axis and is compliant with X-axis and Y-axis. These robots are designed to handle a wide variety of material handling operations in the manufacturing process and are also used in warehouse robotics.  The robotic structure often consists of two arms operating on both X-axis and Y-axis and the intersection between the two arms. These robots are designed to offer repetitive accuracy, consistent reliable performance in heavy workloads and in harsh environment. 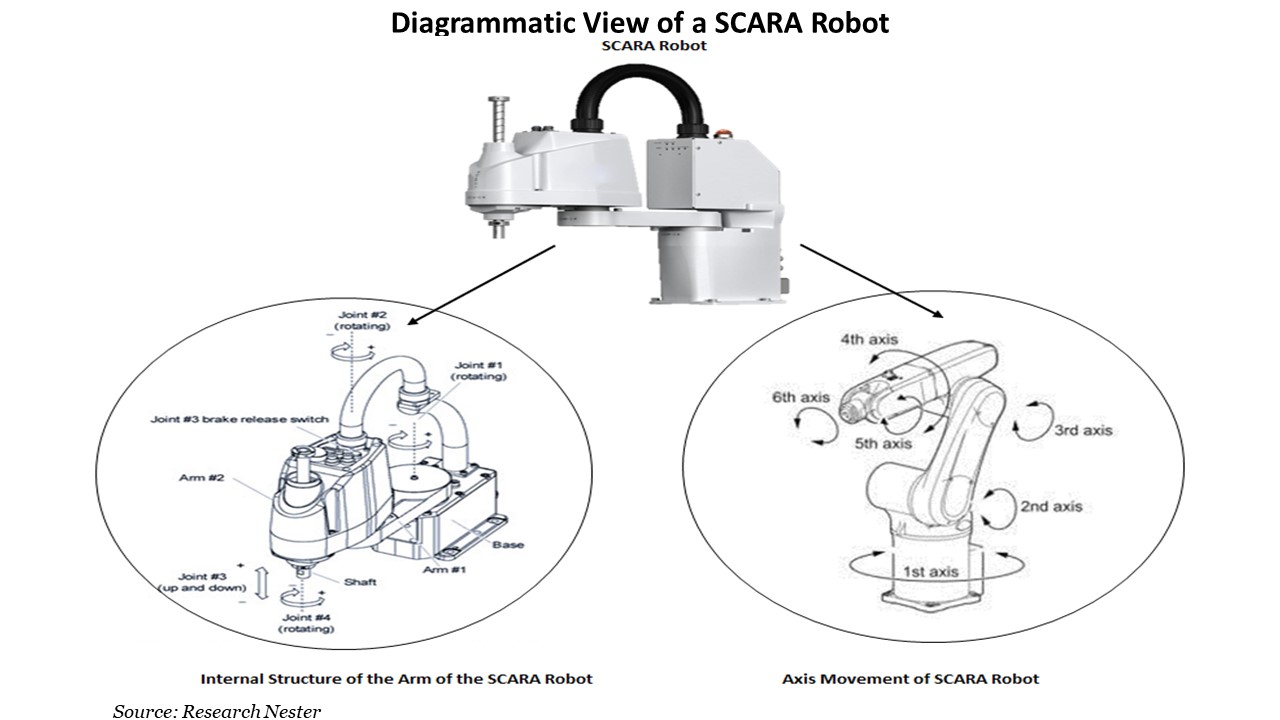 Increasing adoption of Industry 4.0 amongst manufacturers, which is also revolutionizing the manufacturing process, is believed to benefit the expansion of the U.S. SCARA robotics market. Various end user industries, for instance, automotive, food & beverage, semiconductor and chemical & petrochemical among others, are in the need of leveraging their production capacities in order to meet the demand, which is anticipated to raise the deployment of robotics in these industries. These factors are driving the manufacturers of SCARA robots to develop and meet the market demand. According to the Robotics Industries Association (RIA), robot manufacturers in the country have witnessed an increase in the shipments of robots of around 15 percent to 28,478 in 2018 in comparison to 2017. Additionally, according to International Federation of Robotics (IFR), estimations for annual shipments of multipurpose industrial robots in the U.S. is estimated to reach 46,000 number of units by 2021 from 31, 404 number of units in the year 2016. CLICK TO DOWNLOAD SAMPLE REPORT 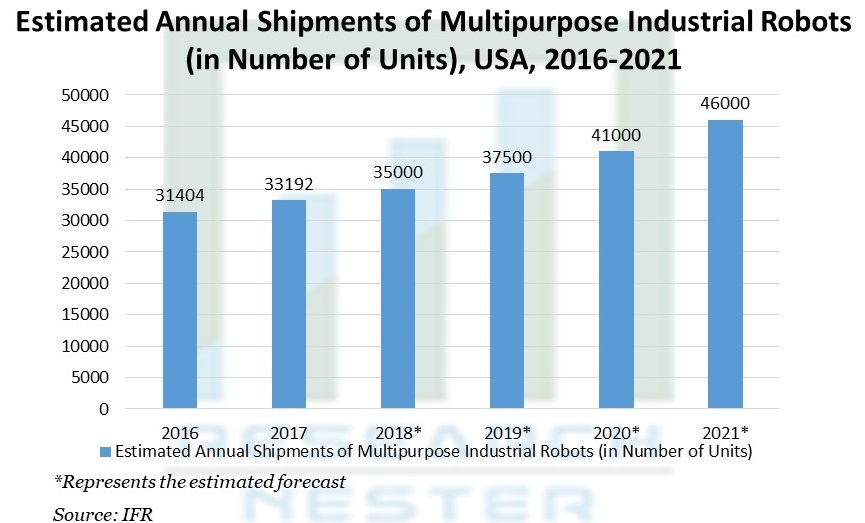 The U.S. SCARA robotics market is segmented on the basis of sub system into hardware, software and services. Services segment is estimated to expand at a CAGR of 9.28% over the forecast period and is showcasing great potential for the future growth of the segment. The need for maintenance of SCARA robots so as to avoid unscheduled downtime is anticipated to promote the growth of the segment over the forecast period. Additionally, with the rising adoption of robots in manufacturing industries so as to address labor shortage issues and enhance the productivity, the robots undergo escalated runtime operations, thereby raising the need for repetitive and scheduled maintenance of these robots. Moreover, with the integration of IoT & AI in SCARA robotic systems, industries are swiftly shifting from preventive maintenance to predictive maintenance of their robotic systems. All of these factors are anticipated to promote significantly towards the growth of the services segment in the U.S. SCARA robotics market. 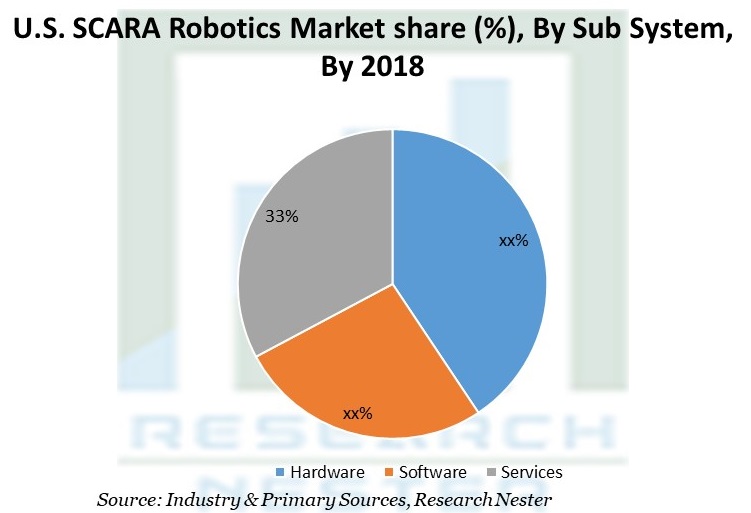 The U.S. SCARA robotics market is segmented on the basis of axis type into 4-Axis, 5-Axis and others. It is observed that there is a high demand for 4-Axis robots, as they are most suitable for pick and place as well as in assembly applications. Although, 4-Axis SCARAs lacks the pitch and yaw motion of 6-Axis robots, additional axis motion or modules are added as per required application and as per the payload requirements, which also makes the 4-Axis SCARA the most acceptable robot amongst end user industries. Additionally, the segment constituted a market share of 83% in the year 2018. 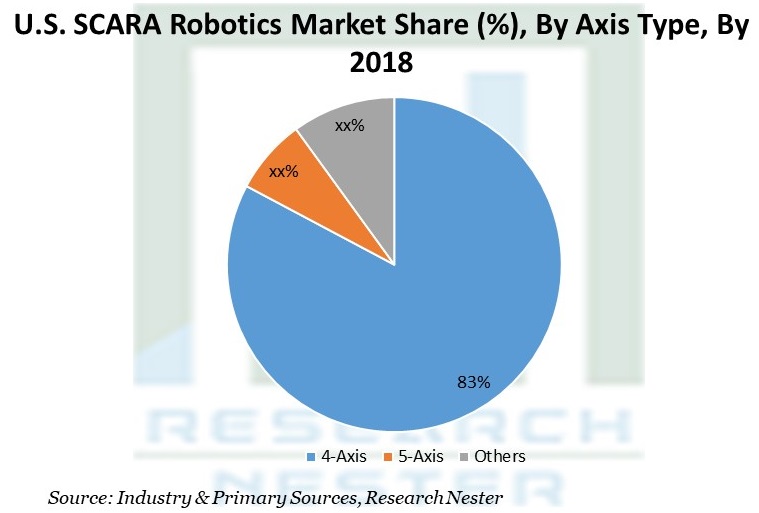 The U.S. SCARA robotics market is also segmented on the basis of application into transport, packaging, assembly, inspection and others. The transport segment held the largest market share of around 34% and is expected to garner significant market share by the end of 2027 on the back of the ability of SCARA robots to handle payload in transport application. Furthermore, these robots also have greater flexibility in arm movement and are also capable of long reach for palletizing applications, which helps them a greater choice in the transportation application segment. 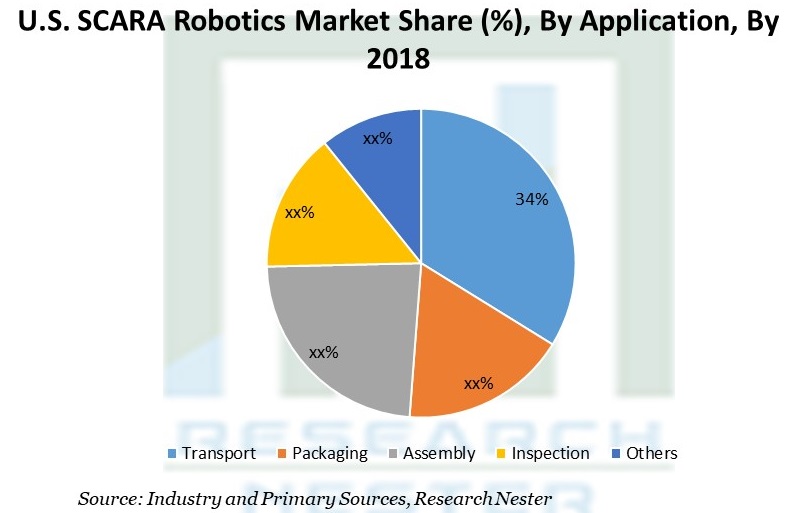 The U.S. SCARA robotics market is thriving on the back of increase in the deployment of robotics across industries, especially, rising automotive industry associated with the increasing vehicle production and the growing food and beverage industry. According to the statistics by Robotic Industries Association (RIA), over 180, 000 robots have been shipped to American companies till date and this number is likely to be increased in the near future. Moreover, SCARA robots have been utilized massively in the automotive industry as it helps to improve the vehicle build quality, reduce warranty costs and also further protects workers from activities which includes greater risks for humans. Additionally, rise in the production of vehicles in the United States is also raising the demand for automation of manufacturing processes. The need for automation in the production processes is also raising the deployment of SCARA robots in the growing automotive industry. Similar changes have also been observed in the U.S. food & beverage industry. According to Packaging Machinery Manufacturers Institute (PMMI), 48% of dairy processors have witnessed the need for automated processing equipment so as to eliminate the manual labor. The report also mentions that 70% of manufacturing places in the U.S. have palletizing robots for pick and place operations, which is further estimated to contribute to the growth of the market in the near future.

High initial deployment costs, coupled with unavailability of skilled personnel for operating the robots in the production line of the manufacturing industry are some of the factors anticipated to obstruct the growth of the U.S. SCARA robotics market. Further, fear of articulated robots taking over SCARA robots, owing to greater flexibility in its movement via rotary joints and the greater ability of articulated robots to carry out heavy load tasks might have a negative impact on the growth of the U.S. SCARA robotics market.