Unmanned sea system comprises of two segments, one is unmanned underwater vehicles (UUV) and the other one is unmanned surface vehicle (USV). USVs carry out their operations on the surface of water without crew, whereas, UUVs are used to perform under water with various communication and functions associated with submerged platforms. Unmanned surface vessels (USV) are also termed as autonomous surface vehicles (ASV) which means that operators are removed from the platform and operations are performed with maximum efficiency.

Under water vehicles are known as underwater robots that operate with less or no human operators. ROV (remotely operated vehicle) or automated under water vehicle both describe robotic work. ROVs are remotely operated by the operators that are not present in the vehicles via radio control or through a cable connecting them to the vehicle for maintenance and repair under the sea.

North America is expected to hold the largest share in terms of revenue in the overall market over the forecast period. This can be attributed to increasing support from government and ruling bodies in marine and naval unit along with increased threats and illegal activities at sea.

Asia Pacific is also expected to showcase promising growth in the market owing to growing mining activities and increased demand for underwater vehicles by mining industries. Additionally, increased export of ores and minerals by countries such as Australia, China and India is also expected to positively support the growth rate of the market during the forecast period. Further, rising competition and innovations in R&D solutions in unmanned sea system is estimated to drive the market growth in Middle East & Africa region. 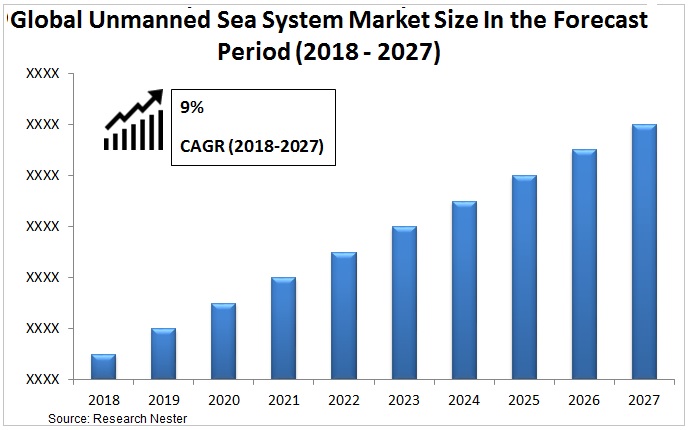 Global unmanned sea system market is further classified on the basis of region as follows: 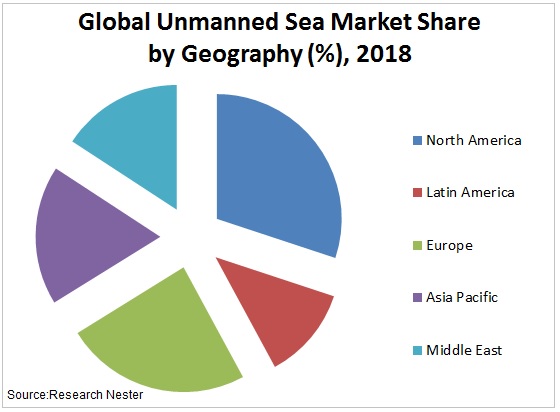 According to the data provided by the ‘World Bank’, the military expenditure around the world increased from USD 1.324 Trillion in 2007 to USD 1.701 Trillion during 2017. Increased funding from government and defense sector is estimated to play an important part behind the growth of the market.

There is an increase in threats and illegal activities at sea from the past few years. To avoid such incidents, there is a huge need for better tactical and networking strategy along with growing demand from marine sector for automated unmanned surface vessels. With government support to strengthen the naval unit, the market is estimated to expand significantly over the forecast period.

Increased demand for minerals and ores in mining industry for underwater vehicles for searching mineral rich area is supporting the growth of the market and is further expected to strengthen the market shares over the forecast period.

One of the challenging factors that is estimated to hamper the growth of market is the problem in network and communication system due to the connectivity issues in water.