Non-invasive prenatal testing includes a simple blood test that determines the presence of any genetic abnormality in the fetus. The test is performed by screening the maternal blood and analyzing the cell-free DNA present. These fragments of DNA come from the placenta, which contains the same DNA as that of the fetus, thereby making early detection of any genetic defects in the fetus possible. The genetic defects might consist of aneuploidy, Down syndrome, trisomy 18, trisomy 13 and others. These are mainly caused by deletion of duplication of the chromosomes. The market for non-invasive prenatal testing in the United States is predicted to grow by a CAGR of 12.52% during the forecast period, i.e., 2020-2027. Further, the market is anticipated to reach USD 2,318.81 million by the end of this period. On the other hand, the global non-invasive prenatal testing market was valued at USD 2,168.79 million in 2018 and is projected to reach a market value of USD 6,406.77 million by the end of 2027. Out of all the regions globally, the market in the U.S. region is estimated to witness the highest growth in the upcoming years. 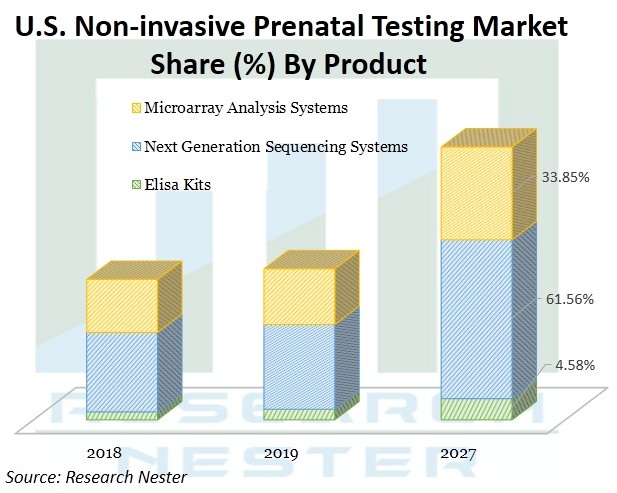 The U.S. non-invasive prenatal testing market is segmented on the basis of application into aneuploidy, micro-deletion, trisomy and others, out of which, the trisomy segment is estimated to hold the largest share in the market and grow at the highest rate during the forecast period. This screening method is increasingly being used for the determination of any fetal trisomy which increases the demand for this segment in the market.

On the basis of end user, the market is segmented into hospitals, diagnostic labs, clinics and others. The hospital segment is estimated to hold the largest share in the market in the upcoming years as a result of higher patient population along with the rising demand for better care and treatment. However, the highest growth rate over the forecast period is anticipated to be observed by the diagnostic labs segment on account of presence of specialized staff and advanced medical equipment. 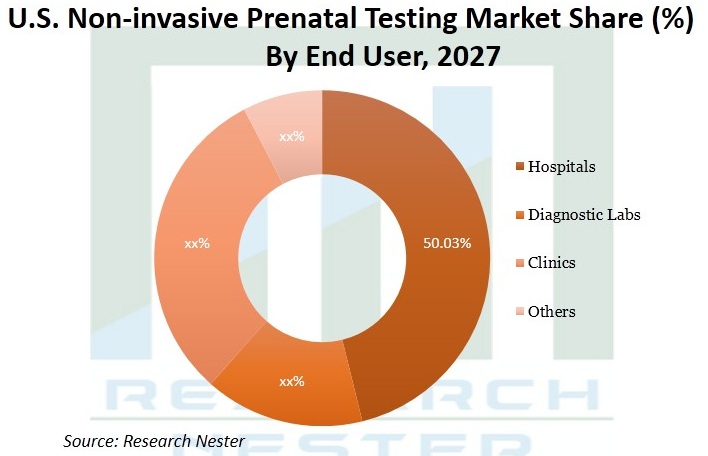 According to the United Nations, approximately 3,000 to 5,000 children are born with Down syndrome every year. The chromosome 21 disorder has affected around 250,000 families in the United States. The growing number of chromosomal abnormalities that lead to genetic disorders are estimated to drive the demand for prenatal screening in order to ensure early detection of any such disorder. The chromosomal aberration might result in miscarriages or health disorders in the children such as heart diseases. In order to prevent any serious health issues, the demand for prenatal testing techniques is predicted to rise in the coming years. Another major factor contributing towards the market growth is the introduction of non-invasive prenatal testing techniques. The non-invasive technique, higher safety and accuracy as compared to invasive testing methods are some features of this procedure which raise its demand in the market.

The prenatal screening is done in the first and second trimester in order to ensure primary prevention for Down syndrome. As NIPT is not reimbursed, the testing becomes highly costly for people which is hence estimated to become a restraining factor for the market growth. Another factor hampering the market growth is the inaccuracy of NIPT testing methods. In this technique, false-positive and false-negative results might be possible which is predicted to slow the market growth down. Further, the strict government policies in the United States are anticipated to hinder the growth of non-invasive prenatal testing market. This can be attributed to prenatal testing being a highly expensive procedure and for which the costs are not covered by the insurance companies.