In hydroponic system, natural products are grown without using the soil. The hydroponics system is great for crop and environment. It also eliminates the need for herbicides and pesticides as compared to traditional method. Crops such as cabbage, peas, exotic vegetable and salad vegetable are best for the use of hydroponics techniques. Factors such as these are expected to increase the demand for hydroponics in upcoming years. The hydroponic market flourished at a noteworthy pace in previous years and accounted for USD 880.7 Million in 2017 owing to its brilliant technique of growing crops without soil. Leading manufacturers are continuously enhancing the performance of the hydroponic products with the help of advanced equipment used in hydroponics farming, adding new features and launching new products to attract the consumers.

Increased cultivation of medicinal plants and rising changes in farming approach is expected to aid the growth of the U.S. hydroponics market. Factors such as increasing adoption of hydroponics systems for growing plants in small area are opening a gateway of opportunities for the hydroponics in the U.S. market. Further, the U.S. hydroponics market has been segmented by crop type into tomato, microgreens, lettuce & leafy vegetables, pepper, cucumber, marijuana, strawberry and others. Among these segments, the lettuce and leafy vegetables segment held the dominant market size during 2017 and is predicted to continue its dominance over the forecast period by crossing USD 1500 Million by 2025. Further, this segment is expected to observe a growth rate of 3.9x over the forecast period. The second largest segment in the U.S. hydroponics market was microgreens with a total market share of 20% in 2017 and is predicted to account for second highest market size in 2025. Furthermore, marijuana segment is estimated to witness significant demand and is believed to grow with highest CAGR of 22.4% between the period 2018 and 2025.CLICK TO DOWNLOAD FREE SAMPLE 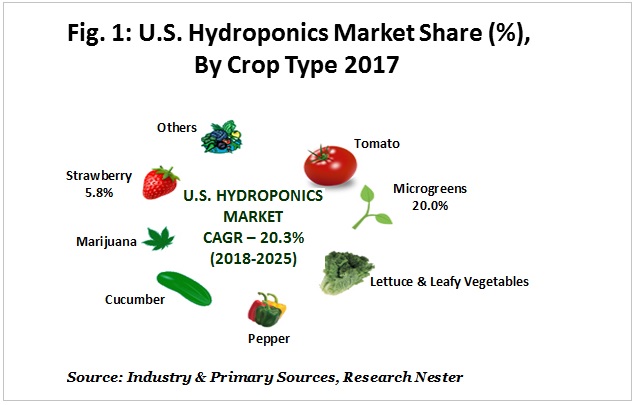 The U.S. hydroponics market is thriving on the back of growing population of America which is decreasing the arable land cultivation, hence promoting the indoor vertical farming or soil less farming.  According to the World Bank, there is a deduction of 3% land in the past 54 years which may lead to more urbanization and adoption of hydroponics in the years to come.

The rising demand for healthy food and higher yield as compared to traditional agricultural methods is anticipated to drive the growth of the hydroponics market in U.S. Further, hydroponics system of cultivation is less time consuming, can be cultivated closer to the customer, provide people fresh and healthy goods as well as reduce transport emission. These factors are expected to foster the growth of the market.

Additionally, with the rise in need for hydroponics farming method in North America, the eco-friendly techniques are anticipated to be introduced. This is also believed to aid the U.S. hydroponics market to grow in near future.

The high initial set-up cost is one of the major challenges faced by the hydroponics market. In addition to that, lack of experience and technical knowledge on hydroponics plantation might hinder the growth of the U.S. hydroponics market over the next few years.

Hydrofarm Inc., a leading manufacturer and wholesale vendor of indoor gardening and hydroponics products announced the acquisition of Eddi’s Wholesale Garden Supply and the distribution division of Greenstar Plant Products which helped the company to strengthen its product portfolio segment and also enhanced their growth opportunity in the US.

Moreover, other key and niche players are working towards the expansion of product portfolio along with continuously focusing on the development of the hydroponics equipment in order to gain competitive edge in the U.S. hydroponics market.