Extensive insights into the Growth of Hydroponics Market amidst COVID-19

Hydroponics is basically a soil-less gardening method which involves growing healthy plants using a nutrient like a mineral rich water solution. The complete process of hydroponics requires only nutrients, water, and sunlight to let plants grow a lot better with their roots in water.

Hydroponics market is expected to thrive at a notable CAGR of more than 15% over the forecast period. In present, where the world is standing at risk of food & water scarcity, solutions such as hydroponics are expected to witness extraordinary demand in future due to their environmental benefits. The market of hydroponics is likely to grow on the back of its advantages over traditional methods of farming such as no use of pesticide and artificial nutrient, no need for soil, fast plant growth, easy methods and others. The market is segmented in five major regions including North America, Asia Pacific, Europe, Middle East & Africa and Latin America regions. Among these regions, North America and Europe grabbed lion shares of global hydroponics market in 2017 and is expected to maintain this lead over the forecast period owing to owing to rising demand for organically grown fruits and vegetables. Further, Asia Pacific and Latin America regions are showcasing significant potential for future growth of hydroponics market in this region. The rising demand for healthy food and higher yield as compared to traditional agricultural methods is anticipated to drive the growth of the Hydroponics Market in United States. 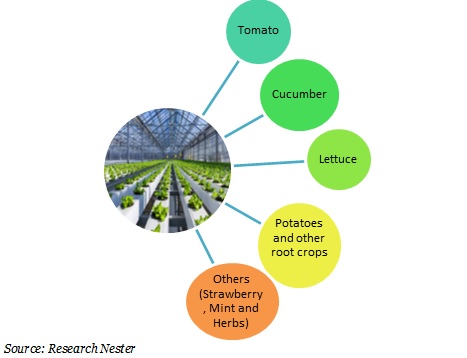 Tomato segment by crop types is projected to capture major shares of market over the forecast period. Production of food products such as tomatoes, corianders, lettuce, capsicums and other vegetables through hydroponics for business purposes is more profitable and sustainable and this is a major factor that is expected to propel the growth of market in upcoming years.CLICK TO DOWNLOAD FREE SAMPLE

Our in-depth analysis has segmented global hydroponics market into the following segments:

Global hydroponics market is further classified on the basis of region as follows: 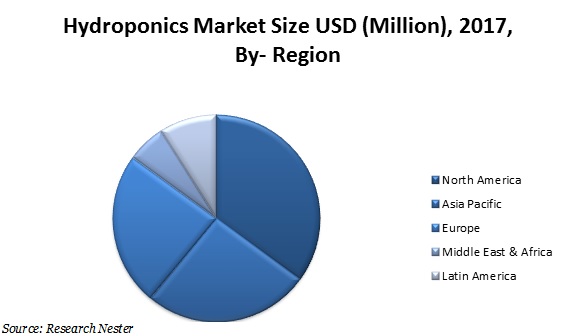 Apart from this, the arable land area worldwide is reducing at critical rate. Through hydroponics a person can make better use of space and location. Further, this space savings benefit of hydroponics is likely to boost the growth of market in future. Hydroponics is an efficient way to handle the world hunger crisis. Current world population of 7.3 billion is projected to grow to 8.5 billion by 2030, creating a need for greatly increased food production capacity. In addition to this, since 1998, food production costs have increased 57% and purchased input costs have increased 74%, but there has been no significant change in aggregate value of net farm income in the last 40 years. The hydroponics is expected to emerge as a key solution to such problems in future. However, it could be expensive to setup the hydroponics system as the initial set up cost of hydroponic system is high. Also these systems require constant supervision. Such obstacles are expected to hamper the growth of global hydroponics market in future.

The global hydroponics market is segmented as follows: