Tonometry is referred to diagnostic procedure to measures the pressure inside your eye that is known as intraocular pressure (IOP). This procedure is used for examination of glaucoma disease which can cause blindness by the damaging the nerve inside the eye. Further, tonometer is the optical device for the diagnosis of the intraocular pressure. 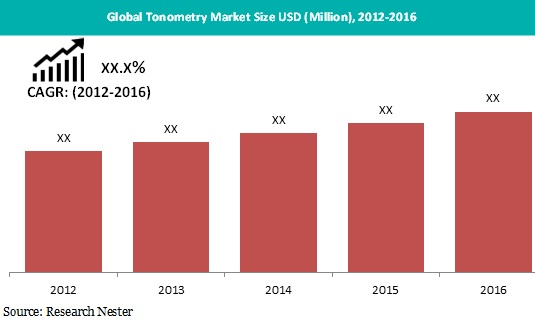 In terms of geography, North America is projected to dominate the global market of tonometry during the forecast period. Additionally, U.S. is the leading country in this region due to numerous factors such as presence of major key vendors. Moreover, various players are rigorously investing into research and development activities related to imaging diagnostic products which is also projected to flourish the growth of tonometry market. Further, U.S. health care spending increased by 5.8% to reach USD 3.2 trillion which is also expected to impel the growth of tonometry market by the end of 2024. CLICK TO DOWNLOAD SAMPLE REPORT

Europe region captured the significant share in the market of tonometry in 2016. Further, Western Europe countries such as U.K., Germany and others are believed to be the major countries witnessing the augmented demand for tonometry owing rising healthcare expenditure.

Our in-depth analysis segmented the global tonometry market in the following segments:

Global tonometry market is further classified on the basis of region as follows:

Rising incidences of glaucoma disease coupled with advancement in imaging diagnostic products for better diagnosis is expected to be the dynamic factor behind the rapid growth of tonometry across the globe. Further, diabetes is one the major factor which is increasing the prevalence of eye disorders among the population. Moreover, growing old age population along with high occurrence of diabetes among older population across the globe is a major factor which is likely to propel the demand for tonometer during the forecast period. Additionally, according to U.S. Census Bureau, 8.5 percent of people worldwide (617 million) are aged 65 and over, further this percentage is projected to boost to nearly 17 percent of the world’s population by 2050 (1.6 billion).

Furthermore, government initiatives to develop the healthcare infrastructure on the back of strengthening GDP figures of developing nations such as China, India, Malaysia and other countries is envisioned to bolster the growth of tonometry market. Additionally, according to vision2020australia, in Australia, 801,000 number of people aged 40 or over is expected to loss there vision by the end of 2020. Further, this factor is also predicted to foster the growth of tonometry market.

However, high cost of tonometry is expected to hinder the growth of tonometry market during the forecast period.