Therapy gloves are used for providing treatment by applying pressure in order to relieve pain in joints of the hands and improve functional abilities of an individual who might be suffering from rheumatoid arthritis and other forms of inflammatory arthritis. Apart from that, therapy gloves help in management of hypertrophic scarring in case of burn injuries and reduce swelling in cases of lymphedema. Individuals who experience symptoms such as pain, stiffness and swelling of wrist and other joints of the hands would be able to obtain relief to a great extent after wearing therapy gloves.

The global therapy gloves market is anticipated to grow at a significant rate over the forecast period, i.e., 2020-2027. The market is segmented by size, by product type, by design, by material type, by end user and by region. On the basis of end user, the market is further segmented into physiotherapy centres, home care and others, out of which, the home care segment is estimated to grow at the highest rate on account of rising geriatric population and the growing prevalence of arthritis among them. This can be attributed to the rise in the number of individuals affected by arthritis globally. As per the Centers for Disease Control & Prevention, around 52.5 million population were suffering from arthritis of various types in the United States in 2015. 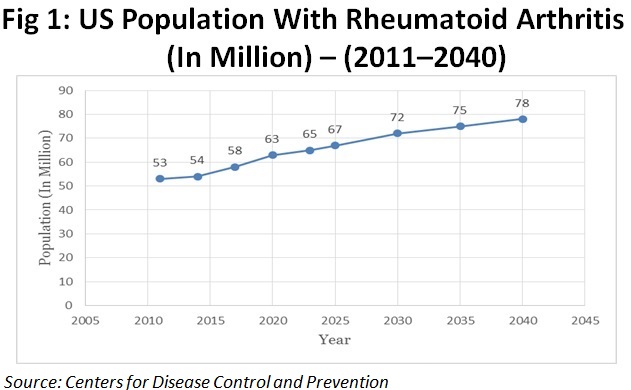 Rising Elderly Population To Raise The Demand For Therapy Gloves

The rapid rise in the number of individuals above the age of 60 who are more prone to health related complications, especially those affecting the joints, is anticipated to spike the demand for therapy gloves in the next decade. According to a report published by the National Institutes of Health, in the year 2015, at least 8.5% of the global population were aged 65 years old and above. This number is anticipated to touch 17% of the global population by 2050.

There has been a significant rise in the number of obese individuals across the globe on account of increasing urbanization, poor diet, lifestyle changes and lesser physical activity among people. According to statistics presented by WHO in 2018, about 650 million adults above the age of 18 were considered obese in the year 2016. This has led to a rise in the number of individuals that are at a higher risk of developing rheumatoid arthritis, thereby increasing the demand for medication and therapy, which is anticipated to drive the growth of the market over the forecast period.

Rising Smoking Habits Among People To Increase The Market Growth

Cigarette smoking causes individuals to develop arthritis and related disorders that require immediate treatment. In 2015, the number of individuals who smoke cigarettes were recorded to be around 1.1 billion globally as per a WHO report published in 2019. Moreover, air pollution prevalent in urban areas or near highways is one of the factors that has led to increased number of individuals suffering from arthritis. Considering the above factors, therapy gloves have enough potential to create significant demand globally over the forecast period, thus contributing to the growth of the market.

Although, therapy gloves help to relieve an individual from pain and stiffness in the hands and fingers, they vary in terms of comfort and pain for each individual. These gloves may be either too loose or too tight for the user to wear, which might trouble them. Moreover, wearing these gloves may not be able to completely eliminate the symptoms, although the individuals with arthritis problems would be able to carry on with their routine tasks easily.

Our in-depth analysis of the global therapy gloves market includes the following segments:

On the basis of regional analysis, the therapy gloves market is segmented into five major regions including North America, Europe, Asia Pacific, Latin America and Middle East & Africa region. The market in North American region is anticipated to occupy the leading market share in therapy gloves market owing to the rise in number of cases of individuals suffering from arthritis related ailments, rising government expenditure for improving healthcare and medical facilities in the region and increasing awareness about this medical condition in the region. The market in Asia Pacific region is estimated to grow steadily, owing to entry of several new drugs for treatment of all forms of arthritis in the market and the expansion of medical and healthcare infrastructure in the region. Besides, as per a WHO report on road traffic injuries compiled in 2018, 93% of the world’s fatal road accidents occur in the low and middle income countries. Trauma caused by road accidents and other such incidents might result in arthritis and related disorders. These are the factors anticipated to drive the growth of the market in the region. 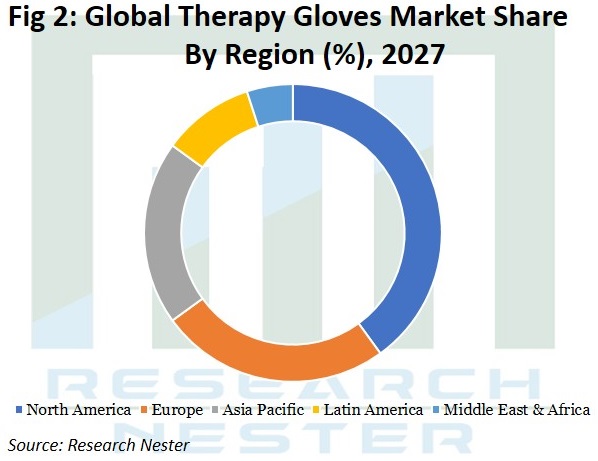 The global therapy gloves market is further classified on the basis of region as follows: