The global sperm density testing market is estimated to garner notable revenue by growing at a ~6% CAGR over the forecast period, i.e., 2022 – 2031. The growth of the market can be accounted to factors, such as, rising cases of infertility in males, convenient access to fertility care, and others. According to data released by World Health Organization (WHO) in 2021, it was stated that 186 million individuals of the global population have infertility, meanwhile, 48 million couples suffer from infertility. Furthermore, an average sperm count is estimated to be between about 15 to 200 million sperm per mL of semen, however, this density can be lowered due to many factors, such as, smoking, obesity, alcohol consumption, and others. Such habits are responsible to reduce testosterone levels required for monitoring the production of the sperms. A report published by Harvard University demonstrated the fact that obese men showed low sperm count, and 81% more likely to produce no sperm. Additionally, a higher prevalence of obesity is observed in the global population in recent decades. Such factors are estimated to boost the market growth. 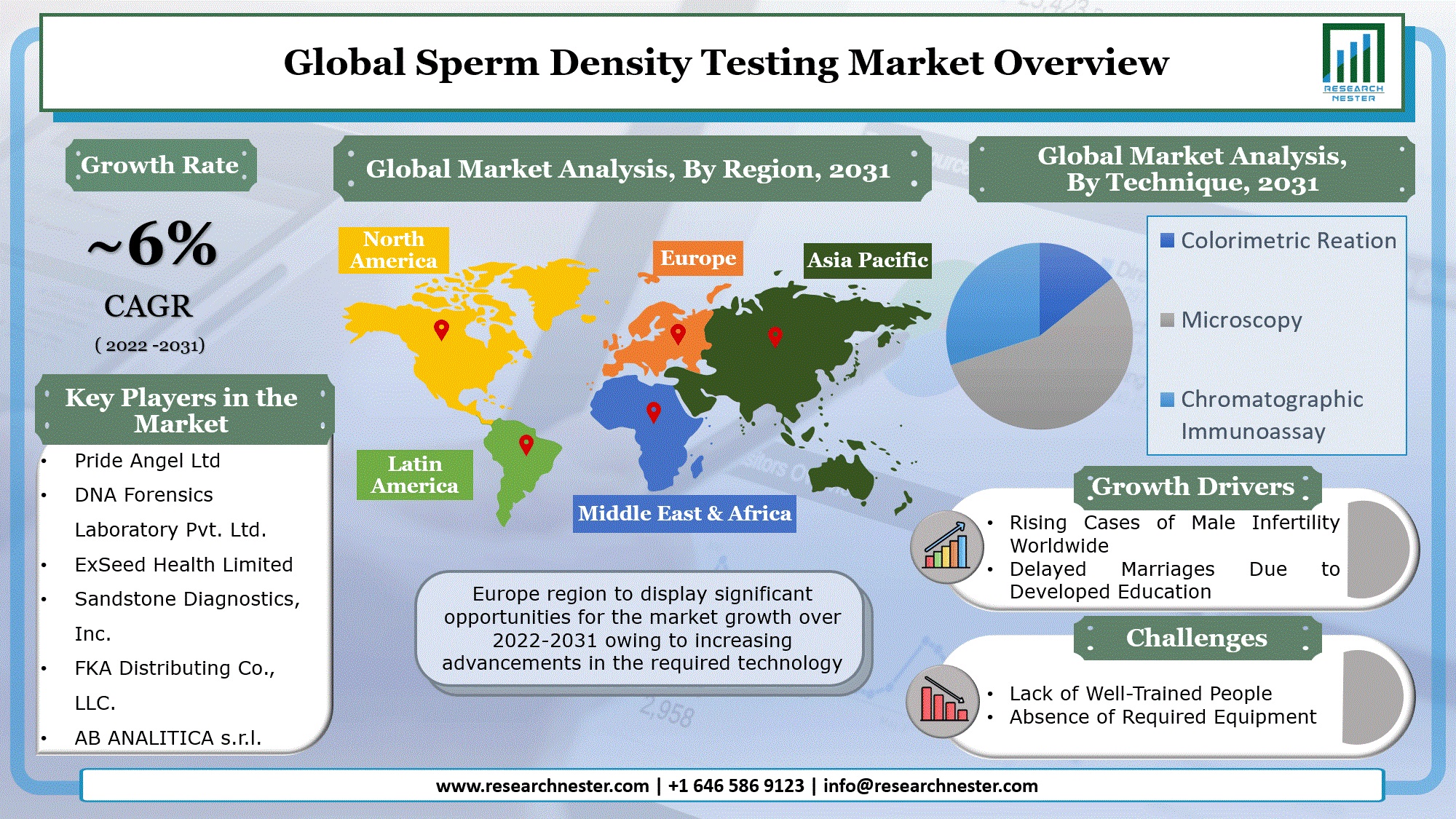 The global sperm density testing market is segmented by technique into colorimetric reaction, microscopy, and chromatographic immunoassay, out of which, the microscopy segment is anticipated to hold a significant share in the global sperm density testing market over the forecast period. This can be accounted to its higher accuracy and effectiveness. People prefer microscopy over other methods because it provides accurate results at reasonable pricing.

Regionally, the global sperm density testing market is segmented into five major regions including North America, Europe, Asia Pacific, Latin America, and the Middle East & Africa region. The market in the Europe region is estimated to witness noteworthy growth over the forecast period on the back of rising advancements in technology, to provide a required facility in the male infertility treatment and diagnostics field. Additionally, a large number of significant market key players are present in the Europe region. A report published by the National Library of Medicine (NLM) showed that 7.5% of European men have infertility due to lower sperm density.

Furthermore, the global sperm density testing market is also projected to grow in North America region over the forecast period owing to the higher prevalence of male infertility. Other factors, such as, late childbearing owing to delayed marriage, advanced education, and growing cases of obesity are accounted for low sperm density. A report published by the Centers for Disease Control and Prevention (CDC) in 2019 showed that there were 489 fertility clinics that perform ART in the United States. These are the major factors to provide significant opportunities to grow at a larger scale for the global sperm density testing market over the forecast period. 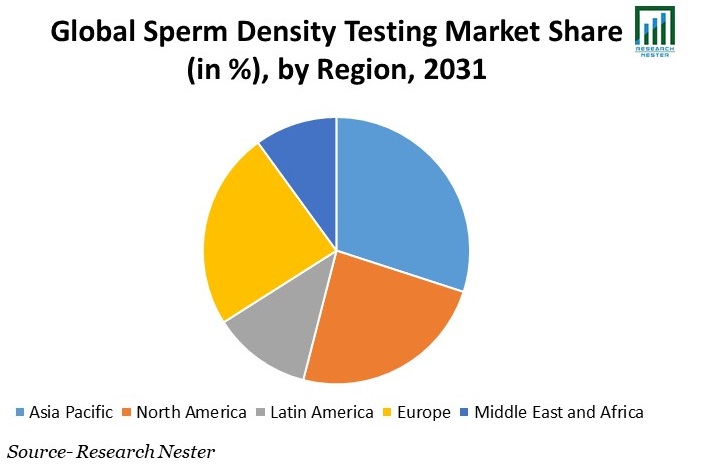 The global sperm density testing market is further classified on the basis of region as follows:

1) What are the major factors driving the growth of the sperm density testing market?

Ans: Rising cases of male infertility worldwide, and affordability of infertility care are the major factors driving the growth of the sperm density testing market.

2) What would be the CAGR of sperm density testing market over the forecast period?

3) What are the challenges affecting the sperm density testing market growth?

Ans: The lack of well-trained people to perform the operations is estimated to hamper the market growth.

4) Which region will provide more business opportunities for growth of sperm density testing market in future?

Ans: Europe region will provide more business opportunities for growth of sperm density testing market in future on the back of rising cases of male infertility in the region.

5) Who are the major players dominating the sperm density testing market?

Ans: The company profiles are selected based on the revenues generated from the product segment, the geographical presence of the company which determines the revenue-generating capacity as well as the new products being launched into the market by the company.

7) What are the segments in the sperm density testing market?

Ans: The market is segmented by test type, technique, end-user, and region.

8) Which sub-segment captures the largest market size in the technique segment in the sperm density testing market?

Ans: The microscopy segment is anticipated to hold the largest market size in value and is estimated to grow further over the forecast period and display significant growth opportunities.