Soft magnetic composites (SMCs) are ferromagnetic materials, which are made of iron powder particles and are surrounded by an electrically insulated layer. These materials can be easily magnetized and demagnetized and are primarily used to enhance or channel the flux produced via electric current. A wide array of elements is alloyed together for the formation of soft magnetic Composites materials. Some of the major soft magnetic materials include soft ferrite, iron-cobalt, silicon steel, and others. These materials are formed via the combination of different elements, which can either be a major or minor constituent in the material. Some of the most commonly used elements in soft magnetic materials include iron (Fe), nickel (Ni), Zinc (Zn), Cobalt (Co), and manganese (Mn). However, certain other elements, including vanadium (V), silicon (Si), phosphorus (P), boron (B), and molybdenum (Mo) are also used in minor quantities. The global SMCs market is thriving on the back of constant efforts being made for the development of materials in the field of magnetic materials along with transformations in the automotive and energy & power sector. Advancements in the development of the materials of SMCs have helped in increasing the utilization of SMCs in various components as compared to the traditional powder metallurgy products. The global SMCs market accounted for a market value of USD 21,375.1 million in the year 2018 and is expected to grow at a CAGR of 8.2% over the forecast period, i.e. 2020-2027. The market is further slated to achieve a market value of USD 42,356.6 million by 2027.

The global soft magnetic composites (SMCs) market is segmented by regions into North America, Latin America, Europe, Asia Pacific and Middle East and Africa. Among these regions, the market of Asia Pacific soft magnetic composites (SMCs) market is anticipated to hold the largest market share of around 43.26% in the year 2027. The market in the region is expected to garner a CAGR of 9.0% during the forecast period and attain a market value of USD 18, 323.5 million in the year 2027 on the back of presence of nations, such as, China, India, Japan, Australia and Southeast Asian countries where there are large number of end-use industries, such as, electric motors, automobiles and energy and power among others, that utilizes SMCs at a massive scale. The market in China is anticipated to outgrow other nations in the region on the back of being the largest producer of iron ore in the region, which is considered as the most significant raw material for different types of SMCs. Further, rising demand from automotive manufacturing on the back of increasing production of light-weight vehicles and electric cars, coupled with favorable financial incentives from the government in the region are some of the factors anticipated to drive the growth of the market in the region during the forecast period. CLICK TO DOWNLOAD SAMPLE REPORT 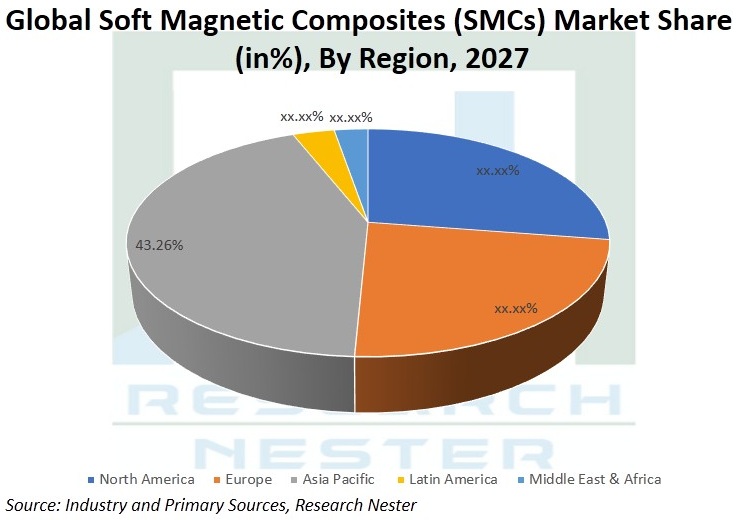 The global SMCs market is segmented on the basis of application into motors, compressors, transformers, generators and others, out of which, motors segment is anticipated to hold the largest market share of around 50.24% in the year 2027. The segment is anticipated to garner a CAGR of 8.70% over the forecast period and attain a market value of USD 21, 280.50 million in the year 2027. Application of SMCs in electric motors results in high power densities thereby helping to increase the conversion efficiency of the motor from electrical energy into mechanical energy. In addition, application of amorphous alloy and Si-Fe steel in motors helps to reduce the power loss, which is a common issue observed in motors. 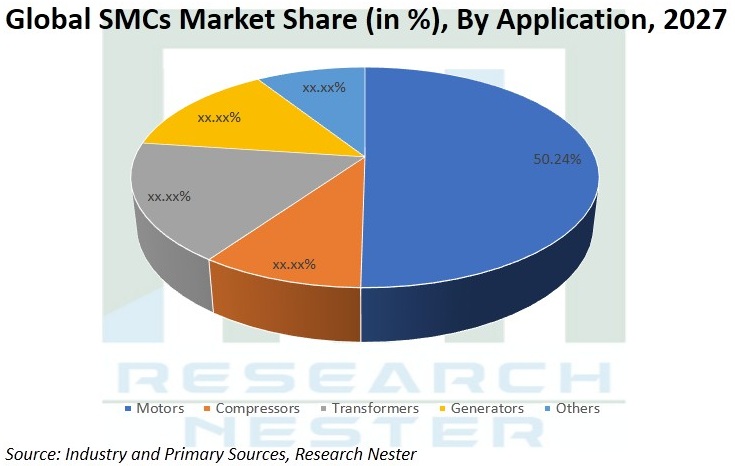 Rising demand for SMCs on the back of increasing application across end use industries is one of the major factors anticipated to fuel the growth of the global SMCs market over the forecast period. Out of all other end use industries, automotive and electronics industry have showcased a notable increase in the consumption of SMCs on the back of its superior chemical properties, which helps to cater to a wide array of applications, such as, traction motors, pumps, AC/DC converters and others. Moreover, rising sales of electric vehicles, where SMCs are utilized at a massive scale, along with advancements pertaining to electric and hybrid vehicles, both these factors are also anticipated to contribute significantly towards the growth of the global SMCs market during the forecast period.

Utilization of soft magnetic composites have showcased efficient output in the end products when compared to other magnetic materials. Numerous advantages offered by the SMCs  over the conventional materials, such as laminated sheets and silicon steel, and the significant properties exhibited by SMCs, such as low eddy current loss, reduced total care loss at high and medium frequencies, isotropic magnetic and thermal properties and others are some of the factors anticipated to drive the growth of the global SMCs market in the near future. Moreover, compact design and cost-effective features associated with the SMCs in tandem with the increasing demand for electromagnetic devices is also anticipated to propel the growth of the SMCs market in the upcoming years. 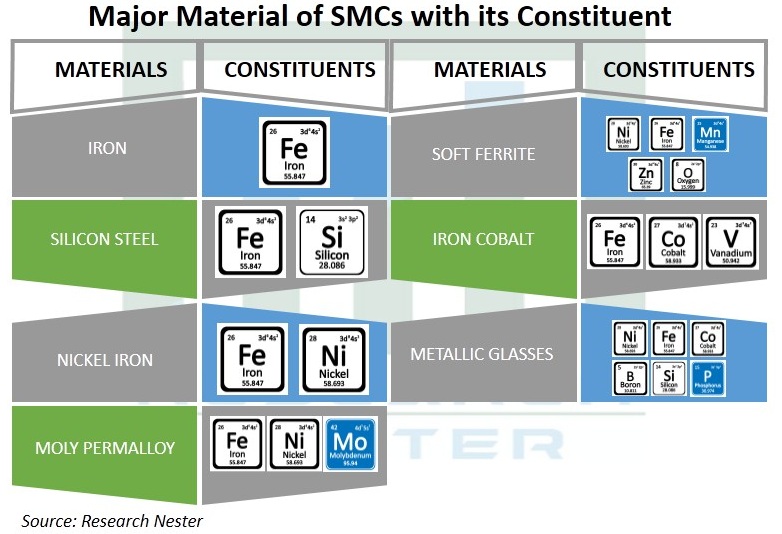 Primary raw materials used in the manufacturing of soft magnetic composites materials, such as silicon steel, nickel-iron, and soft ferrites are generally made of iron ore and nickel. Fluctuations observed in the price of the iron ores along with the other materials is anticipated to act as a key restraint to the growth of the global SMCs market during the forecast period.