The global sniper rifle market, which garnered a significant revenue in 2020, is anticipated to record a modest CAGR over the forecast period, i.e., 2021-2029.  The growth of the market can be attributed to the increase in purchase of military sniper rifles by government agencies and their growing use for sports shooting. The escalating number of sniper rifle procurements in the defense sector can be ascribed to the increasing military expenditure and surge in initiatives for the modernization of equipment by various armed forces across the world. According to our analysis, the global military expenditure reached almost $2 trillion in 2019, the highest value recorded in the past 3 decades. Moreover, with the ability of modern rifles to shoot larger distances with high precision, the sniper rifle market is projected to progress tremendously in the coming years. The rising demand for maintaining a sufficient stock of weapons and ammunition, which is further leading to an increase in the number of arms imports is also anticipated to drive the market growth. As per the data stated by The World Bank, 27.022 billion arms were imported globally in the year 2019. 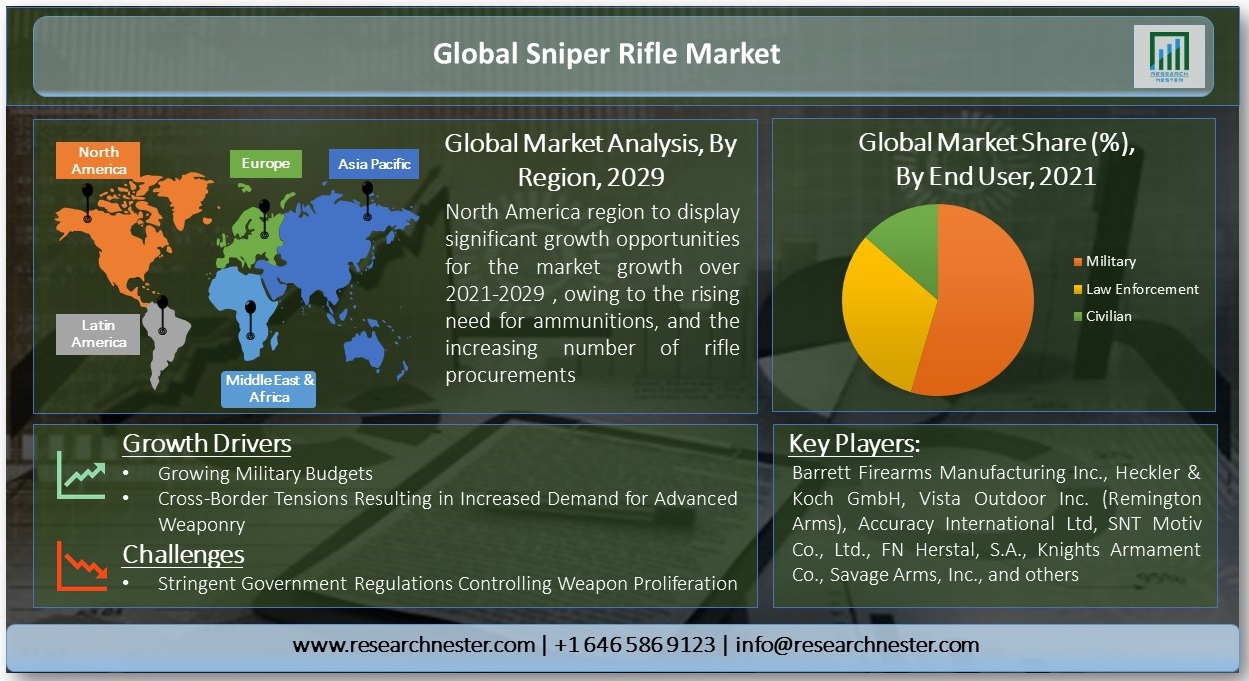 The market is segmented by range into up to 1000 meters, and beyond 1000 meters. Among these segments, the beyond 1000 meters section of the range segment is anticipated to hold the leading share in the year 2021 in the global sniper rifle market owing to the preferences of the armed forces for best weaponry with a range of over 1000 meters. Moreover, countries facing terrorism threats and cross-border tension are obtaining advanced sniper guns for responding to long-term threats, which is estimated to lead to an increase in demand for these weapons, hence propelling the growth of this segment. CLICK TO DOWNLOAD SAMPLE REPORT

Out of the market in these regions, the market in the North American region is anticipated to hold the leading share by the end of 2029. The market in the region is driven primarily by the United States, backed by the rising need amongst the defense forces for advanced ammunitions. The U.S. is one of the leading suppliers of arms and ammunition to many countries around the globe and is estimated to stay a key supplier over the forecast period, owing to an increase in joint agreements with the military organizations of the developing countries. As per our analysis, as of 2019, the USA accounted for almost 40% of the world’s total arms exports.

The market in Europe is also expected to hold a significant share on the back of the presence of countries, namely Russia and France, which hold the second and third largest share in the exports of heavy weapons and sniper rifles respectively. 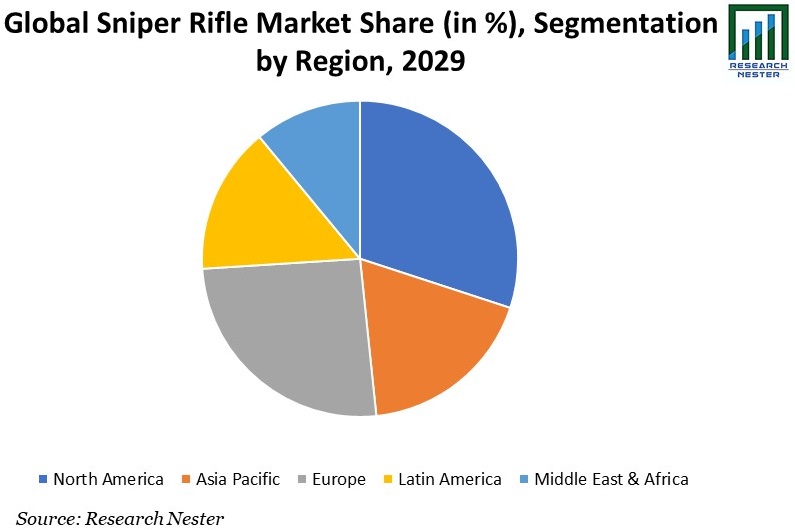 The global sniper rifle market is further classified on the basis of region as follows:

Our in-depth analysis of the global sniper rifle market includes the following segments:

What are the major factors driving the growth of the sniper rifle market?

What would be the CAGR of sniper rifle market over the forecast period?

What are the challenges affecting the sniper rifle market growth?

What are the segments in the global sniper rifle market?

The market is segmented by type, range, end user, and by region.

Which segment captures the largest market size in the range segment in the global sniper rifle market?

The beyond 1000 meters segment is anticipated to hold the largest market size and is estimated grow at a notable CAGR over the forecast period and display significant growth opportunities.

Rising research and development cost is estimated to hamper the market growth.

Which region will provide more business opportunities for growth of global sniper rifle market in future?

North America region will provide ample business opportunities owing to the presence of the U.S., which is a leading supplier of arms and ammunition in the world.