The global smart signaling market is estimated to garner a sizeable revenue and grow at a CAGR of ~21% over the forecast period, i.e., 2022 – 2030. The growth of the market can be attributed to the rapid rate of urbanization in developing countries, increasing demographic growth and growing demand to control problems such as traffic congestion. Along with these, as a result of the surge in the number of road accidents, governments on a world level have taken several initiatives to ensure the safety of passengers on the road, which in turn is anticipated to boost the demand for smart signaling systems in the upcoming years. According to the World Health Organization, 1.3 million people die every year as a result of road accidents. These crashes cost almost 3% of the total GDP of most of the countries. In addition, rising technological advancements associated with the automation of signaling devices by utilizing artificial intelligence (AI) is expected to offer ample growth opportunities to the market in the near future. 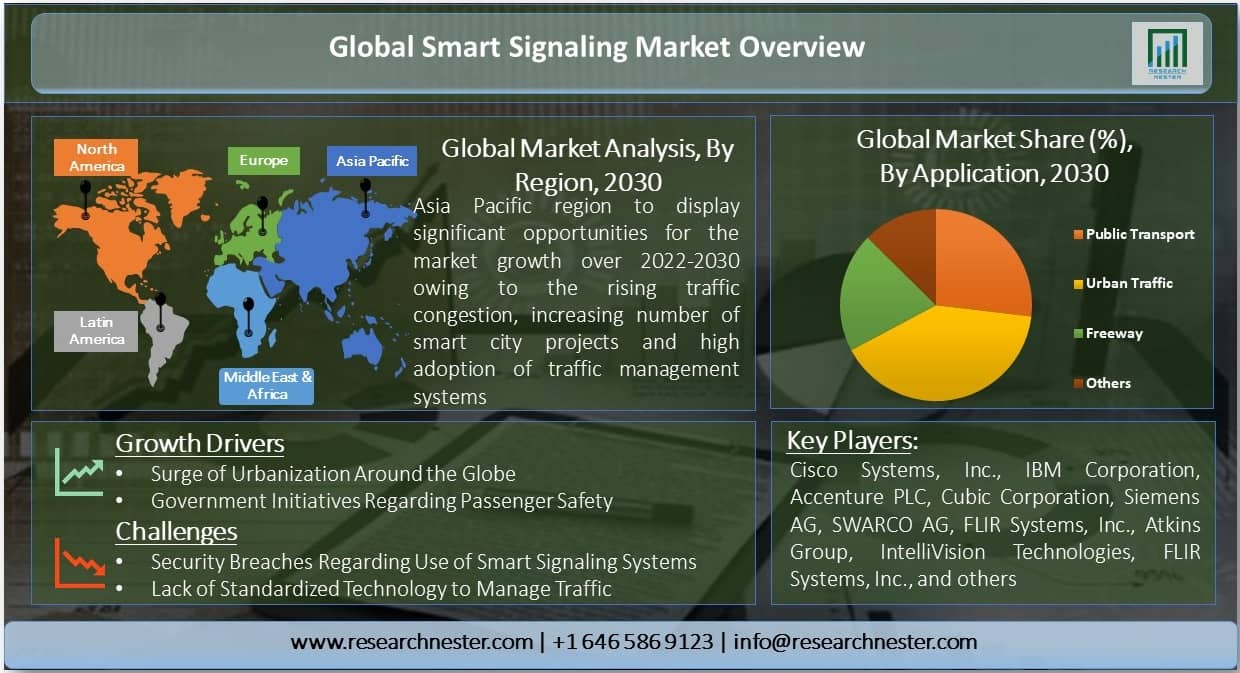 The market is segmented by hardware into display boards, sensors, and surveillance camera, out of which, the surveillance camera segment is anticipated to hold the largest share in the global smart signaling market on account of the usefulness of these cameras in traffic control and monitoring. Furthermore, surveillance cameras are able to record traffic patterns for future studies, issue tickets if somebody violates traffic and provide valuable traffic data that can be maintained by traffic departments. Additionally, on the basis of application, the segment for urban traffic is projected to acquire the largest market share during the forecast period, which can be credited to the increasing urban population around the world and growing traffic on the roadways. As per the World Bank, the urban population of the world rose up to 55.715% of the total world population in 2019, up from 54.823% in 2017.

On the basis of geographical analysis, the global smart signaling market is segmented into five major regions including North America, Europe, Asia Pacific, Latin America and Middle East & Africa region. The market in the Asia Pacific is estimated to witness noteworthy growth over the forecast period on the back of growing adoption of traffic management systems and high traffic congestion in the region. According to the Indian Brand Equity Foundation, in 2010, USD 28.31 billion were allocated from smart city mission, out of which 86 percent projects have been tendered as of now. Apart from these, several ongoing projects related to smart cities and increasing government investments in smart transportation projects are also assessed to drive market growth in the APAC in the near future. Moreover, the market in Europe is anticipated to grab the largest share during the forecast period owing to the high government and private spending on transport infrastructure, rising emphasis on employment of sustainable transport and strong presence of major market players in the region.

The global smart signaling market is further classified on the basis of region as follows:

Our in-depth analysis of the global smart signaling market includes the following segments:

What are the major factors driving the growth of the smart signaling market?

The major growth drivers for the market are rapid urbanization in developing nations and increasing government initiatives to ensure passenger safety.

What would be the CAGR of smart signaling market over the forecast period?

What are the challenges affecting the smart signaling market growth?

Security breaches associated with the use of smart signaling systems and absence of standardized technology for traffic management are estimated to hamper the market growth.

Which region will provide more business opportunities for growth of smart signaling market in future?

Asia Pacific will provide more opportunities for business growth over the forecast period owing to the increasing traffic and growing adoption of traffic management systems in the region.

Who are the major players dominating the smart signaling market?

The major players in the market are Cisco Systems, Inc., IBM Corporation, Accenture PLC, Cubic Corporation, Siemens AG, and others.

What are the segments in the smart signaling market?

The market is segmented by hardware, software, service, application, and by region.

Which segment captures the largest market size in the hardware segment in the smart signaling market?

The surveillance segment is anticipated to hold largest market size and is estimated to grow at a notable CAGR over the forecast period and display significant growth opportunities.