·        2019: Kitro SA, a startup based in Renens, Switzerland that is engaged in offering simplified food waste management solutions has designed a smart food waste bin that can be used for tracking, visualizing and analyzing the food waste that is being disposed off by food outlets which would serve as a guide for the various organizations engaged in food handling operations to make informed decisions to reduce any form of food wastage and losses.

Food waste bins have for long been used for the purpose of disposing off any form of edible food such as uneaten food, plate scrapings or any food that has been left over including many more food items. Several nations have been impacted by the alarming rate at which food has been wasted globally that has led them to strategize on different ways to address the food wastage problems, in order to lower the quantity of food that is being wasted across various regions of the world. According to Food and Agriculture Organization (FAO) of the United Nations, close to one-third of the food produced in the world for human consumption every year that is nearly 1.3 billion tonnes end up getting either lost or wasted. Smart Food Bins are food waste bins that can apply their intelligence to help users cut down on the food that is being wasted. A Smart Food Bin performs the task of taking a picture of the food that is being thrown away. Subsequently, it weighs such food waste discarded and sends the data related to the same onto a computer. The computer that receives the data uses Artificial Intelligence (AI), by which it can inform the user about the nature of food that has gone waste. These AI powered food bins are being seen as a powerful and welcome solution by several regions globally that could help save food from being wasted globally, owing to its offering of multiple benefits that include tracking and measuring all the food that is wasted and thrown into the bin. The data obtained from the usage of such smart food bins would be of immense benefit for restaurants and food outlets who are dealing with food on a daily basis. 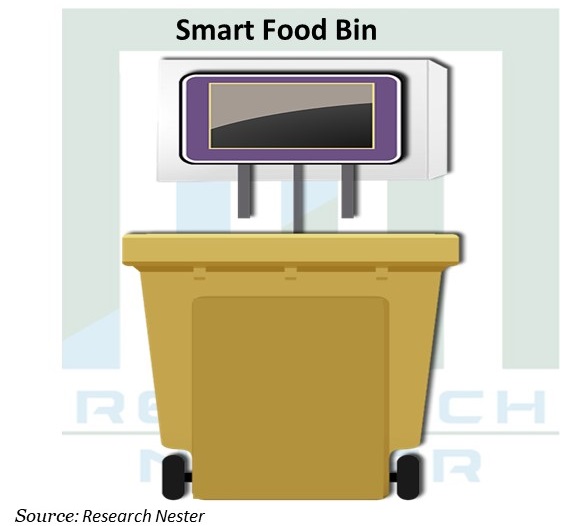 The global smart food bin market is predicted to grow at a healthy rate across the globe, owing to the fact that there is an awareness among individuals and businesses across various regions of the world about the significance of food loss and waste that imposes costs on regions economically as well as affect the environment. The individuals from all parts of the world are being educated to make them understand the importance of preventing wastage of food that is edible for consumption. The use of smart food bins would greatly benefit the individuals who deal with food on a regular basis, who can leverage this opportunity to optimize the quantity of food prepared. By this, they would be able to ensure that waste going to the landfill can be greatly minimized. This can help in reduction of greenhouse gas emissions considerably. According to Food & Agriculture Organization of the United Nations in a Concept Note released in the year 2017 in Rome, Italy, it had reported that every year at least 4.4 gigatonnes of greenhouse gas emissions were being released annually on account of food loss and waste. CLICK TO DOWNLOAD SAMPLE REPORT 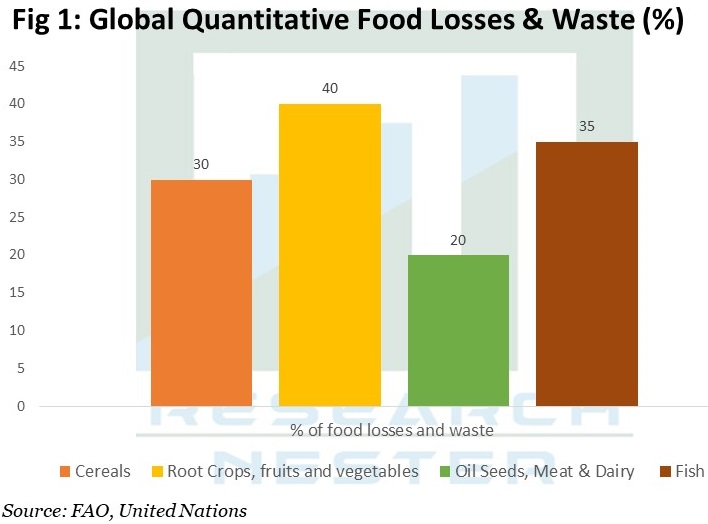 The smart food bin market is predicted to grow at a noteworthy CAGR over the forecast period i.e. (2020-2028). The market is segmented by food type, food, food waste and application. The food outlets and restaurants forming part of application segment are anticipated to register the highest market share, owing to the growth in the establishment of new restaurants and food outlets across the globe. This would mean that the restaurants and food outlets would be dealing with huge quantities of food waste, that arises from the fact that most of the consumers from all over the world have always refused to consume a portion of the food delivered to them at their table. According to Rethink Food Waste or ReFED, an organization comprising of a collaboration of more than 50 private, non-profit as well as leaders from the public sector who are committed to lowering food waste, the U.S. restaurant sector has been generating 11.4 million tons of food waste every year. About 7.3 million tons are being generated from full-service restaurants and about 4.1 million tons are being generated from limited-service restaurants. It has figured out a total cost that has exceeded USD 25 billion. It has also stated that restaurants can realize their profit potential to the tune of USD 620 million annually by adopting solutions such as Waste tracking and Analytics that can help them tackle the problem of food waste. By using these smart food bins, the restaurants would be able to optimize their orders, including being able to understand what the diners are actually enjoying by identifying the food that people do not consume and reduce the costs incurred by them on such food items. These are some vital factors that are predicted to raise the demand for smart food bins across several regions of the globe over the forecast period. 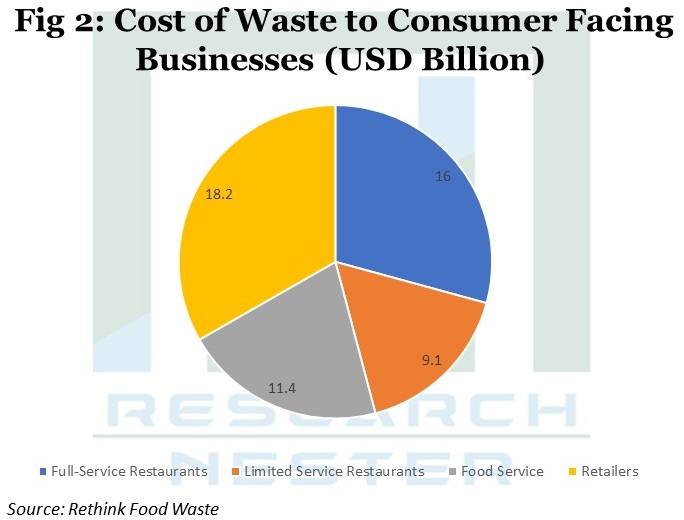 Food waste has become a global problem and many nations have been urged to take serious steps and action to reduce the problem of food waste that has been existing for a considerable period in several parts of the world. According to the Executive Director of United Nations Environment Programme, it was reported that food waste constituted an approximate cost of USD 990 billion annually. The United Nations had fixed a target for the countries that is laid out under Sustainable Development Goal 12 that states that there must be responsible consumption and production by nations and the goal is to lower the per capita food waste by half globally at both retail and consumer levels by 2030. All these factors are anticipated to drive the demand for smart food bins and are also estimated to drive the growth of the market over the forecast period. 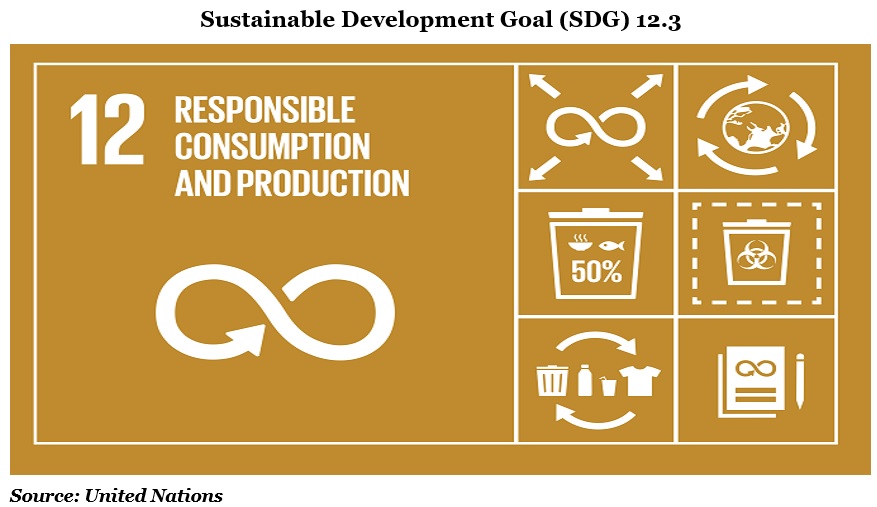 Many nations from various parts of the world have started raising awareness among their local population about the necessity to stop food from being wasted. The importance of protecting food from being wasted has been seen from not only an economic point of view, but also as a worrying trend that it could lead to depletion of natural resources causing scarcity of such resources in the environment. According to STREFOWA, a project initiated in the European Union to reduce and manage food waste in the European Union (EU), it was reported that at least 88 million tons of food are being wasted across the supply chain annually. Food loss and waste can occur at various stages of a food value chain such as agriculture, post-harvest, processing and other stages. Several efforts have been taken by governments from all over the world for preventing food waste. The government of United Kingdom had pledged a funding package of 15 million pounds to reduce food waste. The UK government has joined hands with businesses and other charity organizations by which it has aimed to bring down the quantity of edible surplus food that goes wasted every year. These factors are estimated to boost the demand for smart food bins from various regions across the globe and is estimated to drive the growth of the market over the forecast period. CLICK TO DOWNLOAD SAMPLE REPORT 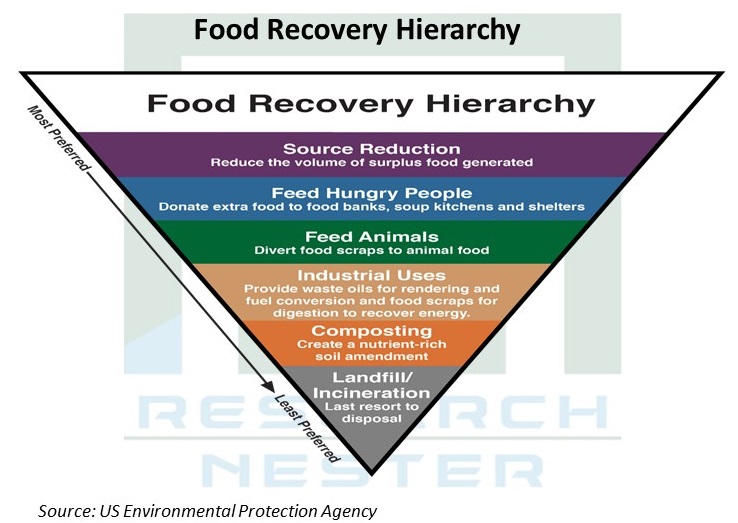 The smart food bin has the capacity to identify and segregate various forms of food waste individually, which would enable restaurants and food outlets optimize their food production accordingly. The various forms of food that are being disposed off will be identified by taking a picture of the food waste in the smart bin and subsequently the data related to the same will be fed into a computer for understanding what foods are being wasted and the percentage of food that is being wasted. This can help the restaurants and food outlets to optimize their food production in such a way that the food that is being prepared would be just sufficient to meet the needs of the consumers, thereby reducing the quantity of food that would be reaching the landfills ultimately. According to World Wide Fund for Nature (WWF), the amount of food wasted and ultimately reaching landfills can produce methane, which is a greenhouse gas that can cause greater harm than carbon-dioxide. As per a Report released by Restaurant Food Waste Action Guide (ReFed), it had estimated that about 52.4 million tons of food is being sent to the landfill. All these factors are anticipated to raise the demand for smart food bins among the global population and is also anticipated to drive the growth of the market over the forecast period.

The smart food bin market that is faced with tremendous potential for rapid growth may be subject to a few barriers such as low levels of awareness across several regions of the world, predominantly the markets in underdeveloped and developing nations who are still lagging behind in terms of technology. Additionally, with many nations across the globe still to initiate drastic steps to combat the fight against food waste is seen as a major challenge faced globally in mitigating food waste. According to Champions 12.3, only about 15 percent of the global population have acted fast to reduce food loss and waste.  Moreover, not a single nation has yet announced that it has managed to halve food loss and waste, that includes the absence of quantification nationally and is also restricting the tracking necessary to achieve the milestone. These factors are anticipated to operate as major restraints to the growth of the market over the forecast period.

On the basis of regional analysis, the global smart food bin market is segmented into five major regions including North America, Europe, Asia Pacific, Latin America and Middle East & Africa region. The markets in North America and Europe are predicted to register a significant market share, owing to the major presence of market players in these regions as well as steps taken by various governments for introduction of laws for dealing with food waste and recycling. The official figures released by FAO of the United Nations on per capita food waste occurred in Europe and North America was 95-115 kgs every year. According to World Hunger Education Service (WHES), several businesses and organizations in the United States had given a commitment publicly that they would work towards reduction of food waste by 50 percent in their operations by 2030. Moreover, according to Waste and Resources Action Programme (WRAP), a charity organization registered in the United Kingdom (UK), several businesses, trade organizations including local authorities who are a part of the Courtauld 2025 signatories in the United Kingdom have shown commitment to reduce food losses and waste. All these factors are anticipated to boost the demand for smart food bins in the regions of North America and Europe and are estimated to drive the growth of the market over the forecast period.

The global smart food bin market is further classified on the basis of region as follows:

PET Keg Market Segmentation By Capacity (10L-20L, 20L-30L and Others); By Application (Beer, Cider, Soft Drinks and Others) and By Distribution Channel (Online and Offline) – Global Industry Demand Analysis and Opportunity Assessment 2018-2027