Depending on the lifespan of the product, present condition, requirement for maintenance, the availability at decreased cost of product by 30-40% on average to its original price increases the attractiveness of the second hand furnishing accessories among the consumers in terms of monetary saving. People nowadays need cheaper furnishing items to save the startup cash for a business in the long run and with the increasing number of startups, it is expected to create a demand risk in the second hand furnishing market. Further, the global demand for the second hand home furnishing accessories is increasing due to massive growth of urbanization in developing countries generating a demand for durable and aesthetically appealing home furnishing goods within a limited budget. The global second hand home furnishing accessories market reached USD 4,923.0 Million in 2017 and is expected to garner USD 7,206.3 Million by the end of 2025 by registering a CAGR of 5.0% over the forecast period 2018-2025.

The global second hand home furnishing accessories market is segmented by regions into North America, Latin America, Europe, Asia-Pacific and Middle East and Africa, out of which, North America is slated to account for the second highest share by 2025 in the second hand home furnishing accessories market. The growth in the region can be attributed to easy availability of second hand goods along with changing consumer behavior as they can avail minimally used products at a much lower price to meet their furnishing needs.

Asia Pacific market has taken up the largest share in the market with 37.1% in the year 2017 and is predicted to expand with its dominant growth with a CAGR of 5.6% over the forecast period. This is primarily because of the high rate of urbanization in countries such as China & India where there is an increasing number of people adopting a contemporary lifestyle with aesthetically designed homes and interiors. Due to this, there is an increasing demand for the entire second hand home furnishing accessory products in this region as this provides them pocket friendly options for affordable luxury. Further, Europe market is expected to expand at a CAGR of 4.4% during the forecast period i.e. 2018-2025 and is expected to mark Y-o-Y growth rate of 4.9% in 2025. Germany is the prominent market driving the growth in the region. Moreover, the market of second hand home furnishing accessories in Germany is expected to achieve Y-o-Y growth rate of 5.6% in 2025 as compared to previous year. Also, the Middle East & Africa region is expected to show a reasonable growth while occupying a moderate market share in the year 2025.CLICK TO DOWNLOAD FREE SAMPLE 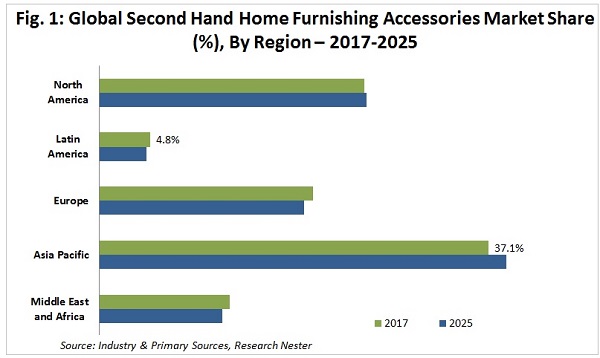 The global second hand home furnishing market is segmented on the basis of type into textiles, window coverings, lamps, kitchen products and others. Among these segments, the textiles segment occupies the largest market of second hand home furnishing across the globe and is anticipated to achieve absolute $ opportunity of USD 854.7 Million between 2018 and 2025. Further, the window coverings segment is expected to hold second largest market share over the forecast period owing to their higher durability and increasing consumer preference for these products due to the relatively lower hygiene constraints associated with their usage. 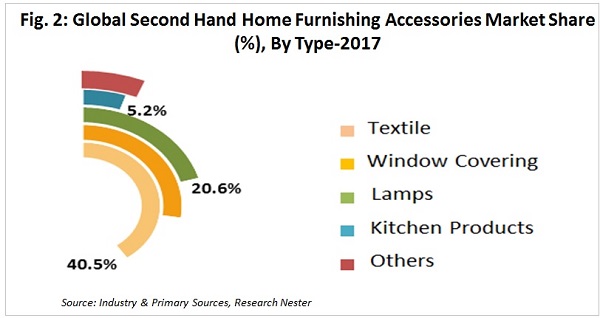 The global second hand home furnishing accessories market is divided by distribution channel into online stores and offline stores, out of which, the offline stores segment held the largest market share of 80.4% during the year 2017 and is further believed to hold its dominant stance over the forecast period. This is primarily due to the already existing presence of the thrift stores, pawn shops, consignment stores etc. across the globe where the consumers can personally inspect the product for damages prior to the purchase. However, the online stores segment is growing at a faster rate around the globe as they open a window of options for the consumers to select from the variety of products listed online. 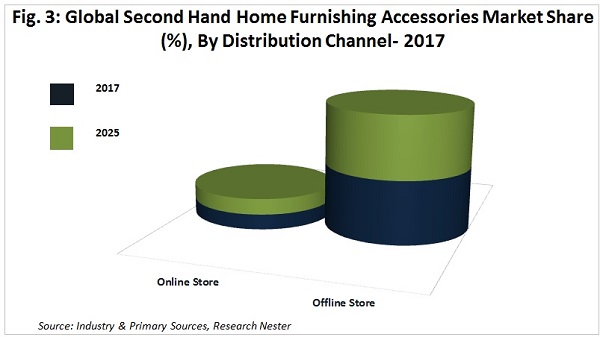 The used furniture is comparatively cheaper than the first hand furniture which allows the customer to buy two products at the worth of one because the used goods can be low-priced by 50% (or even more than that) as compared to the new alternative. This reduction in the prices of furniture is the major reason behind the customers’ preference towards the second hand furnishing market and hence, acts as an attractive factor behind the growth of the overall second hand home furnishing accessories market.

Further, the second hand furnishing market reduces waste and saves resources as used products do not require new resources that needs to be consumed, hence reducing the pollution that is produced while the manufacturing of the new products. Further, the second hand furniture is healthier to use, as cheap new furniture are often made of particle board that are held together by formaldehyde which is an acclaimed cancer causing substance. These factors also make the second-hand furnishing market more sustainable and attractive to the customers, thus allowing the market to grow rapidly.

An effective distribution channel can be the source of strategic benefit to the companies. The profitability by the distribution channels is one of the major factors that impact the market growth of the companies linked to it. Moreover, various key players are working towards the acquisitions to enhance the company’s portfolio along with accelerating and maximizing the opportunities in order to gain competitive edge in the global second hand home furnishing accessories market.