Factors such as growing need of appliances, rising presence of offline and online second hand shops coupled with rise in the income of lower and middle class segment are predicted to foster the demand for the second hand appliances in upcoming years.

Growth Highlights based upon Regional Platform during 2017 – 2025

The global second hand appliances market is segmented by regions into North America, Latin America, Europe, Asia-Pacific and Middle East and Africa, out of which, Asia Pacific dominated the overall market of second hand appliances with highest market share of around 35% in 2017 and is believed to expand with its dominant growth by the end of the 2025 by expanding at a the highest CAGR of 7.1% over the forecast period. After Asia-Pacific, the Europe second hand appliances market held the second highest market share in 2017 and is anticipated to achieve absolute $ opportunity of USD 1,115.4 Million between 2018-2025. Additionally, Europe Second Hand Appliances is expected to grow at a CAGR of 6.5% over the forecast period i.e. 2018-2025.CLICK TO DOWNLOAD FREE SAMPLE 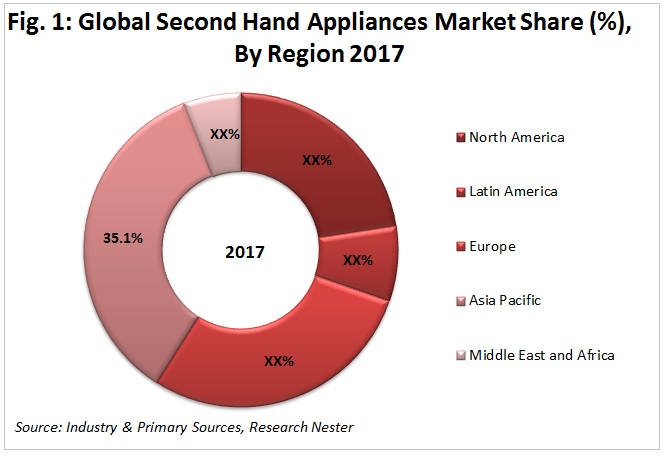 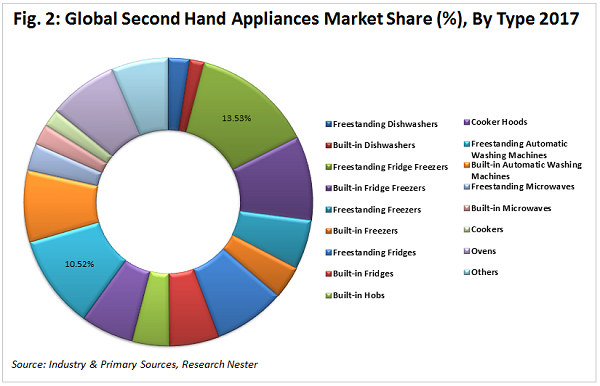 The global second hand appliances market is segmented by distribution channels into online stores and offline stores. The offline stores segment dominated the overall second hand appliances market by holding more than 80% of the total market share in 2017. The offline store segment is further estimated to dominate the market by crossing more than USD 8.5 Billion by the end of 2025. Moreover, the offline stores segment is expected to achieve Y-o-Y growth rate of 6.8% in 2025 as compared to previous year. Further, most of the market players of second hand appliances market are inclining towards online distribution channels to sell their products through online platforms. This strategy is allowing the companies to capture majority of the consumers and to expand their business in untapped markets. Factors such as these are estimated to benefit the expansion of the online store segment with highest CAGR of 9.5% over the period 2018-2025. 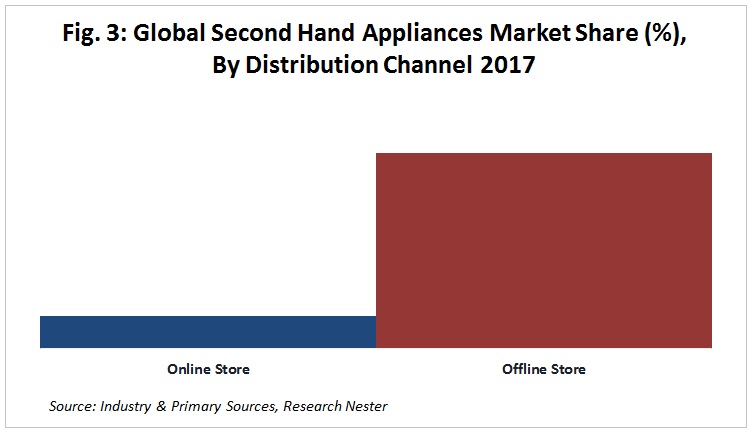 Consumers in developed countries are getting more aware towards potential of the second hand goods market and are looking forward to maximize their return on investment (ROI) by selling their used items at some reasonable price. Further, there is a presence of large number of stores that deal in second hand items such as home appliances, consumer goods, accessories and other used items. Such factors are expected to bolster the growth of the global second hand goods market in the near future.

The retailers of the second hand appliances market are working towards the expansion of their product portfolio along with working towards both of the distribution channels i.e. online and offline channels in order to capture majority of the consumers and to expand their business in untapped markets. Most of the market players of second hand appliances market are inclining towards online distribution channels to sell their products through the online platforms. As the trend of second hand goods hitting the market, it is expected that more and more ecommerce platforms will offer such used goods alongside brand new products.

The demand for used appliances is rising continuously with time. Consumers are more ready than ever to bring used appliances to their home at extreme low cost as compared to new alternatives. However, with the growth in the market for second hand appliances and other used goods, more and more used good retailers may enter into the previously owned goods market.