Rotomoulding, which is also known as rotational moulding, is a type of technique which is used to manufacture moulds of plastic without application of pressure. The end products are used to manufacture hollow articles, which makes rotomoulding one of the most cost-effective methods when compared to other methods. Low density polyethylene- based rotomoulding powder is used in extrusion coating applications, flexible packaging and moulding, whereas, high density polyethylene is used in woven sacks, heavy industrial packaging, blow moulding and others.

The demand for polyethylene in the packaging of various food as well as industrial products is rising rapidly. As the popularity of these products is growing owing to their low cost and high durability, it is becoming a preferred choice among many industries and end users. This powder is used in the manufacturing of plastic products such as automotive elements, plastic septic tanks, ornaments, plastic packaging products and others.

The global rotomoulding powder market is anticipated to record a robust CAGR throughout the forecast period, i.e., 2020-2028. The market is segmented by material into PVC plastisols, polycarbonate nylon polypropylene, polyethylene and others, out of which, the segment for polyethylene is anticipated to hold the largest market share owing to the growing demand of low density polyethylene, cross-linkable polyethylene, high density polyethylene and others for the manufacturing of products such as decorative articles, furniture, water tanks and others. This is expected to increase the market share of this segment in the upcoming years. 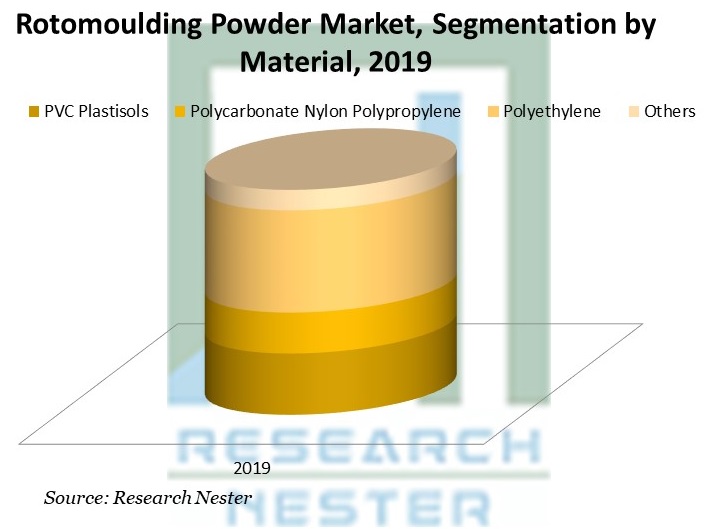 The demand for light weight vehicles in order to reduce the carbon footprint has been increasing from the past few years in the automotive industry. As the demand for light weight vehicles is rising across the world, automobile companies are being pressurized to use products which are made from polymers and plastics as compared to the products such as alloys and metals that were used in conventional designs. This factor is anticipated to lead to the growth of rotomoulding powder market in upcoming years.

Rotomoulding powders are used in the making of products such as showpieces, components, interiors and others. As the disposable income of people is rising across emerging economies, the demand for such type of products is likely to increase as well. This market is expected to benefit in a massive way from home interior and furniture industry, which in turn, is estimated to prove as a leading growth factor for the growth of rotomoulding powder market.

Rotomoulding powder is majorly manufactured from polyethylene. This is an economical method and at room temperature, there is an increase in the brittleness which decreases the time taken to mould the substance. Effective properties such as resistance to corrosion, crack resistance, high strengths, even when the temperature is low, and flexibility leads to the growth in the demand for polyethylene-based products which is projected to ultimately result in the growth  of the market for rotomoulding powder.

Strict regulations on the use of plastic materials

Rotomoulding powder is used to manufacture plastic moulds and it is further used for other applications such as plastic products in automobile industry, medical sector, transportation sector, manufacturing of storage tanks, cosmetics industry and others. Plastic products are one of the major contributors to landfills which lead to the damage of environment and due to this, many countries have restricted the use of plastic products or have implemented strict regulations which are predicted to ultimately limit the growth of rotomoulding powder market.

Increase in the overall manufacturing cost of rotomoulding powder

As there are strict regulations regarding disposal and recycle of plastic waste, it further adds to the manufacturing cost and increases the overall price of the powder. This factor is estimated to limit the growth of rotomoulding powder market in the upcoming years.

Our in-depth analysis of the rotomoulding powder market includes the following segments:

By End User on the basis of industry type

Asia Pacific is anticipated to hold the largest market share and is expected to continue as a leading revenue contributor region over the forecast period. Interior decorations, automotive and furniture are some of the industries that are growing in this region and rotomoulding powder are highly used in these types of industries, which in turn, will lead to grow the market of rotomoulding powder.

The rotomoulding powder market is further classified on the basis of region as follows: