RNA interference is a relatively new concept in the field of medicine. It is a process in which the ribonucleic acid inhibits translation or gene expression by converting single-stranded mRNA to double stranded RNA, thereby neutralizing the target nucleic acids. Two types of RNA are generally used in the RNA interference technique: small interfering RNAs (siRNAs) and MicroRNAs (miRNAs). The suppression of the target genes in human cells through RNAi technology allows the regulation of gene activity. This explains how the technique can be used as a gene therapy in order to treat various genetic diseases as well as infections associated with RNA.

The RNAi technology market is anticipated to record a CAGR of around 15% over the forecast period, i.e., 2019-2027. The market is segmented by therapy area, by application and by region, out of which, the therapy area segment is further segmented into cancer, liver disorders, respiratory disorders, neurological disorders, autoimmune disorders and others. Based on the therapy area, the cancer segment is anticipated to witness significantly high growth in the RNAi technology market on account of growing demand for better diagnostic and treatment methods for cancer. 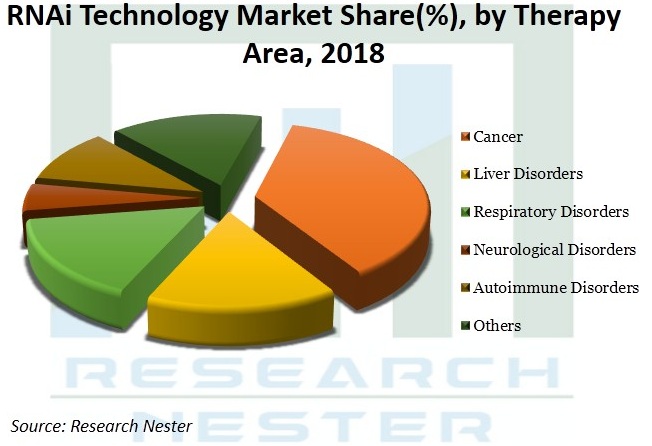 RNAi technology provides a targeted approach for cancer therapy which is desirable in order to receive precise treatment. Based on application, the market is segmented into drug discovery & development, therapeutics, drug delivery and others. The therapeutics segment is anticipated to grow as a result of a large number of advantages offered by the RNA interference technology in the field of medicine and therapeutics. CLICK TO DOWNLOAD SAMPLE REPORT

The National Cancer Institute estimated that around 1,735,350 new cases of cancer would be diagnosed in 2018 in the United States, and about 609,640 people were predicted to die from the disease.

Chemotherapy, despite being an effective cancer treatment, does not differentiate between normal and cancerous cells. The therapy causes harm to the normal cells that are close to the cancerous cells. On the back of this, the demand for RNAi technology for cancer therapy is estimated to grow at a significant rate over the forecast period. 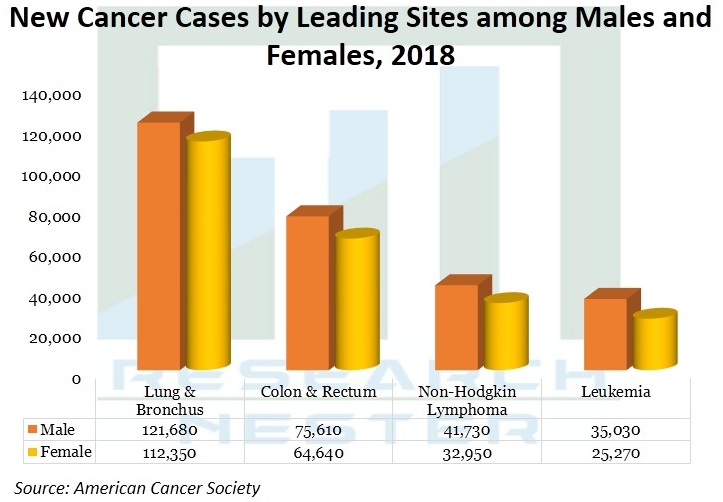 Advances in Medicine and Diagnostic Techniques to Boost the Market Growth

The rising demand for personalized medicine and for the production of therapeutics for several disorders including cancer, liver disorders, respiratory disorders and others is anticipated to become a major growth driving factor for the RNA interference technology market.

The strict government policies, regulations and FDA approvals for the therapies are estimated to hinder the market growth substantially. The process of receiving an approval takes a lot of time as well as money, which further is anticipated to act as a constraint for the market growth.

Our in-depth analysis of the RNAi technology market includes the following segments:

The market in North America is predicted to hold the leading share in RNAi technology market on account of rising prevalence of cancer, liver disorders, respiratory disorders and others in the region. According to the National Cancer Institute, an estimated 15,270 children and adolescents between the ages 0 and 19 in the United States were diagnosed with cancer in 2017. Out of these, 1,790 died from the disease. Moreover, the presence of leading companies in the United States that are involved in research and development of novel therapies for cancer treatment is further estimated to result in an augmented market growth. The market in Asia Pacific is anticipated to grow at the highest rate over the forecast period as a result of rising awareness among people about the risks related to these diseases as well as the growing funding by private and government organizations for the research and development of targeted drugs and therapies.

The RNAi technology market is further classified on the basis of region as follows: