Riot control is used by police, military or other security forces to control or arrest people involved in riots, protests and demonstrations. Riot can be spontaneous or planned. If it is spontaneous, it can be controlled by instructions in loud tone which can stop the people doing it and if it is planned, it can be controlled by using lethal weapons such as tear gas, pepper spray, rubber bullets and electric tasers.

Most of the riot control agents frequently use non-lethal weapons such as water cannons, police dogs, armored vehicles, aerial surveillance and long range acoustic devices to control the riot and protest while trying to avoid the use of lethal weapons. The control agents typically wear protective equipment such as riot helmet, body armors, gas masks, face visors and riot shields.

The market is observing vibrant growth on account of growing cases of hate crimes around the world. Increasing cases of political rivalry and disputes, rising terror attacks and communal violence in different nations is boosting the growth of the market. Communal violence is increasing on the back of rising discrimination due to religion, beliefs and class and growing number of rumors among others. Upgrading the law enforcement and defense sector is anticipated to affect the growth of the market.

The riot control system market is anticipated to record a CAGR of 6.2% over the forecast period i.e. 2019-2027. The market is segmented by product type into offensive and defensive weapons, out of which, the offensive weapons segment is expected to grow significantly on the back of advancement in technology and increasing demand for laser weapons around the globe. 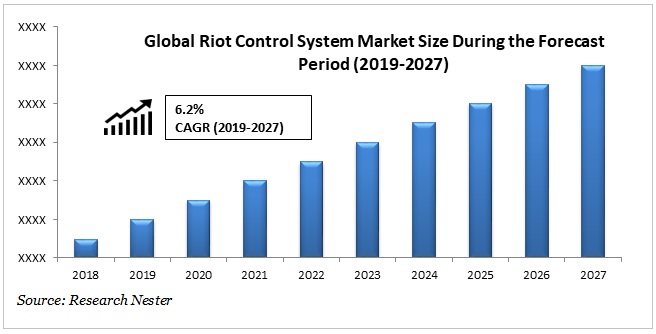 According to the data provided by Election Commission of India (ECI) in 2018, the number of political parties has increased twofold over the last decade. The increasing rate of population and rising competition among political parties to gain control and rule the nation is resulting in increased rivalry and disputes which is further expected to boost the growth of the market over the forecast period.

The demand for better riot control system is increasing due to rising number of terror attacks across different countries of the world. Additionally, the advancement in technology is honing the law enforcement system, leading to better defense services. These factors are supporting the growth of the market.

Rising cases of communal violence across various countries such as Syria, Nigeria, Iraq, India, Israel and others is resulting in large number of riots and protests due to increasing anger and insecurities among people. These factors are anticipated to boost the growth of the market over the forecast period.

On the back of ecological concerns as well as minimizing threat to human life, the presence of strict rules and regulations by government pertaining to the use of riot control system is expected to limit the growth of the market over the forecast period.

Asia-Pacific is expected to dominate the market on the back of increased funding by the government for military and law enforcement. Further, growing demand for non-lethal weapons such as water cannons, police dogs, armored vehicles and aerial surveillance is expected to boost the market growth in the region.

Further, North America and Europe is expected to have significant market share over the forecast period which can be attributed to growing technological advancements and increasing adoption of non-lethal weapons across the region.

The global riot control system market is further classified on the basis of region as follows: