Insulin is a hormone produced by the body in order to control the blood sugar levels. It maintains a low blood sugar by preventing accumulation of glucose in the blood. However, sometimes the body might lose the ability to produce insulin on its own. In such cases, insulin is required from an external source which is given to the patient in the form of intravenous infusions.

The condition caused due to a deficiency of insulin in the body is known as diabetes. Insulin is given to both adults and children suffering from diabetes by injecting the hormone directly into the bloodstream through the veins. Injecting insulin in this manner can be made safer for the patients if the concentration of insulin as well as the quantity is standardized, which reduces the medication errors.

Ready to use insulin for IV infusion provides a consistent and equal dosage of insulin to the patients with every administration, ensuring a faster delivery than alternate methods. It is provided in an urgent medical condition under medical supervision. The ready-to-use insulin can have a shelf life of a month under room temperature and up to 2 years when refrigerated. The longer shelf life of ready-to-use insulin allows it to be easily stored and used as per convenience.

The market for ready-to-use insulin for IV infusion is mainly driven by the growing number of incidences of diabetes among people of all age groups. Unhealthy dietary habits leading to obesity is another factor which is contributing to the growth of the market.

The ready-to-use insulin for intra venous (IV) infusion market is anticipated to grow at a significant CAGR over the forecast period i.e. 2019-2027. The market is segmented by end user into hospitals, home care and others, out of which, the home care segment is anticipated to hold leading share in the market on account of high prevalence of diabetes among people, mainly those belonging to the older age groups and their preference towards home care. This requires them to use insulin on a regular basis, thus increasing the demand for ready-to-use insulin for IV infusion. 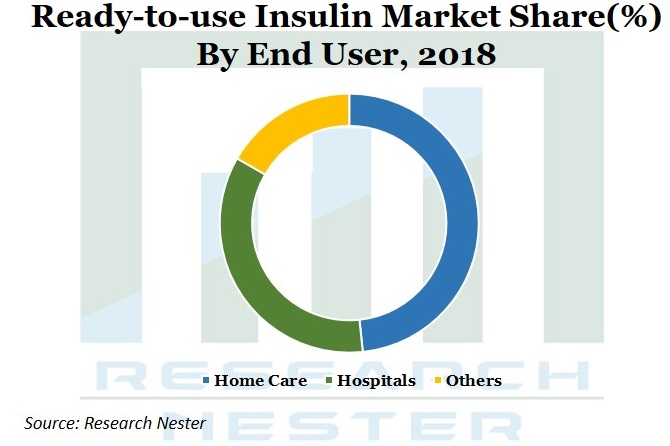 Increasing Cases of Obesity Around the World

An unhealthy diet and decreased physical activity among the majority of population are some of the contributing factors behind the growth of this market. The changing lifestyle of people has forced them to adopt unhealthy dietary habits, resulting in disorders such as obesity, which is a leading cause of diabetes. Injecting human insulin through external sources is the only medication for the stabilization and treatment of diabetes and related health conditions. According to W.H.O. (World Health Organization), diabetes was ranked as the seventh leading cause of death that resulted in 1.6 million deaths in 2016. The growing occurrence of diabetes around the globe is anticipated to hone the growth of the market in the coming years.

Faster Mode of Action of Insulin

Ready-to-use insulin, as the name suggests, does not require any preparation prior to use. It can be directly injected into the veins without the addition of any other drug to it. This allows an easy administration of insulin into the body which can be done even at home care facilities under medical supervision.

The high demand for new variants of insulin in the market has led to an expansion of research and development activities in this sector. The leading pharmaceutical companies are being involved in the development and production of such drugs, especially in regions such as North America and the Asia-Pacific. Therefore, a rise in the advancement of the healthcare industry is anticipated to boost the growth of the market.

Time Taken For Approval of Drugs

The approval of drugs requires time and money, which poses as a key restraint to the market growth. An increase in investments, research and development activities in the pharmaceutical sector is required in order to develop and approve the sale of these drugs in the market.

On the back of growing number of diabetic patients, the market in North America is anticipated to exhibit maximum growth during the forecast period. According to a report by Centers for Disease Control and Prevention (CDC), the adults living with diabetes or prediabetes is more than 100 million in the U.S. Additionally, the increasing number of hospitals and home care in North America is another factor leading to the growth of this market. This growth is closely trailed by the Asia-Pacific region owing to the rapid development in the healthcare industry combined with increased funding in the pharmaceutical sector.

The ready-to-use insulin for intra venous (IV) infusion market is further classified on the basis of region as follows: