Extensive insights into the Growth of Radiotherapy Market amidst COVID-19

Radiotherapy is also known as radiation therapy in which high doses of radiation are used for cancer treatment, either by killing the cancer (malignant) cells or for tumor shrinking. It uses x-rays or specific electrons for disease treatment and has its applications in the treatment of early stage Dupuytren's disease and Ledderhose disease as well. This therapy can be used in either controlling or killing of the malignant cells as part of cancer treatment. These applications of radiotherapy are expected to propel the growth of the global radiotherapy market considerably over the forecast period i.e. 2019-2027.

Asia Pacific is expected to drive demand and positively impact the growth of the market on account of increasing health expenditure across the countries such as India, China, Japan and others along with a high prevalence rate of cancer across the region. According to the reports of WHO, 57.3% of the cancer deaths were reported across Asia in 2018.

On the back increasing Cancer Population

Rising number of present as well as geriatric population suffering from various types of cancers has been on a rise. The WHO reported that cancer was the second leading cause of death around the globe with an estimated 9.6 million deaths over the year 2018. It is estimated that around 1 in 6 deaths globally, occurs due to cancer. The International Agency for Research on Cancer (IARC) estimated that the global cancer burden rose to 18.1 million new cases in the year 2018. This rise in the number of cancer cases have been primarily attributed to the changing prevalence of certain causes of cancer linked to social and economic development in rapidly growing economies. The WHO reported that the lung cancer and the female breast cancer were the leading types of cancer in terms of the number of new cases around the world; with approximately 2.1 million diagnoses estimated in 2018, contributing about 11.6% of the total cancer incidence burden. Colorectal cancer with 10.2% of the total cases is the third most commonly diagnosed cancer, prostate cancer as the fourth and stomach cancer as the fifth most identified type of cancer around the world. This increase in the prevalence rate of different types of cancers is estimated to boost the growth of the radiotherapy market over the forecast period.

The applications of radiotherapy as palliative therapy to shrink the size of tumor, for primary cancer treatment as well as for adjuvant therapy after chemotherapy or surgery are expanding. These applications are estimated to sturdily drive the market during the forecast period. Additionally, the use of radiotherapy in immunotherapy, in combination with surgery and chemotherapy are attributed to push the market robustly across the globe.  Moreover, according to the statistics of the year 2015 by the Global Health Observatory (GHO), the number of premature deaths due to cancer is anticipated to surge by 2030 by 44%. This rise in number is estimated to increase the demand for radiotherapy over the forecast period.

However, the side effects of radiation therapy can range from dry mouth, mouth and gum sores, difficulty while swallowing, stiffness in the jaw, nausea, hair loss to diarrhea, rectal bleeding, lowered sperm counts, changes in menstruation, infertility and others. Thus, the probability of such mild to serious health side effects caused by radiotherapy are estimated to reduce its rate of adoption during the forecast period, serving as a restraining factor behind the growth of the market.

Global radiotherapy market is further classified on the basis of region as follows: 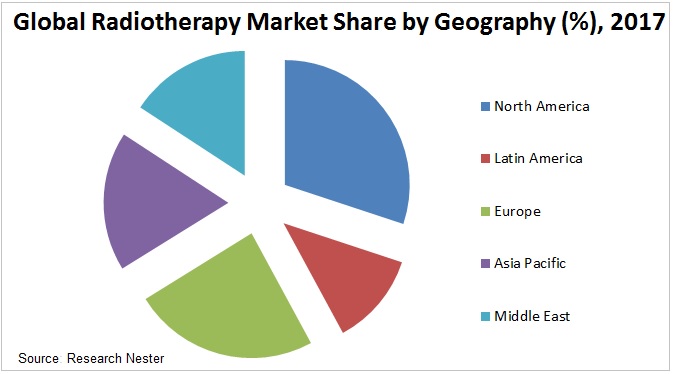