The global programmable LED drivers market is estimated to garner a revenue of ~USD7 billion by the end of 2031 by growing at a CAGR of ~27% over the forecast period, i.e., 2022 – 2031. Further, the market generated a revenue of ~USD 79 billion in the year 2021. The growth of the market can primarily be attributed to the increasing consumption of electricity worldwide.According to the International Energy Agency, in the year 2019, world total final consumption of electricity was estimated to be ~80.2 EJ. 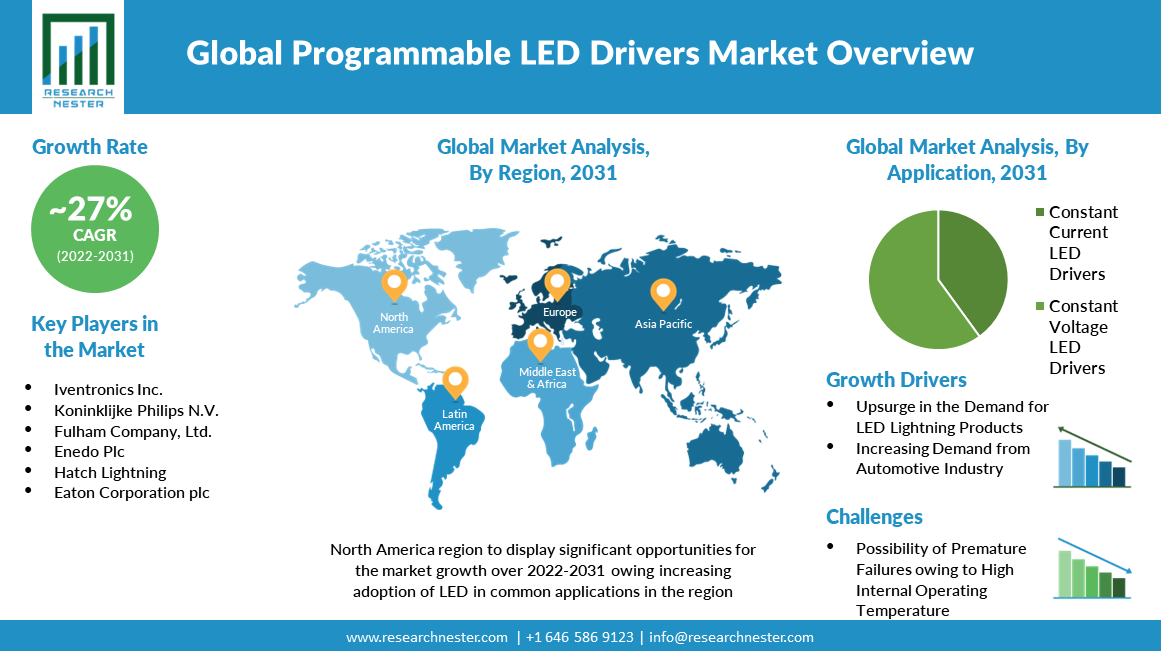 The characteristic ofprogrammable LED drivers to provide self- contained power supply to LED modules for optimal light output, dimming curve, and lowest dimming percentage, allowing the driver to match the output of existing luminaires or serve as a flexible platform for new luminaire designs with low energy consumption are responsible for its increasing market demand. The requirement for specialized power supplies is completely looked after by the LED drivers with different currents in different applications and requiring different intensities. The surge in the use of LED bulbs and LED lightings is attributed to its benefits such as low energy consumption, greater efficiency, longer lifespan, design flexibility, and the ability to operate in harsh conditions. The demand for programmable LED drivers is on the rise amongst the building sector, which in turn, is expected to create massive revenue generation opportunities for the key players operating in the global programmable LED drivers market during the forecast period.For instance, in the year 2021, approximately 50% of buildings sector lighting markets were covered by LEDs globally.

Theglobal programmable LED driversmarket is segmented and analyzed for demand and supplyby driver type into constant current LED drivers and constant voltage LED drivers. Out of these segments, constant voltage LED drivers segment is anticipated to garner the largest revenue by the end of 2031, backed by the growing number of hotels using LEDs and curb the carbon emission level worldwide. For instance, the hotel industry is expected to reduce carbon emissions by 66% and 90% by 2030 and 2050, respectively, in order to keep global warming below the 2°C threshold agreed upon in the 2016 Paris Agreement. To produce the same amount of light, LED lighting consumes ~40% less power than fluorescents, and 80% less power than incandescent bulbs.

Regionally, the global programmable LED driversmarket is studied into five major regions including North America, Europe, Asia Pacific, Latin America and Middle East & Africa region. Amongst these, the market in North America is projected to hold the largest market share by the end of 2031, backed by the increasing adoption of LEDs in common applications in the region.According to the U. S. Department of Energy, Office of Energy Efficiency and Renewable Energy statistics, from 2016 to 2018, approximately 2,325 million units LED products installations were recorded in various applications, uplifting LED penetration to 30% of all general illumination lighting in the United States. 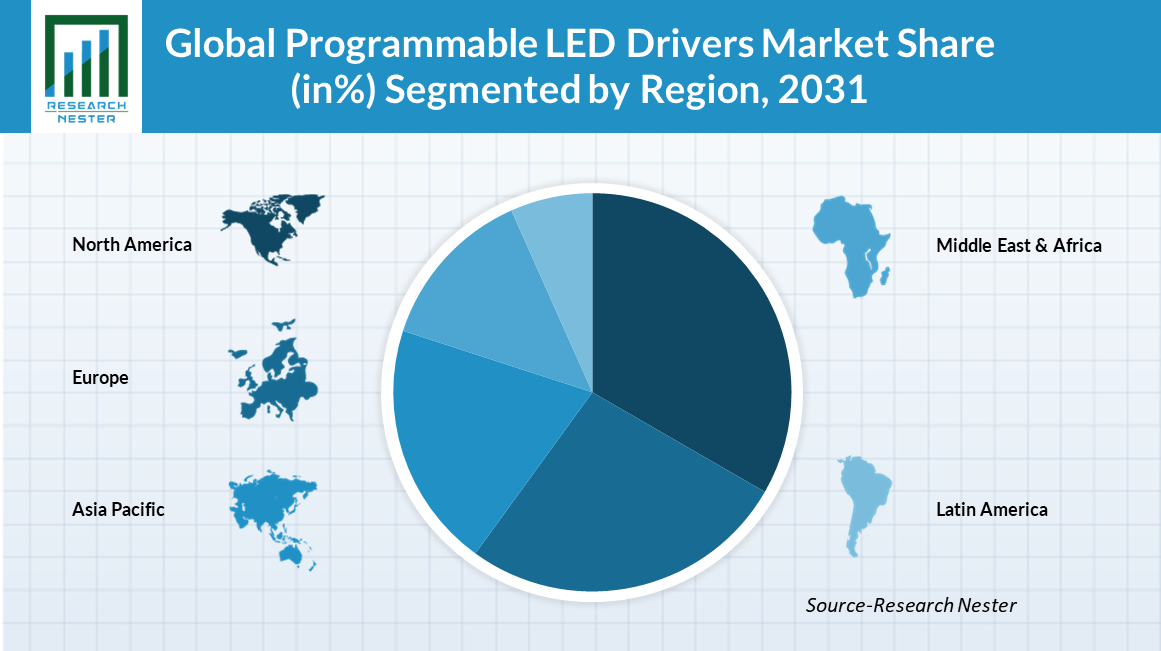 The global programmable LED drivers market is further classified on the basis of region as follows:

Our in-depth analysis of the global programmable LED driversmarket includes the following segments:

What are the major factors driving the growth of the programmable led drivers market?

Rising total consumption of electricity, upsurge in the demand for LED lightning products, increasing demand from automotive and building sectors are some of the major factors anticipated to drive the growth of the market.

What would be the CAGR of programmable led drivers market over the forecast period?

What are the challenges affecting the programmable led drivers market growth?

Possibility of premature failures of LED drivers owing to high internal operating temperature are some of the factors estimated to hamper the market growth.

Which region will provide more business opportunities for growth of programmable led drivers market in future?

Who are the major players dominating the programmable led drivers market?

What are the segments in the programmable LED drivers market?

The market is segmented by driver type, power level, application and by region.

The constant voltage LED driver is anticipated to garner the largest market size by the end of 2031 and display significant growth opportunities.