Renting the power on temporary basis is called power rental. Process of producing electricity with the help of turbine which generates the steam by burning of fossil fuels such as coal, oil & gas produces the electric current which is provided to the various industries for running their operations.

Mostly the power required in industries like oil/gas, power infra and the construction companies for lifting heavy machines the diesel generators are used for processing their operations.

Power rental can be used for supplying high amount of power or energy in critical operations to perform heavy operations like construction of dams and highways. Power renting can be used as a stand by for providing power as a safety to avoid the interruption in the operation.

The global power rental market is segmented on the basis of region into North America, Asia-Pacific, Latin America, Europe, Middle East and Africa. Asia- Pacific is anticipated to be the fastest developing region for the global power rental market on the account of rapid expansion of the infrastructures, oil/gas sector and factories in India and China. The growing demand for energy in oil and gas industry for drilling and exploratory operations that requires more power for their process is also anticipated to drive the market growth of the Asia Pacific region during the forecast period.

Our in-depth analysis segmented the global power rental market in the following segments:

Global power rental market is further classified on the basis of region as follows: 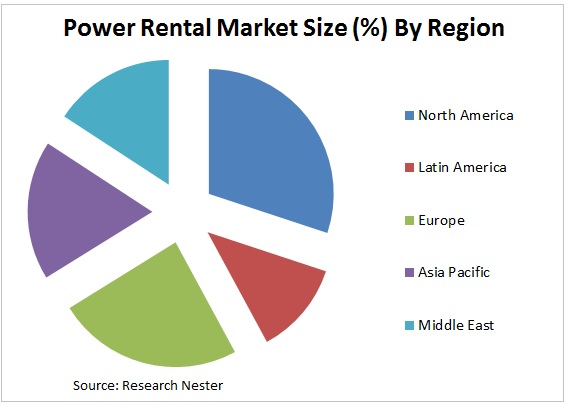 According to the Indian Ministry of Statistics and Programme Implementation the utilization of different sources of energy in India is 1,001,132 MW in total renewable power generation, 21,134 MW in Hydro power potential, 649,342 MW in Solar Power Potential and 302,251 MW in  wind power potential. The high utilization is expected to result in an increasing demand for power generation. Such factors account to an increasing requirement for power rental services.

There is a high requirement for continues supply of electricity in urban and rural areas to carry out various critical operations within industries such as oil & gas, construction and infrastructure development which are often not met by the regular supply. Also, increasing mining activities are also resulting in an increased demand for power rental services. Therefore, there is an increasing demand for power in rent from power rental companies.

However, unfavorable government regulations that restrict the usage of conventional energy resources due to factors such as carbon dioxide emission, loss of eddy currents and hysteresis loss, are resulting for decline in the demand for power renting.