The global portable generator market is estimated to grow with a moderate CAGR during the forecast period, i.e., 2022-2030.  One of the major factors attributing the market growth is the aging grid infrastructure. Transmission systems that are not upgraded or maintained properly cannot sustain an additional burden of power as they generally collapse, causing the power outage, which is anticipated to drive the market growth. Growing electricity demand positively affects the market as power grids are not able to take the load, leading to frequent power cuts. According to the IEA, in 2018 the global electricity demand grew by 4% to more than 23,000 TWh. Growing investments in backup power solutions, along with growing consumer awareness for preparing for emergency, is expected to further favour market growth. Moreover, Rapid adoption of dual fuel and inverter portable generators, and extreme weather conditions are estimated to further boost the market growth. Market growth can also be attributed to factor such as rising concerns overpower stability for uninterrupted business operations during natural calamities. However, COVID-19 has negatively impacted the growth of the portable generator due to strict guidelines by the government to put a halt on non-essential services. 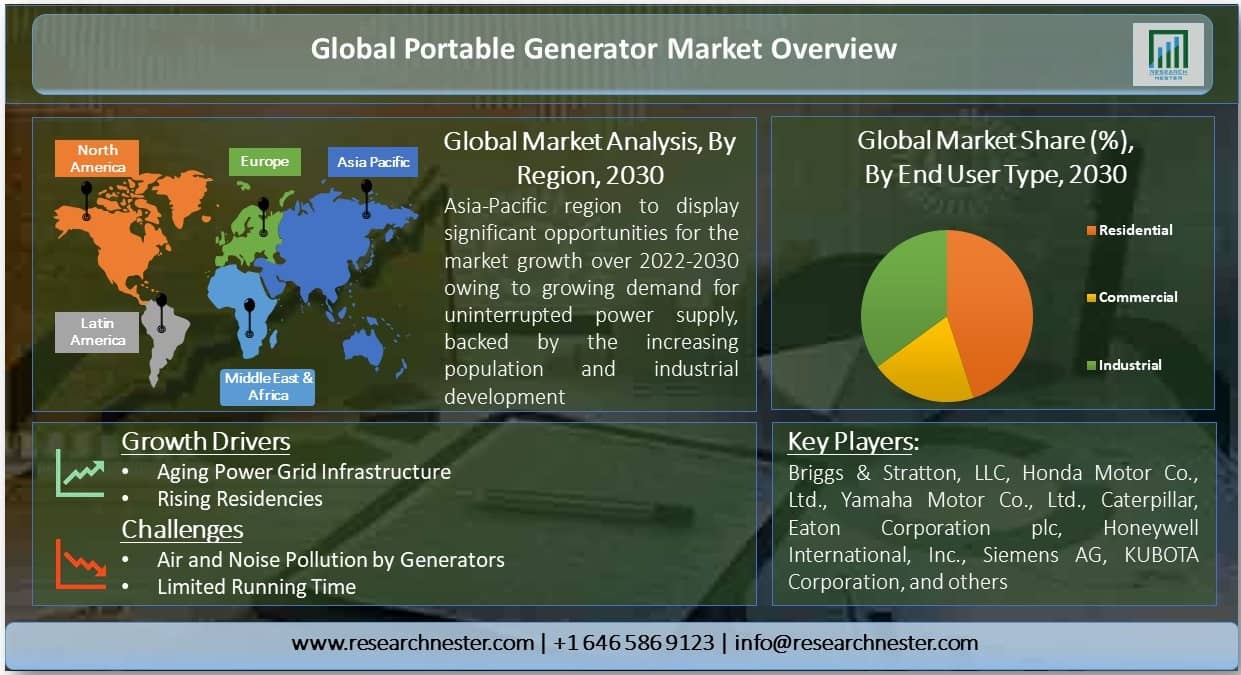 Based on fuel type, the market is segmented into gasoline, diesel, natural gas, and others. Among all, the gasoline segment holds the highest share in the market throughout the forecast period, as they are easily available, run for a longer period of time, produce less noise, and produces less harmful carbon dioxide fumes. On the basis of application, the market is segmented into prime/continuous and emergency. Out of these, the emergency segment holds the highest share over the forecast period, as generators have a running limit of 10-12 hours only. Emergency portable generators are basically used when natural calamities such as heatwaves, storms, and heavy rains, disrupt the distribution infrastructure and transmission. This is why the segment is anticipated to garner the higher share. The market is segmented on the basis of power into below 5kW, 5-10kW, and 10-20kW. Out of all, 5-10Kw holds a significant share during the forecast period, due to increasing awareness of in-house power backup and the growing demand for portable powering systems in outdoor recreational activities. CLICK TO DOWNLOAD SAMPLE REPORT

Geographically, the market is segmented into North America, Latin America, Europe, Asia Pacific, and the Middle East & Africa region. The market in the Asia Pacific is predicted to grow at the highest CAGR over the forecast period owing to the growing economy, and technological advancement, within the region. Rising urbanisation and industrialization is also expected to boost the market growth. Moreover, various government initiatives for the growth residential sector in countries, such as, India and China, are estimated to boost the market growth. For instance, under the Pradhan Mantri Awas Yojana in India, central government is planning to build 20 million affordable houses in urban areas across the country. This is projected to increase the demand for portable generators amongst the households in such cities, which is expected to fuel the market growth. Furthermore, in 2021, the market in North America is evaluated to occupy the largest share in terms of revenue, owing to the rapid adoption of the advanced technology, accompanied by the presence of top key players in the region. Power outages, high peak time electricity costs, and penetration of the natural gas network are expected to boost the portable generator market in this region. Increasing intensity & frequency of weather-related disasters and aging grid infrastructure is further expected to boost the market growth. 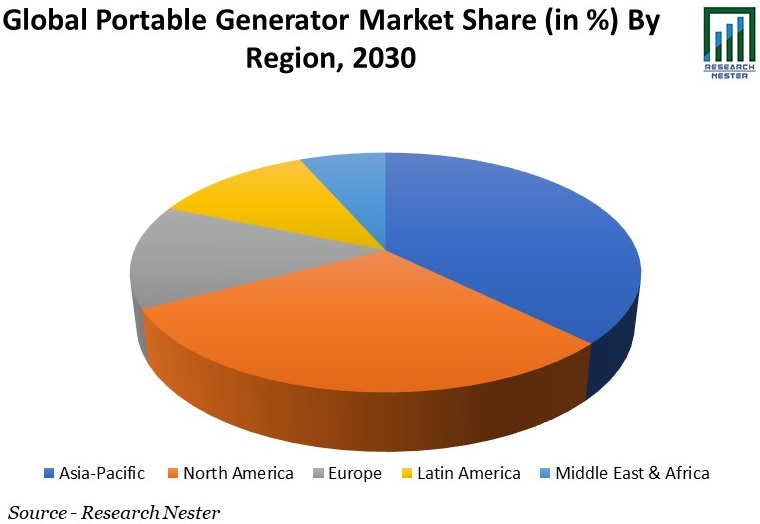 The global portable generator market is further classified on the basis of region as follows:

Our in-depth analysis of the global portable generator market includes the following segments:

What are the major factors driving the growth of the portable generator market?

Rise in issues of power cut, increasing industrialization and urbanization and advancement in technology are the key factors driving market growth.

What would be the CAGR of portable generator market over the forecast period?

What are the challenges affecting the portable generator market growth?

Limited running time and air and noise pollution caused by these generators are the factors that may hamper market growth.

Which region will provide more business opportunities for growth of portable generator market in future?

The market in Asia Pacific region will provide ample growth opportunities owing to the technological advancement, and high demand for power, backed by the large population.

Who are the major players dominating the portable generator market?

What are the segments in the global portable generator market?

The market is segmented by fuel type, end user, application, by power and region.

Which segment under the end-user segment captures the largest market size in the global portable generator market?

With respect to end user, residential holds the highest share in the market over the forecast period, owing to the increasing establishment of residencies.