In April 2017, Millendo Therapeutics, Inc., a biopharmaceutical company in its clinical stage, announced the publication of positive data which came from a Phase 2 clinical trial of MLE4901, which was used for the treatment of menopausal vasomotor symptoms (VMS) which affect a large majority of menopausal women. In addition to this, the company planned to continue the Phase 2b clinical program of MLE4901 for polycystic ovary syndrome (PCOS).

Polycystic ovary syndrome is a hormonal condition in women characterized by the formation of multiple cysts in the ovaries. PCOS particularly occurs among women who are of the reproductive age. These cysts might obstruct the process of ovulation and lead to infertility among the affected women. Currently, no specific drug for the treatment of PCOS is available in the market. However, various drugs that control the hormones in the body can be used in order to restrict any further cyst growths in the ovary.

The polycystic ovary syndrome treatment market is anticipated to record a CAGR of around 5% over the forecast period, i.e., 2019-2027. The market is segmented by drugs, by surgery, by distribution channel and by region, out of which, the drugs segment is further segmented into oral contraceptives, insulin-sensitizing drugs, antidepressants, anti-androgen drugs and others. Based on drugs, the insulin-sensitizing drugs is anticipated to hold the largest share in the polycystic ovary syndrome treatment market on account of higher demand of anti-diabetic drugs that decrease the hormone levels, thereby controlling PCOS as well as diabetes. Since androgens are secreted in excess in this disorder, the levels of insulin in the body are affected which eventually leads to diabetes. Further, insulin-sensitizing drugs prevent the onset of diabetes that might result from PCOS which is further estimated to raise the demand for this segment. The oral contraceptives segment is estimated to grow at the highest rate as a result of easy availability of these medications at online and offline pharmacies. Contraceptives are used in order to treat the common symptoms of PCOS such as to provide relief from menstrual pain and treat irregular menstrual cycles, which is further anticipated to raise the demand for this segment in the upcoming years. 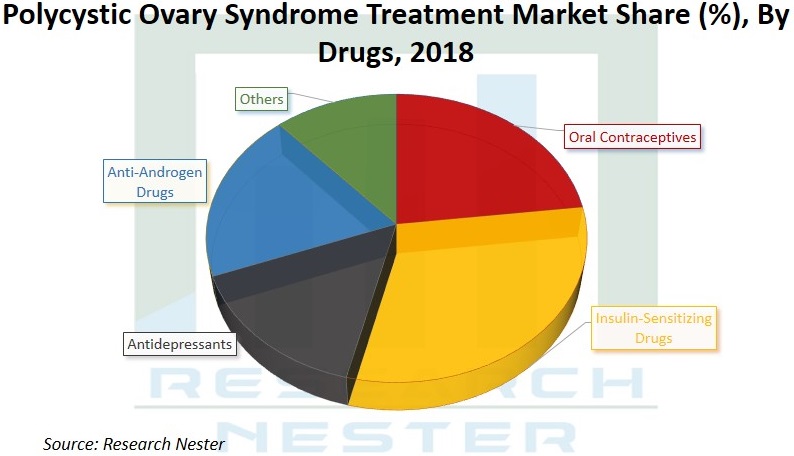 The various risks to the health of women, especially to the reproductive health, that result from polycystic ovary syndrome are increasing the awareness among women for the prevention of this disorder. PCOS is a common cause of infertility among women, affecting about 6% to 12% of females, i.e., around 5 million women in the United States, as reported by Centers for Disease Control and Prevention. The rising understanding about PCOS results in a greater knowledge and better diagnosis of the symptoms of this disorder including irregular or no menstruation, excessive growth of hair, weight gain, acne and irregular ovulation.CLICK TO DOWNLOAD SAMPLE REPORT

PCOS leads to the development of various disorders including diabetes, heart diseases and several other hormone related disorders. The serious health disorders linked with polycystic ovary syndrome result in a greater requirement for the elimination of this disorder, which is estimated to significantly propel the market growth.

Lack of Availability of Proper Medication to Hamper the Market Growth

As there is no known cause of polycystic ovary syndrome, the drugs available for the treatment are not highly accurate. Moreover, the drugs change the hormone levels in the body which further increases the side effects including body weight gain or loss, irregular menstruation, bloating and others. These factors are estimated to hinder the growth of PCOS treatment market over the forecast period.

The largest share in the polycystic ovary syndrome market is anticipated to be held by the market in North America on account of higher number of cases of PCOS diagnosed in the region. Moreover, the incidence of this disorder among women was reported to be higher as a result of better medical facilities and increasing awareness among women. The presence of key players in the market in this region is an additional factor estimated to contribute towards the market growth. The market in Asia Pacific, however, is anticipated to observe the highest rate of growth during the forecast period on account of greater population that gives rise to more cases of polycystic ovary syndrome, mainly in regions of China and India.

The polycystic ovary syndrome treatment market is further classified on the basis of region as follows: