The global plastic compounding market is estimated to garner a large amount of revenue by growing at a CAGR of ~5% over the forecast period, i.e., 2022 – 2030. The growth of the market can be attributed primarily to the growing substitution for materials such as wood, glass, metals, concrete and natural rubber. Furthermore, robust growth of industrialization, rising per capita income in developing nations, and growing production of electric vehicles over the last few years are also projected to drive market growth in the near future. According to the World Bank, the per capita income of the world increased up to USD 9,483.844 in the year 2019. The same values were calculated to be USD 8,394 and USD 1,822 for China and India respectively. In addition, increasing demand for plastic as a result of its benefits such as ability to form the desired shape and ease of molding, is expected to offer ample growth opportunities to the market in the upcoming years. 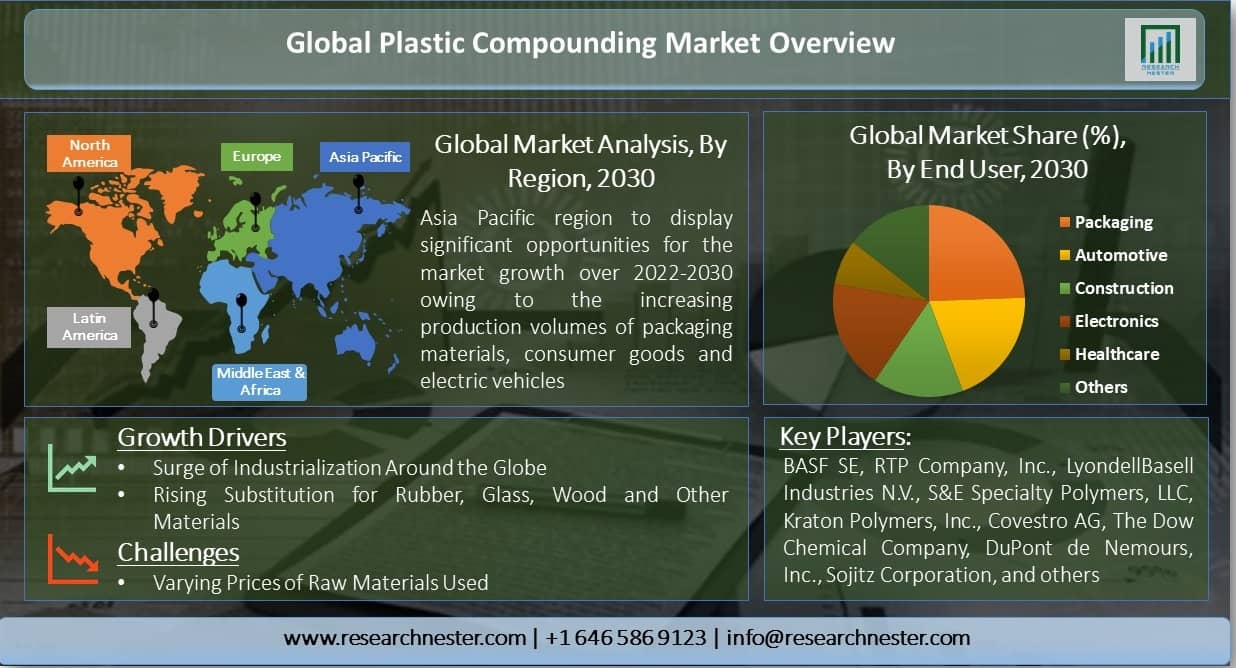 The market is segmented by polymer type into thermoplastic polymers, thermosetting polymers, and thermoplastic elastomers, out of which, the segment for thermoplastic polymers is anticipated to hold the largest share in the global plastic compounding market on account of their growing usage in automobile industry owing to exceptional serviceability and high impact resistance. Additionally, on the basis of the end user, the automotive segment is evaluated to occupy the largest market share during the forecast period owing to the increasing usage of plastics in the place of metal and alloys in automotive components. Along with this, growing production of vehicles in emerging economies, namely China, India and Brazil, is also assessed to boost the growth of this market segment in the future. For instance, in 2019, more than 25 million units of automobiles were produced in China, out of which more than 20 million units belonged to passenger cars.

On the basis of geographical analysis, the global plastic compounding market is segmented into five major regions including North America, Europe, Asia Pacific, Latin America and Middle East & Africa region. The market in the Asia Pacific is estimated to gather the largest share and witness noteworthy growth over the forecast period on the back of the rising manufacturing of electric vehicles, and large production volumes of packaging materials, electrical products and consumer goods in the region. In 2020, 7% of the total vehicles sold in China were electric, which is evaluated to reach up to almost 40% by the end of 2030. Apart from these, growing number of commercial and residential projects in China and India is also expected to lead to the expansion of the region’s market in the near future. Moreover, the market in Europe is also predicted to occupy significant share during the forecast period, which can be credited to the increasing emphasis by government agencies on developing sustainable technologies for plastic compounding in the region.

The global plastic compounding market is further classified on the basis of region as follows:

Our in-depth analysis of the global plastic compounding market includes the following segments:

What are the major factors driving the growth of the plastic compounding market?

The major growth drivers for the market are growing substitution for glass, wood, metal and other materials and rapid growth of industrialization globally.

What would be the CAGR of plastic compounding market over the forecast period?

What are the challenges affecting the plastic compounding market growth?

Fluctuating prices of raw materials used in plastic compounding is estimated to hamper the market growth.

Which region will provide more business opportunities for growth of plastic compounding market in future?

Asia Pacific will provide more business opportunities for the market owing to the rising manufacturing of electric vehicles and large production volumes of various materials in the region.

Who are the major players dominating the plastic compounding market?

What are the segments in the plastic compounding market?

The market is segmented by polymer type, end user, and by regions.

Which segment captures the largest market size in the end user segment in the plastic compounding market?

The automotive segment is anticipated to hold largest market size and is estimated to grow at a notable CAGR over the forecast period and display significant growth opportunities.