Piezoelectric actuators are the devices which are used to convert an electrical signal into a small displacement, also known as a stroke. These actuators are used for operating as a special purpose motor and for controlling the hydraulic valves along with several other applications that require any sort of precise movement control such as fine adjustment of machining tools, lenses and other equipment. These devices convert electrical energy into mechanical stress using the piezoelectric effect. As a result of various benefits offered by piezoelectric actuators such as greater reliability and cost-effectiveness, the demand for piezoelectric actuator is anticipated to witness significant growth in future.

Based on geography, the market for piezoelectric actuators is segmented into North America, Europe, Asia Pacific, Latin America and Middle East & Africa. Out of these, the market in Asia Pacific held the largest market share of 48.25% in 2018 and is further predicted to continue holding the leading share in the market by 2027. The growth in market in this region is predicted to be on account of presence of emerging economies such as India, Japan and China. These countries are projected to account for a significant market share owing to the increasing usage of consumer electronics, growing digitization and rising information & communication technologies. The market in Europe is witnessing substantial growth as a result of rising customer priority along with increasing acceptance of piezoelectric technology in the region. Piezoelectric actuators market in this region is anticipated to reach up to a market value of USD 5,531.5 million by 2027 and grow at a significantly high CAGR during the forecast period. The market in North America is predicted to witness moderate growth in the piezoelectric actuator market over the forecast period owing to the technological advancements coupled with the growing demand for the product in the consumer electronics and healthcare sector within this region. CLICK TO DOWNLOAD SAMPLE REPORT 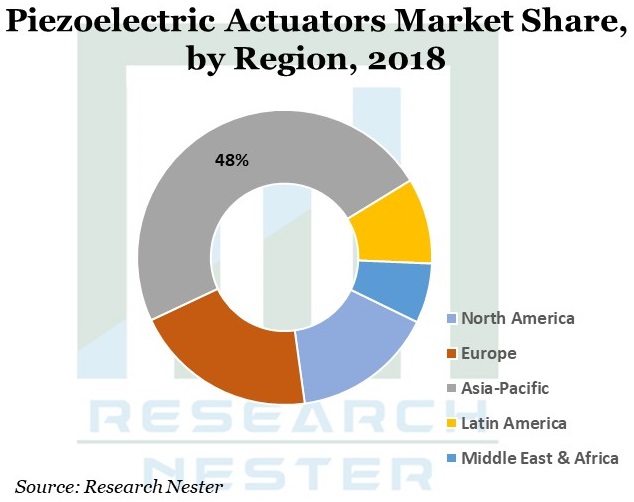 On the basis of product, the piezoelectric actuators market is segmented into stack actuator, stripe actuator, tube actuator, shear actuator and linear motor. The segment for stack actuators is estimated to hold the leading share in the market during the forecast period. This segment accounted for a market value of USD 4,962.5 million in 2018 and is anticipated to further grow at a significant rate by 2027. Stack actuator segment is further segmented into discrete stack and co-fired multilayer stack actuators. A stack piezoelectric actuator offers high blocking force along with a low stroke. The operating voltage of discrete stacks is in the range of 500-1000V, while co-fired has an operating voltage of up to 200V. 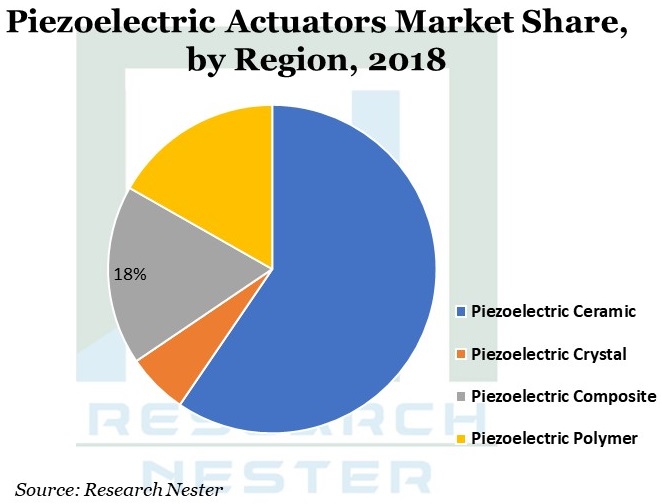 Piezoelectric actuators have a large number of applications in various industries. However, these devices face few challenges in the market. Piezoelectric actuators require high voltage for proper functioning and they cover a relatively shorter distance, resulting in an increase in overall cost of the operations. Another major challenge faced by the piezoelectric actuator market is the difficulty in management of humidity and high risk of short circuit. The risk of cross contact between the multiple layers of the actuator increases due to rise in humidity. On the back of these factors, the market is predicted to observe restricted growth in coming years.

1) What are the major factors driving the growth of the Piezoelectric Actuator market?

Ans: Increasing demand for consumer goods, growing need for compact and smaller electronic parts as well as greater reliability and cost-effectiveness are growth driving factors for the market.

2) What would be the CAGR of Piezoelectric Actuator market over the forecast period?

4) Which region will provide more business opportunities for growth of Piezoelectric Actuator market in future?

5) Who are the major players dominating the Piezoelectric Actuator market?