Static information system is used traditionally and is available in printed formats, such as route network maps and timetable booklets among others. Real time information systems, on the other hand use advance technology to provide schedule-only information and are derived from automatic vehicle location systems. This information is provided to passengers by mobile phone applications, platform-level signage and automated public address systems among others. CLICK TO DOWNLOAD SAMPLE REPORT 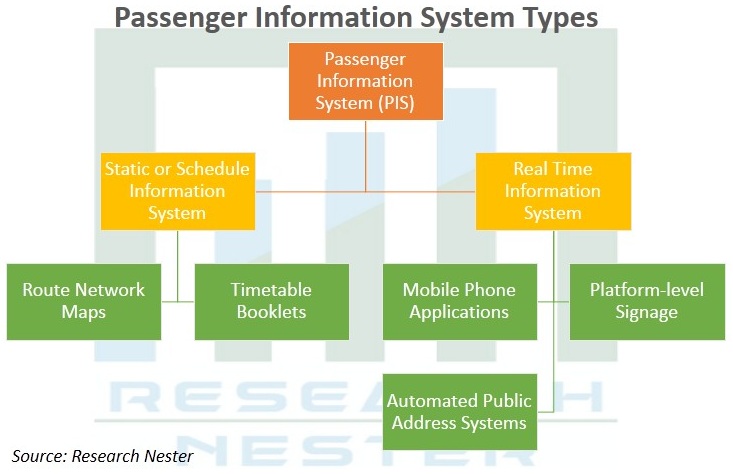 The global PIS market is thriving on the back of rising demand for transit agencies to deliver reliable and accurate real-time transit information to passengers coupled with the advent of smartphones and the need amongst the passengers for better connectivity information. Traditional methods of delivering the scheduling information were manual, owing to which, a passenger had to visit the station to know the exact arrival or departure time. But with the advancement in technologies and availability of technologically advanced solutions, passengers are able to get information on the go. Additionally, rise in the number of passenger journeys made by public transport every year is also anticipated to contribute significantly towards the growth of the global PIS market. According to the statistics by International Association of Public transport (UITP), the total number of passenger journeys made by public transport every year in the European Union is almost 60 billion. In comparison, long distance rail accounted for 1 billion passenger journeys and commercial aviation for 800 million. Additionally, global ridership evolution for metro railways increased from 45,051 million passengers in the year 2012 to 53,768 million passengers in the year 2017. 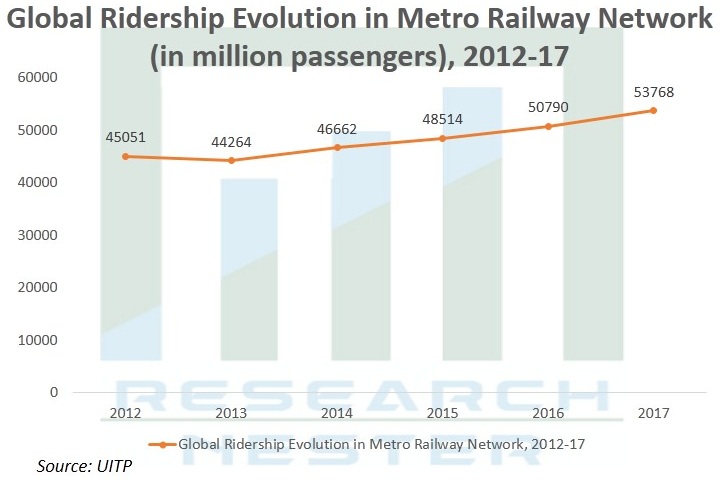 The market is anticipated to record a CAGR of 15.27% throughout the forecast period, i.e. 2019-2027. The global passenger information system market is segmented by transportation mode into railways, airways and roadways, out of which, railways segment is anticipated to hold the largest market share on the back of development of new railway projects, which will require the deployment of passenger information systems, coupled with favorable growth projections for several new metro railway lines along with conventional railway lines. Additionally, growing utilization of PIS in smart railways projects, the market which was valued at USD 14, 328.9 million in 2018 and is anticipated to achieve a CAGR of 14.7% by 2027 with a market value reaching USD 48, 778.1 million, is expected to drive the growth of the global PIS market. According to UITP, over 200 new lines are predicted to open in most regions of the world by the year 2022. 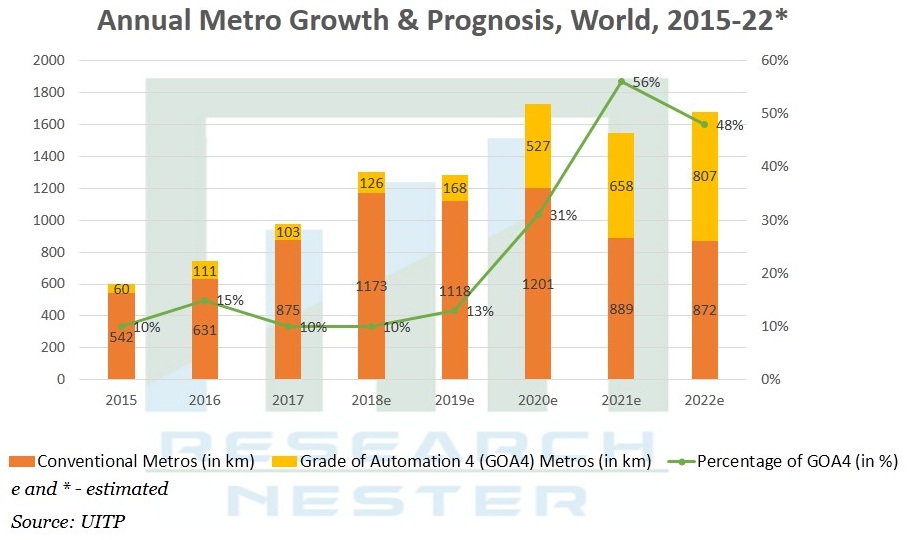 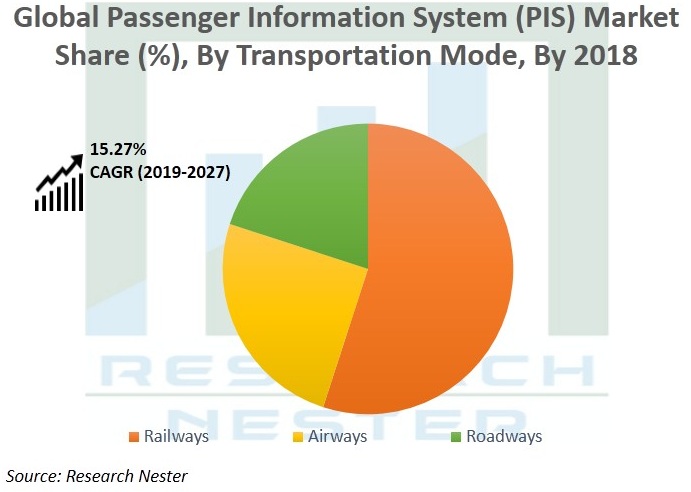 On the back of rising adoption of smartphones, people travelling around the world are raising the demand for mobile application-based passenger information systems, which can help them keep on track while on the go. Transit agencies are focusing on mobile applications of PIS so as to attract the passengers and provide them with quick and real-time information through smartphone channel. Additionally, with the emergence of multi-modal transit app for public transport, and the rise in the mobile subscribers worldwide, all of these factors together are anticipated to contribute significantly towards the growth of the global PIS market over the forecast period.

With advancements in technology and technological infrastructure, aided by several favorable policies of the governments of nations, such as, smart cities, internet of things (IoT), big data, cloud computing and others, different modes of transportation around the globe are adopting for automation of processes. PIS utilizes cloud computing technology to track the position of vehicles, such as public buses, trains, and airplane among others. The arrival time is then calculated using technologies, such as streaming analytics and then displayed on the real-time information system at the bus stop. Cloud technology and data analytics solutions thereby aid in providing high efficiency in allocating resources and monitoring the passenger population in a cost-effective manner. All of these factors are anticipated to contribute towards the growth of the global PIS market.

Our in-depth analysis of the global pet toys and training market includes the following segments: 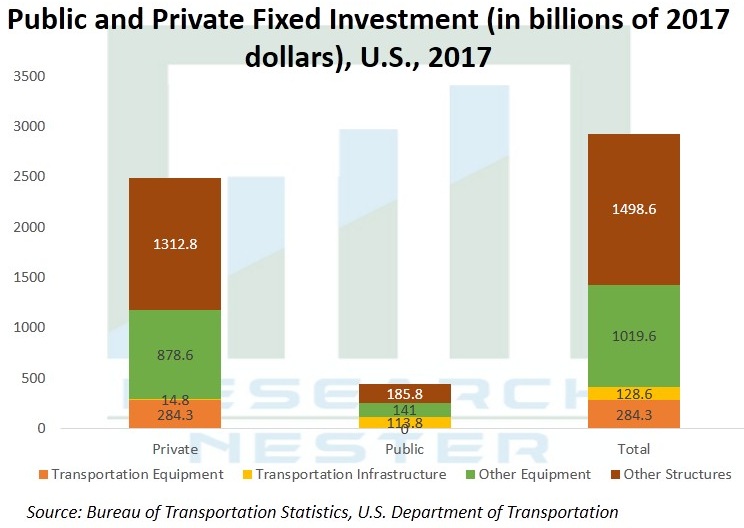 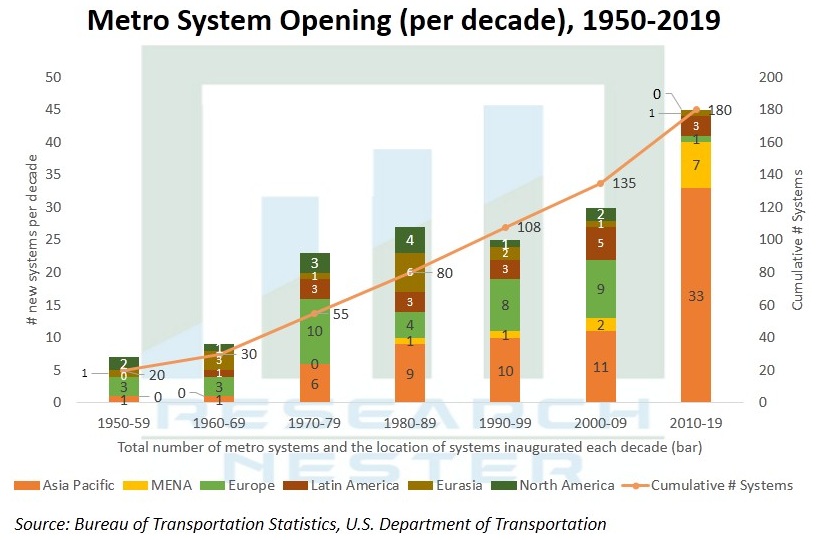 The global PIS market is further classified on the basis of region as follows: