Most young children are enrolled in early education and child care programs, and these programs can take steps to prevent and control influenza. Seasonal influenza outbreaks are expected annually. Influenza can be severe, resulting in hospitalization or death of some children. Immunization against influenza is the best strategy to reduce infection and spread, yet immunization is not 100% effective. Out of some immunized children, few may even still get sick and spread infection. Influenza generally is an acute, self-limited, and uncomplicated disease among healthy children. It is caused by influenza A or B virus and sometimes by type C virus with yearly outbreaks. This is an acute respiratory illness which occurs more frequently during the seasonal changes in temperate climates.

There are generally two drugs recommended for antiviral treatment of influenza in duration of 5 days such as oseltamivir or zanamivir. Patients who remain severely ill after 5 days of treatment are considered for longer treatment courses. Uncomplicated influenza is treated with intravenous peramivir for the duration of one day. The most common symptoms of influenza include high fever, runny nose, headache, muscle pains, coughing, sneezing, sore throat, and feeling tired. There are policies for the prevention and control of influenza that is updated every year by both the Centers for Disease Control and Prevention (CDC) and the American Academy of Pediatrics (AAP). According to the recent policies, depending on the child’s age at the time of the first administered dose and his or her vaccine history, the number of seasonal influenza vaccine doses will be administered in the 2017-18 influenza season.

Pediatric Influenza Treatment Market is anticipated to record a significant CAGR of over 3.2% the forecast period. The market is also anticipated to value at USD 929 Million by the year 2027. Many multi-national companies are concentrating towards new product advances in pediatric influenza treatment market. For instance, Roche’s oseltamivir (Tamiflu), with an oral capsule formulation overshadowed GSK’s zanamivir (RELENZA) revenue of USD 13 million just after entering the market in the past.

Asia Pacific is expected to drive demand and positively impact Pediatric Influenza Treatment market growth over the forecast period on the back of increasing children population in the developing regions of Asia-Pacific. Furthermore, increasing breakouts of pediatric influenza in temperate regions of the world is anticipated to expand the demand for pediatric influenza treatment across the region over the forecast period. 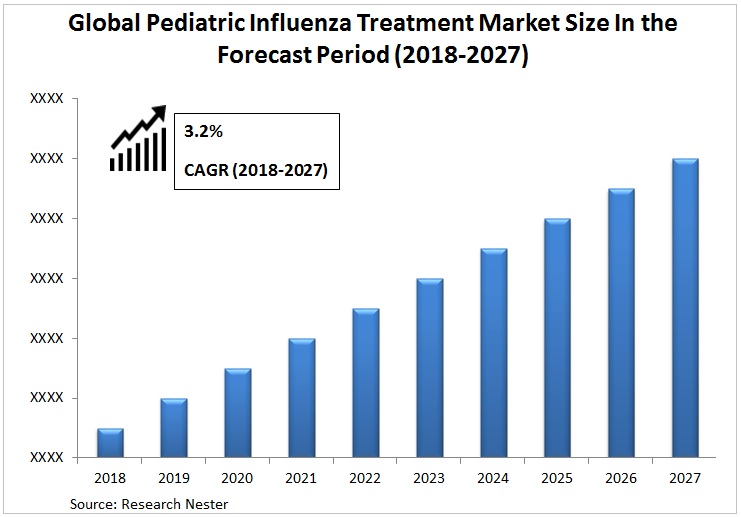 By Mode of Action

Global Pediatric Influenza Treatment Market is further classified on the basis of region as follows: 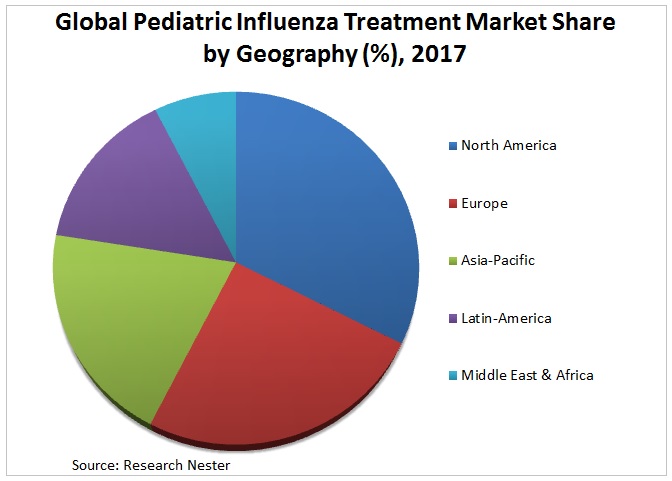 However, usage of low cost non-prescribed drugs, limited number of options to treat influenza in the developing economies with cost constraints attached to it is expected to behave as the major restraints in the growth of the pediatric influenza treatment market over the forecast period.