The global optically clear resin market is estimated to garner a large amount of revenue by growing at a CAGR of ~8% over the forecast period, i.e., 2022 – 2031. The growth of the market can be attributed to the increasing demand for consumer electronics, such as smartphones and LCD televisions, and growing technological advancements in the adhesive industry. In 2021, the total number of smartphone users in the world were about 6 billion. Also, from 2016-2021, the total number of smartphone users grew at an average rate of 12% annually. Along with these, optically clear film adhesives have excellent adherence to a variety of transparent substrates. As a result, they are extensively used for increasing the electrical and mechanical performance of screens, including their contrast and brightness, which in turn is also expected to drive market growth significantly in the upcoming years. Furthermore, rising usage of the resin in display screens in aircraft cockpits is projected to significantly expand the market in the near future. 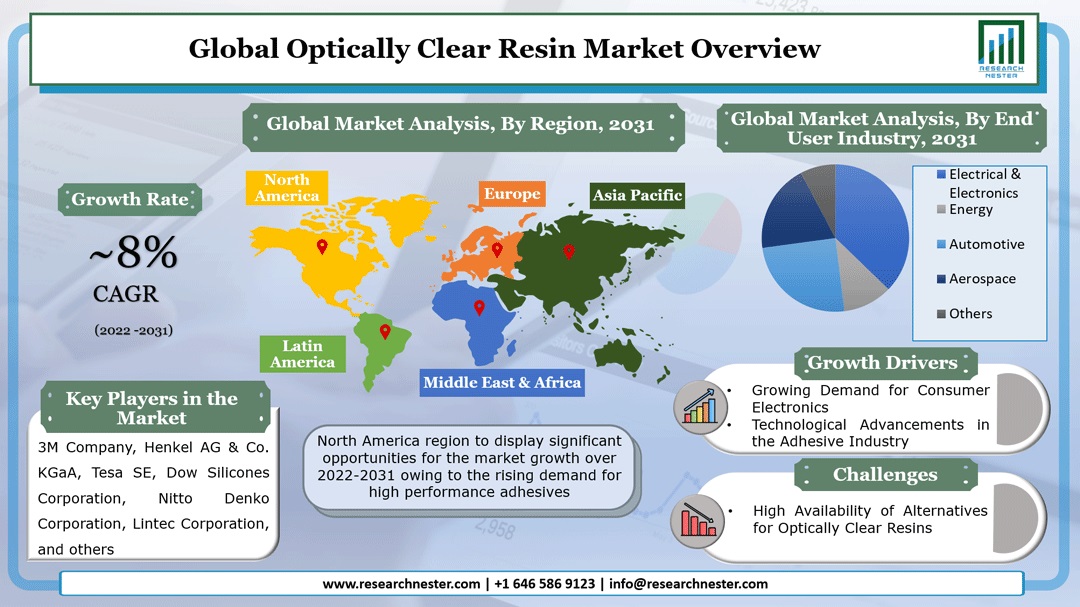 The market is segmented by end user industry into electrical & electronics, energy, automotive, aerospace, and others, out of which, the electrical & electronics segment is anticipated to hold the largest share in the global optically clear resin market. This can be accounted to the high utilization of the resin in touch screen and display applications for mobile devices, televisions and laptops. Apart from this, optically clear resins are used as a core material for improving the optical performance of displays and sensors, which is also predicted to boost the growth of the market segment in the future. Additionally, on the basis of resin type, the epoxy segment is assessed to observe robust growth during the forecast period owing to the high mechanical properties, ease of processing, and excellent adhesion to a variety of materials of this resin. CLICK TO DOWNLOAD SAMPLE REPORT

Regionally, the global optically clear resin market is segmented into five major regions including North America, Europe, Asia Pacific, Latin America and the Middle East & Africa region. The market in Asia Pacific is estimated to occupy the largest share over the forecast period on the back of the growing demand for electronic items, and rising sales of electric vehicles in the region. About 1.3 million battery electric vehicles were sold in the Asia Pacific in 2020, up from 1 million and 0.95 million units of BEVs in the years 2019 and 2018 respectively. In addition, strong presence of prominent market players is also expected to fuel the market growth in the region in the coming years. Moreover, the market in North America is projected to witness noteworthy growth during the forecast period ascribing to the increasing demand for high performance adhesives from the automotive sector, and rising R&D investments in the aerospace industry in the region. 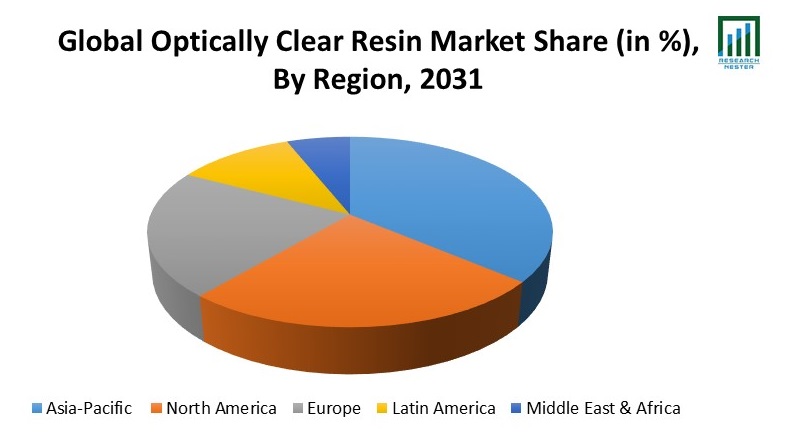 The global optically clear resin market is further classified on the basis of region as follows:

What are the major factors driving the growth of the optically clear resin market?

The major factors driving market growth are increasing demand for consumer electronics across the globally, and growing technological advancements in the adhesive industry.

What would be the CAGR of optically clear resin market over the forecast period?

Who are the major players dominating the optically clear resin market?

What are the segments in the optically clear resin market?

The market is segmented by resin type, end user industry, and by region.

Which segment captures the largest market size in the end user industry segment in the optically clear resin market?

The electrical & electronics segment is anticipated to hold largest market size and is estimated grow at a notable CAGR over the forecast period and display significant growth opportunities.

Availability of alternatives for optically clear adhesives is estimated to hamper the market growth.

Which region will provide more business opportunities for growth of optically clear resin market in future?

North America will provide more business opportunities for market growth owing to the increasing demand for high performance adhesives from the automotive sector in the region.