Small and micro satellites provide an opportunity to experiment and train that leads to increase in the inclination of their adoption. Small satellites market is witnessing continuous advancements in technology on account of their simple and faster construction and design requirements. The low cost of these satellites has widened the range of possible space missions in various verticals. Simplified designing and development allows the incorporation of latest technologies such as Artificial Intelligence (AI) and robotics in small satellites to enhance their capabilities.

These satellites use Very High Frequency (VHF), Ultra High Frequency (UHF) and visible transmission in order to increase the signal frequency and transfer speeds. The use of these frequencies help in acquiring large data that ultimately reduces continuous monitoring from the ground. This helps in simplifying and reducing cost of the ground stations.

The global nano and micro satellite market was valued at USD 1.29 Billion in 2018 and is estimated to reach USD 5.1 Billion by 2027. The market is anticipated to record a CAGR of around 20.8% over the forecast period i.e. 2019-2027. The market is segmented by application & end users. The market is segmented by application into scientific research, earth observation/ remote sensing, communication & navigation, technology and academic training, others out of which, the earth observation/ remote sensing segment is anticipated to have leading shares on account of several governments continuing to invest in the earth observation and meteorology projects, for instance, as per the U.S. Group on Earth Observations, the U.S. government has allocated more than USD 3 Billion per year for the civil earth observations and space-related missions. The importance of large amount of data collected from Earth observation satellites is growing and has its application in various areas such as agriculture, urban planning, mineral prospecting, disaster management, water resources and ocean resources. The need for earth observation data is rising in geo-information products and central role of Big Data is increasing that is reinforcing the development potential of various commercial activities. CLICK TO DOWNLOAD FREE SAMPLE REPORT

The market is further segmented by end users into defense & security, commercial, government, civil, others out of which, commercial segment accounted for the largest share in the market owing to increase in broadcasting, communication and navigation activities. Defense and security segment is anticipated to have significant growth attributing to small satellites playing an important role in defense space architecture in order to enhance operational support to military forces. The need for expanding the lifespan of military use satellites is increasing vastly.

Launch of the small satellites through heavy vehicles has been quite challenging in recent years and has resulted in increased demand for the development of small launch vehicles. Conventionally, small satellites used to launch as an additional payload with large satellites that give rise to cost and launch constraints. The increasing need for small launch vehicles can overcome these cost constraints and lead to the development of Small Satellite Launch Vehicles (SSLVs).

Rise in the demand for micro satellite in the Earth observation application and the low manufacturing cost of the nano and micro satellites are the factors that are predicted to enhance the growth of the market. Investments in the nano and micro satellites technologies have been increasing since the last few years which has brought some innovations in the market. The demand for these satellite is increasing in various applications. These factors are anticipated to propel the market growth and create vast opportunities for the manufacturers in the market in the near future.

Lack of dedicated launch vehicles in order to launch the micro satellites into the space and the concerns related to the space debris is anticipated to hinder the growth of the market during the forecast period. Furthermore, the implementation of stringent rules and regulations related to the rising number of satellites to be launched is expected to hamper the growth of the market.

North America is anticipated to hold largest share in the market and witness healthy growth in the near future owing to the rising contribution from the U.S. Additionally, advanced technologies that are estimated to assist space research and the presence of space research universities are the factors that are predicted to enhance the growth of the market. Every year, the country is launching a large number of nano and microsatellites for various applications. In 2018, U.S. launched around 150 satellites and twice the number of these satellites are about to be launched in 2019. Europe is anticipated to be the fastest growing region on account of the companies investing more in the nano satellite technology. Furthermore, startups and universities in Europe are now collaborating with the launch service providers in order to launch their own nano and micro satellites. Asia Pacific is projected to offer lucrative opportunities in the near future attributing to increasing focus on the development of network infrastructure and research and development activities. 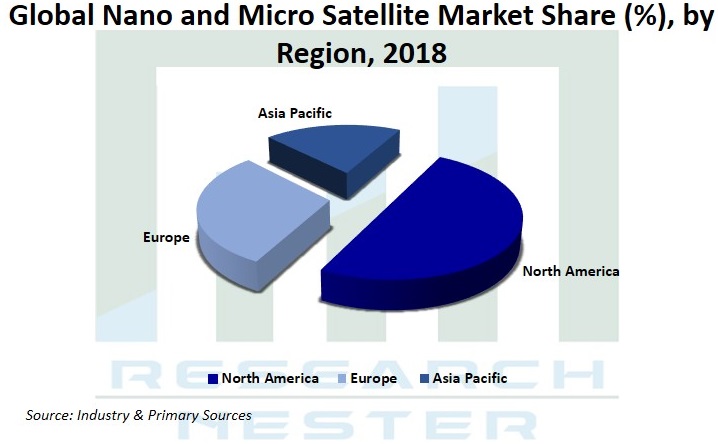 The global nano and micro satellite market is further classified on the basis of region as follows: