Mushroom is a fungus which has a stem, cap and gills. Mushrooms are source of various nutrients such as selenium, vitamins and potassium. Mushrooms contain very less amount of gluten and are fat free. Mushrooms usually have short lifespan and its cultivation is different from other plants owing to the lack of chlorophyll.

The global mushroom market is observing robust growth on account of increasing disposable income and changing food habits, thereby driving the demand for mushroom. Advancement in food industry in the past few years and growing preservative processes regarding mushroom is projected to drive mushroom market. Additionally, growing population is also expected to propel the market growth of the mushroom market globally.

As per CBS StatLine Databank, the global consumer price index (CPI) of mushroom has decreased from 2012 to 2017. This has increased the demand for mushroom. The high consumer price index of USD1.3 in 2012 has dropped to USD0.85 in 2017. The global mushroom market is anticipated to record CGPA of 8.7% during the forecast period. The mushroom market is expected to reach a value of USD 70 billion at the end of the forecast period. 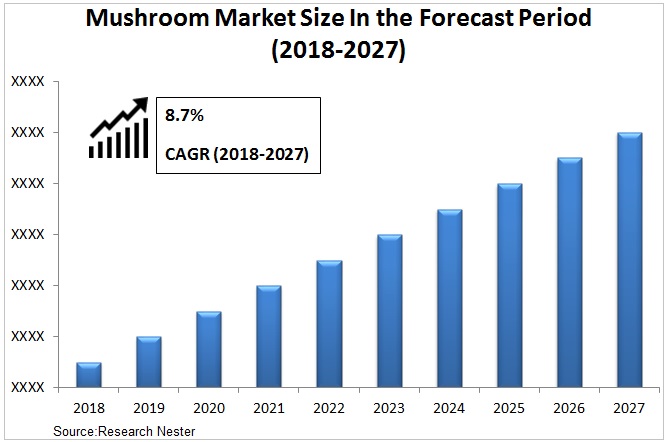 Government and international agencies are continuously investing on research and developments for improving the mushroom quality. Biotechnology holds a vital role for the mushroom breeding process. Biotechnological advancements is expected to drive the mushroom market during the forecast period.

Changing food habit changes coupled with growing awareness regarding healthy diet is projected to flourish the growth of the market. The mushrooms contain less fat and cholesterol which increases the demand for the mushroom. Mushroom are rich in nutrients such as vitamins and minerals .This is expected to drive the market growth of mushroom during the forecast period.

The mushrooms are very delicate owing to its short lifespan. It can be preserved by various preservation techniques which increases the cost .Thus, limited shelf life of mushroom is expected to hinder the growth of mushroom market.

Global mushroom market is further classified on the basis of region as follows: