Magnetic Resonance Imaging or MRI is a diagnostic imaging scan that uses magnetic fields along with radio waves to produce detailed images of the internal organs and tissues of the body.  The MRI system consists of a scanner that is a tube-like structure into which a person lies either head-first or feet-first, depending on the part of body to be scanned. No metal object is allowed inside the room where MRI is conducted in order to prevent the metal from interrupting with the magnetic fields and cause harm to the patient. MRI scans are used to detect a disease or disorder at an early stage. These include cancer, cardiac disorders and others. The scan is also used to detect injuries and to check the functioning of the internal organs.

According to diagnostic imaging statistics by the National Health Service, England, there were around 41 million imaging tests reported in the country between February 2016 and January 2017. Out of these, 0.28 million tests that were performed in January 2017 were Magnetic Resonance Imaging (MRI) tests. The large number of imaging tests that are conducted for diagnostic purposes is anticipated to substantially raise the demand for MRI scans in the upcoming years. 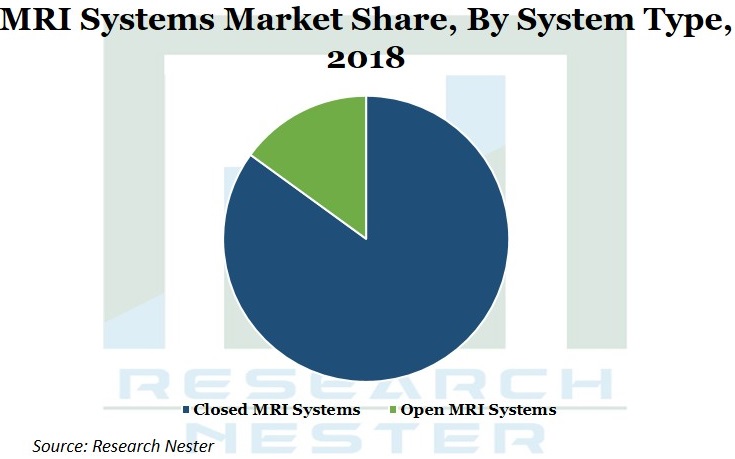 Growing Awareness Among People For Early Diagnosis Of Health Disorders

MRI is one of the safest diagnostic scan methods as it does not produce any harmful radiation, as in the case of x-rays and CT scans. The high quality of images produced allow medical professionals to diagnose accurately. These factors raise the demand for MRI as opposed to other diagnostic imaging scans which is estimated to boost the market growth in future.

The rise in elderly population across various regions globally increases the demand for regular diagnostic scans in order to detect the onset of any health disorders among them. WHO estimated that by 2020, the number of people above the age of 60 will outnumber the children below the age of 5. Moreover, the proportion of the world’s population aged 60 years and older was estimated to increase from 12% to 22% between 2015 and 2050. This is estimated to significantly propel the growth of MRI systems market during the forecast period.

Since MRI scans use magnetic fields and radio waves to produce an image of the body, there should be no metal product present around the MRI system as it could interfere with the imaging procedure and harm the patient as well. Further, pregnant women, especially those in the first trimester, are advised to not get MRI scans as it could negatively affect the development of the fetus. These factors are estimated to restrict the market growth.

Our in-depth analysis of the MRI systems market includes the following segments:

Based on these regions, the MRI systems market in North America is anticipated to hold the largest share in the market and retain the highest market revenue globally during the forecast period on account of growing technological advancements in the region and increasing expenditure by people on healthcare, including diagnostic tests. According to the World Health Organization, the health expenditure incurred by the North America region was recorded to be around 16.58% of the GDP in 2016. The market in Asia-Pacific region is estimated to grow at a significantly high rate during the forecast period as a result of rising population in the region, out of which, a large section includes the geriatric population. Entrance and expansion of major key players into the market in this region is projected to be another growth stimulating factor for the MRI systems market.

The MRI systems market is further classified on the basis of region as follows: