A military night vision device is highly advanced optical instrument that allows images to be produced in levels of light approaching total darkness. Night vision device refers to a complete unit including an image intensifier tube, water resistance housing, mounting system, illuminators and telescopic lenses. They provide the user to sense objects and humans in the dark. Night vision devices give armed forces a massive advantage over enemy combatants, allowing soldiers to conduct vital military operations in the dead of night, when the opposing force is at its most vulnerable. Another advantage is its rapid target acquisition feature. This feature improves shooting by simultaneously displaying the weapon sight imagery. They allow the shooter to aim the weapon without bringing it up to the shoulder. They are used by soldier or riflemen to helicopter pilot, tank and other military vehicle drivers. The growing necessity of modern army to operate at night and during poor visibility conditions has led to the substantial advancement in the technology of night vision device. Night vision device are the most crucial equipment for a soldier during the war. As a result, significant investment has been done in the research and development of the night vision device technologies.

The global military night vision device market is anticipated to record a CAGR of around 10% over the forecast period i.e. 2019-2027. This growth is on the account of rising terrorist attacks and focus on counter operations, increasing incidences of border trespassing and focus on border protection. With the increased spending by the government on the devices to fulfill patrolling and combat operations is one of the major factors driving the growth of global military night vision device market. In recent years, the U.S. Army placed orders worth USD 97 million for night vision devices and thermal weapon sights. The investments are important in making sure that the military operations continue to be efficient.

The military night vision market is segmented on the basis of device type, by technology and by applications. On the basis of device type, military night vision market is segmented into goggle, camera and scope. Out of which goggle segment is estimated to hold major market share attributed to the equipment being detachable and lightweight in nature. Moreover, the role it plays in increasing the situational awareness of soldiers can boost its demand in the coming years. Based on the applications, military night vision market is segmented into surveillance, navigation, targeting, and others. Out of which surveillance segment is anticipated to witness fast growth. To protect the people from growing threats of terrorism, governments are spending on surveillance systems to imbue situational awareness amongst soldiers. 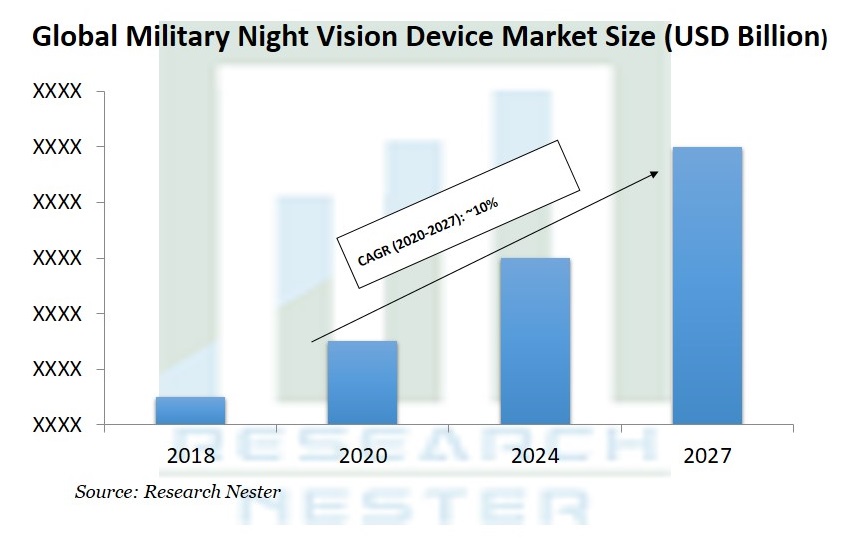 The addition of thermal imaging technique into night vision devices is proving to be a great innovation. Night vision provides soldiers with greater situational awareness by illuminating the surroundings during night time operations, while thermal imaging help soldiers locate a target in poor visibility conditions. This integration innovation  provide soldiers the ability of sight in low visibility conditions, such as fog or heavy smoke, and handles the seamless transition from day to night and from far-sight to close-up.

Night vision devices are becoming considerably cheaper, and are being procured by the common people for a wide variety of applications, ranging from hunting to paranormal research. Currently, there are a number of investments by companies, such as BAE Systems Plc, Elbit Systems Ltd, FLIR Systems Inc., on military night vision device, which would significantly drive the market growth. The rising terrorist attacks and focus on counter operations, increasing incidences of border trespassing and focus on border protection are the key factors driving the growth of global military night vision market.

Increased usage of drones is the major factor hampering the growth of military night vision market. The reduced government spending on vision equipment will significantly hamper the growth of the market during the forecast period.

Global military night vision device market is further classified on the basis of region as follows: